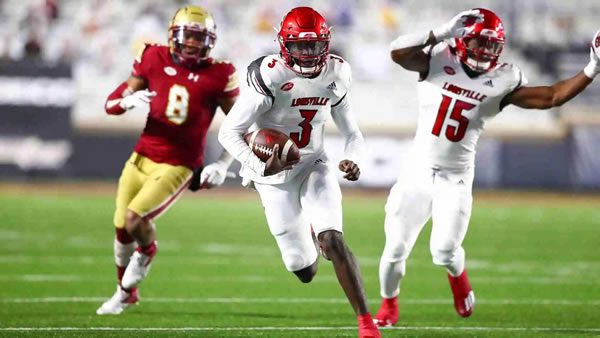 For just the second time since their national championship season, Central Florida gets to welcome an ACC team to Orlando, as Louisville makes the return trip after the Knights went up to the River City a season ago. That game featured points aplenty, and this one might be more of the same. Well, at least it might be more of the same from the Central Florida side, as the Knights looked very good in Week 1 and are expected to contend for the conference title in their final year in the American Athletic Conference.
On the other hand, Louisville looked like a mess against Syracuse and could be watching this season quickly spiral out of control if it can’t get back on track here. With a resurgent Florida State coming to Cardinal Stadium next week, the Cardinals are now staring at the very real prospect of 0-3 after losing to the Orange for the first time since 2018. That was the year Bobby Petrino crashed and burned to a 2-10 finish, and Louisville looked a lot like the 2018 team in getting drilled by Syracuse because the old road issues popped up again. Over the past four seasons, Louisville is just 4-15 on the road, and one of the wins was over Duke last year, so it’s not like that was an impressive victory. The Cardinals have played well at home lately, but when they go on the road, it’s almost like they forget how to play football.

How the Public is Betting the Louisville/Central Florida Game

The public is riding with Central Florida after Louisville’s poor performance on opening night, with the Knights getting 76% of the tickets in this matchup. The total has held steady at 61.5, while the line has bounced back and forth between -5.5 and -6.5 for UCF.

Whatever happened with Malik Cunningham against Syracuse has to change, or Louisville isn’t going to do much of anything this season. Cunningham had a few short, safe completions and only failed to connect with his receivers on six pass attempts, but two of his six missed passes landed in the hands of opposing defenders. Cunningham also fumbled twice and lost one of them, eliminating any chance of Louisville coming back in the second half. The Cardinals saw their final four possessions end with either a turnover or a turnover on downs, which turned a tight game into the 24-point rout that it became.

There was some good on offense, however, as Tiyon Evans averaged more than six yards per carry when he took the ball. If Louisville is going to have any real success in this game, Evans needs to get the ball far more than Cunningham. Evans should be able to both keep drives going and keep the potent UCF offense on the sidelines, which is what Louisville must do if it’s going to take the crowd out of the contest in the first half.

There are a few things to take away from how Central Florida dissected South Carolina State, as the Knights slammed the Bulldogs in the second half after allowing them to hang around in the third quarter. On the one hand, Central Florida really didn’t go for the throat in this game because anything it tried was going to work against South Carolina State, but on the other, it’s a little worrisome that the Knights slacked off in the third quarter and couldn’t finish the job without some help from the special teams.

The biggest question here is whether John Rhys Plumlee can actually keep the yards coming, as Central Florida went for 600 yards in game one. Plumlee played well when he was at Ole Miss and has a solid running attack with Isaiah Bowser in place at UCF. The Knights are all about offense most of the time, and the Cardinals showed that they can be attacked successfully with an offense that’s willing to go at them consistently.

When name teams come to Orlando, they usually get beaten and usually find that UCF has covered the spread in the process. Pittsburgh, Stanford, and Boise State have all made the trip to Orlando, and all of them left beaten, with only the Broncos managing to cover. Louisville did cover the last time the teams met, but that was also in Louisville, where the Cardinals are a much different team. In fact, the same can be said about UCF; the Knights lost two of their past three trips to ACC schools over the past four seasons.
UCF also tends to put up a lot of points when it plays Power 5 squads: in its past five games against Power 5 opponents, the Knights and the opposition have combined to score at least 59 points every time.

There’s a chance these teams could be dealing with a lot of inclement weather in this situation, as there’s a 25% chance of precipitation with thunderstorms scheduled to hit Orlando. Temperatures won’t be a problem, with temperatures hitting 75 degrees, and wind will blow at five miles per hour.

Louisville probably can’t be as bad as it looked in Week 1, but the Cardinals looked very worrisome in the first week and aren’t a very good team when they leave the River City. They’re also going into Orlando, which has been a death sentence for many teams who looked a lot better than Louisville did on opening night.
I think the Cardinals will get better, but there’s no way I’m touching them here. I like the over as my main play, and for the spread, give me the Knights. Bet this game at the sportsbook where you get the most bang for you buck! Check this out… You get a 125% real cash bonus up to $400 when you use bonus code PREDICTEM. They’ll give you a free half point every time you bet your favorite NFL, college football, NBA and college basketball team AND they have a sweet player loyalty program where you get points everytime you bet that can be redeemed for free wagers! Find all this and more at GTBets Sportsbook!