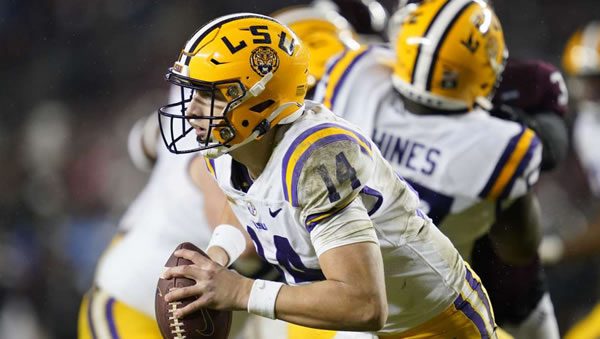 (Best teaser odds >>> Did you know you can bet 20 point football teasers?)

A year ago, this was the game that exposed LSU as coming down from the highs of the Joe Burrow era, as the Tigers were utterly unprepared to deal with a Mike Leach offense and got shredded for 44 points in the season opener. Of course, that was also the game that taught the rest of the SEC exactly how to handle Leach’s offense (because Leach never does anything different), and the Bulldogs scored 30 points in the four games that followed their win over the Bayou Bengals, so this was the rare proverbial game that helped neither team.

Fast forward a year, and both teams appear to be in trouble again. LSU has moved the ball well this season, but the Tigers couldn’t stop UCLA in their season opener and haven’t yet developed a running game. Mississippi State is, of course, dead last in the country in running the football and not really scoring as much as it should at the same time. The question is, have the Tigers learned their lesson from a year ago, and are they ready to do what the rest of the SEC had no trouble doing a year ago?

How the Public is Betting the LSU/Mississippi State Game

The public believes in the Tigers here, but the sharps believe that LSU hasn’t learned anything from a year ago and is expecting Mississippi State to stay under the hook. So far, 60% of tickets are on the Bayou Bengals, but the spread has moved a point in Mississippi State’s favor from +3.5 to +2.5, with the total dropping by a point from 57 to 56.

With Myles Brennan on the shelf, it’s officially the Max Johnson show in Baton Rouge, and so far, things are working out pretty well. After a bit of a rough debut against a good UCLA squad, Johnson has put up strong numbers against McNeese State and Central Michigan. While his connection with Kayshon Boutte isn’t going to make anyone forget Joe Burrow to Justin Jefferson, it’s still a pretty solid pairing. Boutte has 20 catches for 224 yards and already has more touchdowns in 2021 than he did in all of 2020, scoring six in the first three games.
But there’s a big problem for LSU, and that’s the fact that the Tigers can’t keep opposing offenses off the field because they cannot run the ball. Tyrion Davis-Price has seen his yards per carry fall to an anemic 2.7, and the Tigers as a whole are averaging just three yards per carry. This was a 78-point shootout last year in Baton Rouge, and this could be another high-scoring contest.

It’s hard to believe that Mississippi State could actually be worse at running the ball than it was a year ago, but Mike Leach’s commitment to running the ball has gone to nonexistent in year two in Starkville. Jo’quavious Marks and Dillon Johnson actually have more catches (38) than rushing attempts (37), which tells you just how infrequently Leach attempts to pass out of the air raid.
The good news for the Bulldogs is that Will Rogers looks very comfortable in the offense in year two, and Cal transfer Makai Polk has stepped up to become his favorite target this season. Polk isn’t the man the Bulldogs count on for touchdowns (that’s Jaden Walley, who has three scores out of eight from Rogers), but he leads the team in both catches and yards, which are keys to Leach’s offense. As long as the ball’s moving, Mississippi State is always a threat to score.

More Picks: Akron at Ohio State Pick Against the Spread >>>

If you were a savvy bettor, you stuck with LSU last year on the road even after the Tigers started 2-3 with road defeats at Missouri and Auburn. That’s because once those games were past them, the Bayou Bengals started to figure it out, covering in their final three road games of the season. In fact, LSU is 10-4 ATS in its last 14 trips away from Baton Rouge, and the Tigers have done well with following up losses with wins, as they’ve covered in five of six after an ATS loss.

Meanwhile, Mississippi State has been at its best when it’s been an underdog under Leach, as its only cover this year came when the Bulldogs were getting a point against N.C. State. But the Bulldogs have also covered in three of their past four as an underdog, with the lone exception being a 14-point setback against Auburn. Backing the underdog has also historically been a good play here, as the dog is 5-2 ATS in their past seven matchups.
The under has also tended to come through here, as it’s gone 5-1 in the teams’ past six meetings. But in the name of accuracy, the one exception was the only game that Leach has been involved in, so take the past with a grain of salt.

It’ll be warm but pleasant in Starkville on Saturday afternoon, with temperatures hitting 80 degrees and winds blowing at just five miles per hour to the west.

Defensive coordinator Daronte Jones isn’t Bo Pelini and isn’t going to stubbornly resist the best way to beat a Mike Leach offense. The Tigers should have the more talented team and aren’t likely to take this game lightly after what happened a year ago. The Tigers have won on nine of their past ten trips to Starkville, and they’ve got an excellent chance to make it 10 for 11 and get the cover here. I’m backing the Bayou Bengals. Bet your Week 4 college football picks for FREE by scoring a 100% real cash bonus on your first deposit up to $1000 at BetNow!