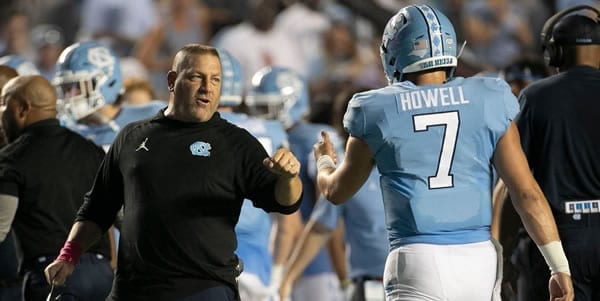 This probably wasn’t where either one of these teams was expecting to end their season when they completed September. Temple couldn’t make headway in a tough American. Carolina proved that its hot start was more of a combination of South Carolina and Miami being less than expected rather than their own strength. The Heels’ main issue was that they played so many tight games, as nine of their 12 contests were decided by seven points or less, including all six of their defeats. Temple wasn’t really one to play close games, as three of its four losses were by at least 16, and six of the Owls’ eight wins came by double digits.

How the Public is Betting the North Carolina/Temple Game

The line has pulled toward the Owls, dropping from six points at the open to 4.5 now. The total, however, has held steady at 53 points.

Offensive lineman Matt Hennessy and safety Benny Walls are both questionable with an upper-body injury.

It’s not always wise to build around a freshman, but that’s what North Carolina has chosen to do with Sam Howell, and it’s proven to be a solid decision, as he’s tossed for 35 touchdowns and just seven interceptions this season. Howell is riding a streak of four straight games with at least three touchdown passes, and while Mercer and N.C. State wasn’t exactly stiff opposition, the Heels did also face bowl-bound Pittsburgh and ACC Coastal champion Virginia, and Howell had no problems there either.

What really helps make Howell effective is that he’s got a great two-tiered running game to back him up, as Michael Carter and Javonte Williams have combined for 1,767 rushing yards on the season. Neither man is known for producing touchdowns, as Carolina prefers to use the ground game to set up Howell’s arm. The tandem has a mere eight touchdowns on the season, which is three less than leading receiver Dyami Brown has on his own. Brown and Dazz Newsome are both solid prop bets to pick up a touchdown, as they each accumulated 947 receiving yards and combined for 19 of Howell’s 35 touchdown passes.

What Howell is to North Carolina, Anthony Russo is for Temple. Russo isn’t quite as adept at decision-making or accuracy as Howell, but he’s been a reliable signal-caller for the Crimson and Cream, throwing for 21 touchdowns and 11 interceptions this season. However, Russo’s yards and scores have tailed off down the stretch while Howell’s have gotten stronger, as Russo has thrown for just seven scores and five interceptions in the Owls’ past five games. Two of those were against the American East’s top two squads in Cincinnati and Central Florida, but Russo also faced Connecticut and didn’t do much, throwing for only two touchdowns against the Huskies’ awful defense.

The Owls are pretty dependent on Russo because their running game isn’t the strongest. Re’Mahn Davis has managed 900 rushing yards, but he’s needed 178 carries to do it, and the running attack doesn’t get much stronger from there. For production, look more toward wide receiver Jadan Blue, who caught 87 balls for 975 yards this season. But here again, Temple’s had its problems getting to the end zone, as just four of Blue’s catches ended in the end zone.

As the schedule got more difficult, the Tar Heels’ covers became less common. North Carolina is just 2-5 against the spread against a team with a winning record. However, when the Heels are favored, they’ve been pretty reliable, winning four of five ATS. Meanwhile, the Owls have been fairly solid in the non-conference, winning five of their past seven outside of the American. When it comes to the totals, the Heels have generally tended to play a lot of shootouts, as the over is 8-3 in their past 11 against a team with a winning mark. That fits well with Temple, which has gone over in four of its past five against ACC opposition.

Annapolis can be an unpleasant place to be after Christmas, but this won’t be the case for this game, as the temperature will be around 50 degrees on a cloudy day.

There’s been a history of the ACC representative failing to show up in Annapolis and getting drilled by a hungry opponent from the American. I don’t think that’s going to happen on this occasion, because the ACC has heard all year about how the American might be the better football conference outside of Clemson. Carolina would love to get a seventh win to set itself up for a big second season for Mack Brown next year, and given that most of its toughest opponents will come to Chapel Hill next season, the Heels are in great shape to make that happen if they get off to a strong start.

That should be a good bit of motivation for a young team, and I think the Heels come out determined to make a good showing and get themselves ready for 2020. Throw in that Russo wasn’t playing all that well down the stretch, and I think this five-point spread might be too low. I’m taking the Heels.