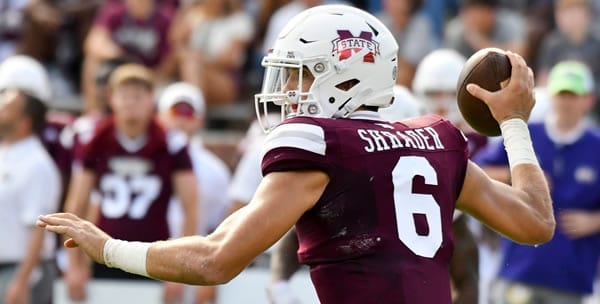 You could make a serious case that Mississippi State is here only because Mississippi lost its better judgment and missed an extra point in the Egg Bowl, granting the Bulldogs a narrow 21-20 escape over the Rebels and landing Lane Kiffin a new job in Oxford. But before Mississippi State can worry about dealing with the Lane Train, there’s now the not-so-small matter of dealing with Scott Satterfield’s Cardinals, who have turned themselves around quite a bit in his first year in Louisville.

However, the Cardinals took a giant step back in their season finale against Kentucky, losing 45-13 to the Wildcats to close their season on a rather embarrassing note. That’s raised questions as to whether Louisville’s record is a real step forward or was just a product of playing in a lousy ACC, which was basically Clemson and the 13 dwarves this season. The Cardinals did manage to beat ACC Coastal champion Virginia, but they also suffered a pair of head-scratchers against Florida State and Miami, both of whom were very beatable opponents but won by double digits against Louisville. In short, this is a tough team to figure out.

How the Public is Betting the Mississippi State/Louisville Game

The line has ticked up to Mississippi State -4 from 3.5, and the total has increased a point since the opening at 62.5.

Louisville: Offensive lineman Mekhi Becton has opted out of the bowl game to prepare for the NFL Draft, while defensive back Russ Yeast had surgery on his knee and is out.

Tommy Stevens might be hurt, but really, that’s addition by subtraction at this point. The senior never really got going as the signal-caller for the Bulldogs, and it was only a matter of time before things were turned over to freshman Garrett Shrader. Shrader hasn’t proven himself to be a great passer, but the Bulldogs don’t really ask for a lot of passing from the quarterback anyway, and Shrader is a better runner than Stevens ever was. Even with Shrader sometimes calling his own number, Mississippi State’s offense will still flow through running back Kylin Hill. Hill has 1,347 rushing yards and ten touchdowns on the season, which underscores just how many problems the Bulldog offense has had this season. Mississippi State has only 42 touchdowns on the year, an average of just over three a game.

Usually, that wouldn’t be that bad against an SEC schedule, but LSU and Alabama’s defenses were nowhere near what they’d been in past seasons, and Mississippi State could still manage only 20 points combined against the two of them.

Unlike Mississippi State, Louisville can move the ball. In fact, Louisville is built entirely on its ability to move the ball, mainly through the arm of Micale Cunningham and the legs of Javian Hawkins. Hawkins tends to get the yardage to set up the Cardinals’ scores, as he’s rushed for 1,420 yards and eight touchdowns. His lack of end zone production isn’t the same issue that Mississippi State faces with Hill, because Cunningham has 20 touchdowns on the year despite barely playing in the first two games of the season. Over his final three games, he produced ten touchdowns against just two interceptions, helping Louisville clinch bowl eligibility.

However, there are real questions about whether the Cardinals’ recent production has been because the schedule got a lot easier. Syracuse and N.C. State both crashed badly this season, and the Cardinals found themselves entirely out of sync against Kentucky.

Louisville has been a lousy cover team when it steps outside the ACC, and it’s not all that great when it’s an underdog either. The Cardinals have failed to cover in 13 of their past 17 non-conference games. Additionally, they’re 3-10 in their previous 13 as an underdog. They’ve also really struggled as of late against SEC opponents, failing to cover in any of their past four against the league. Mississippi State has had its problems against teams with a winning record, but that’s also in part because the Bulldogs played in the SEC West, which featured three of the nation’s strongest programs in LSU, Alabama, and Auburn. Outside of the SEC, they’re 10-4 in their past 14 non-conference games.

As far as the point totals go, Mississippi State has been a somewhat reliable choice to put up points in bowl games, as it’s hit the over in four of its past five bowl games when it’s been the favorite. But Louisville has been even more reliable in the opposite direction, as its last five trips to the postseason have all resulted in hitting the under.

The warmer weather of Christmas week will be gone on Monday, as temperatures will drop to 47 degrees for kickoff.

Louisville has been the team with more enthusiasm, but Mississippi State is the more talented team. The Bulldogs have more talent from top to bottom and have played against better teams than Louisville all season long. Plus, the Cardinals are coming off a disastrous game against Kentucky, a team that Mississippi State had no problems with earlier in the year.

As long as Mississippi State keeps the ball moving on the ground, it should have the edge, and Louisville’s defense isn’t exactly known for putting up tough resistance. Give me the Bulldogs here.