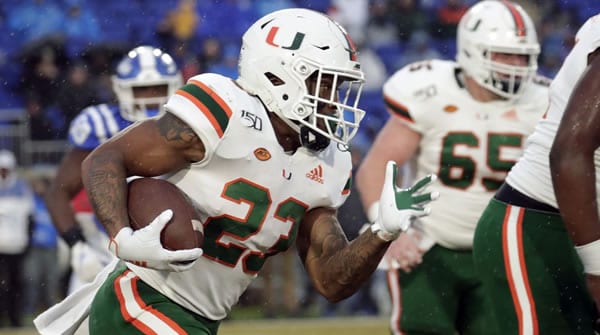 The Hurricanes come into this contest on the heels of a 31-14 win over the UAB Blazers when Miami hosted Alabama-Birmingham last Thursday. The Hurricanes greened up when they closed as a 155-point home favorite. The ATS win snapped a three-game skid for Miami against the number.

The Cardinals come into this game off a 35-21 win attained against the visiting Western Kentucky Hilltoppers. Closing as a 13.5-point favorite, the Cards delivered what would be classed as a seeing-eye cover as a resurgent WKU nearly came through the back-door in the fourth quarter after UL called off the dogs when it held a 21-point lead. Louisville has now covered in their previous two outings.

How the Public is Betting The Miami- Louisville Game

63% of the public are on-board with the Cards here as the slight chalk. As a result, we have seen the line rise by a point since Louisville opened as a 1.5-point favorite at the open of this market.

Louisville and Miami last met in 2019 in Coral Gables, where the Canes laid waste to the Cardinals in a 52-27 victory, covering easy as a 6.5-point favorite. However, Louisville had won the three preceding fixtures that encompass the four-game history between these two parties.

Neither the Hurricanes nor the Cardinals have expressed any emergent injury concerns to crucial personnel heading into their ACC conference opener.

All of the trends will further court Louisville’s action in this market. The Canes are 1-4 ATS in the previous five meetings. Moreover, the Favorite and Home Team have also covered successfully in the preceding four contests. All of the aforementioned make Louisville appear to be a commodity in this spot, but it also renders them potentially overvalued.

Expanding further on the premise of the trends positioning the Cardinals to be overvalued, I must also highlight that when it is all said and done, the Cardinals won’t even give the Hurricanes a full field goal. If anything, this would suggest to me that these betting trends, which serve as a prime criterion for many to back UL, could be undermined in this spot. Had the Hurricanes produced cash or had the Favorite and or Home Team not been so kind to takers as of recent, Miami may actually be the chalk here. This translates to value with the U. I would also like to highlight the hook that presents with backing the Cardinals here with the guise of an easy win should they emerge on top by a field-goal margin. This is another way the market entices action on the favorite, but I am hard-pressed to believe that the guys in the desert will be so kind in a prime-time nationally televised contest. Miami very simply is set up to be a live dog in this affair.

I will go ahead and toss away the points to nullify the vig and play this one outright on the Money Line. This is the more prudent move, and given how close this contest will likely be, there is a significant chance that the Hurricanes will win this one outright to enhance our return. Miami’s defense was ruthless against UAB’s rushing attack, which incidentally is quite strong. The Hurricanes held UAB to 80 yards on the ground while producing 337 yards of rushing offense of their own en route to their 31-14 victory. Very simply, Miami wore out UAB. The Blazers scored first, and then it was all Canes as they outscored them 31-7 down the back-stretch. This is a testament to The U wearing down the Blazers through the solid defensive play coupled with the potent rushing attack. This is a recipe for success, no matter how and when you deploy it. This strategy can also be a huge issue to deal with for a team like Louisville, who loves to go to the air and strike quickly. The long and methodical approach that Miami will employ can also frustrate the Louisville. The more drawn out this game becomes, the better the Canes have at not only winning but perhaps doing so significantly. That’s how I am playing it. Don’t forget to check out my pro football picks as well!