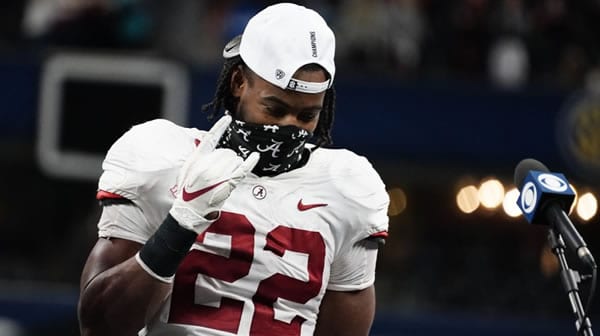 Alabama and Notre Dame meet in Texas on Friday to battle it out in the first of the BCS playoff games on New Years’ Day. Both come in having put up undefeated regular seasons, but it was Alabama who was able to take home their conference crown with a win against Florida, while the Irish fell hard to Clemson in the ACC title game. Notre Dame holds a 5-2 all-time edge in the series, but the only time the teams have played in the past 33 years was in the 2012 National Championship. The Crimson Tide thoroughly dominated the game on their way to a 42-14 victory as running back Eddie Lacy ran all over Manti Te’o and his heavy heart over the passing of his infamous imaginary girlfriend.

Alabama entered the 2020 campaign ranked 1st, and it’s easy to see why they have held onto that spot throughout the season. Their offense ranks in the top five in the NCAA in yards per game, passing, and scoring while the defense is again chock full of next-level talent, many of which are expected to be first and second day picks in the NFL Draft. Cornerback Patrick Surtan II was awarded SEC Defensive Player of the Year, but he is far from alone with fellow d-backs Jose Jobe and Malachi More, linebackers Dylan Moses, Christopher Allen, Will Anderson along with lineman Christian Barmore just some of the stacked Tide roster.

Leading the way for the Alabama offense is senior quarterback Mac Jones, who has rocketed up draft boards with his performance as the season progressed and is now expected to be selected in the first round of the 2021 draft. Jones has thrown for 3739 yards with 32 touchdowns compared to just four interceptions and is currently first in the country in quarterback rating, second in passing yards, and third, in touchdown passes. Jones has been incredibly efficient during his college career with a 47-7 overall TD-INT ratio and looks to be in line to add to that success against an Irish defense that ranks just 56th against the pass and in takeaways.

More Picks: Get all of our college football bowl picks >>>

The Crimson Tide passing attack lost one of the best receivers in the country when Jaylen Waddle suffered a season-ending injury against Georgia, but they have barely missed a beat in their offensive success through the air thanks in large part to the connection between Mac Jones and DeVonta Smith, both of whom are Heisman Trophy finalists. Smith is the nation’s leader in touchdown receptions with 17 to go along with 98 receptions for 1,511 yards. He has had multiple scores in five of his last six games, and over that time span, has 50 catches for 13 touchdowns. Smith and John Metchie are the only active receivers on the team with a touchdown or over 20 receptions on the season, and both will continue to see plenty of attention through the air from Jones against the Irish.

From 1969 to 2011, Alabama didn’t have a single receiver get selected out of college in the first round. However, in the nine years since Julio Jones, Amari Cooper, Calvin Ridley, Jerry Jeudy, and Henry Ruggs all got selected on day one. Both Devonta Smith and Jaylen Waddle are expected to join that list in 2021.

Mac Jones and Devonta Smith may be the ones representing the Crimson Tide on Heisman night, but it is running back Najee Harris, who won the award this season for SEC Offensive Player of the Year. Harris ran for 1,262 yards while scoring an NCAA leading 24 touchdowns on the ground to go along with an additional 32 receptions for 316 yards and three touchdowns through the air. Harris ran for a score in all but one game this season and certainly saved his best for last when he was able to find the endzone five times against Florida in the SEC Championship. It will be an interesting matchup to watch in the trenches between Harris and a Notre Dame rush defense led by star linebacker Jeremiah Owusu-Koramoah.

In a case of Déjà vu all over again, Notre Dame fans watched as their team fell apart versus top talent when they got blown out 34-10 against Clemson in the ACC Championship game. In the Irish previous six postseason matchups that were either New Year’s Six or BCS playoff games, they had gone 0-6 both straight up and against the spread, with every loss by at least 14 points and an average of 24 points per game.

Like Alabama’s Mac Jones, Notre Dame quarterback Ian Book has found impressive success with efficiency, passing for 15 touchdowns compared to just two interceptions. But unlike Jones, Book’s game has a ceiling limit that he will likely reach upon graduation as the Irish signal-caller does not at all have the same expectation of success at the NFL level. Book has certainly earned his accolades in the NCAA, most notably highlighted by already having solidified himself as Notre Dame’s passing touchdown leader in team history and has a definite ability to make plays with his feet, as evident by his eight rushing touchdowns on the season. But he has yet to find that success against top opponents during his time with the Irish as of his 16 career scores on the ground, none have come against ranked teams.

The best player and future of the Irish offense is running back Kyren Williams. This year’s winner of the ACC Offensive Rookie of the Year award, Williams ran for over 1,000 yards on the season while averaging 5.4 yards per carry, rushing for 12 touchdowns, and finishing third on the team in receptions with 27. Unfortunately, Williams now faces easily his toughest test of the season, going up against an Alabama defense that has allowed a running back over 100 yards in just one game all season, hasn’t allowed a team over 100 rushing yards in their past three games, and is letting up an average of only 2.6 yards per carry over their last eight.

With Kyren Williams and the Notre Dame rushing attack facing a stiff test up front, they will likely need to rely more heavily on Ian Book, and the passing game and Irish offensive coordinator Tommy Rees will need to find a way to move the ball downfield if his team wants to have any sort of a chance of staying on pace with the Crimson Tide for 60 minutes. Senior wide receiver Javon McKinley emerged as the Book’s top option through the air, leading the team in receptions and yards. Both McKinley and fellow wideout Ben Skowronek have been especially effective of late, with McKinley posting over 100 yards receiving in three of his last five games and Skowronek scoring a touchdown or getting over 50 yards receiving in four straight games. Both are seniors and, along with Book, will be gone after this season, but thankfully for the Irish, not all hope is lost in the passing game as freshman tight end Michael Mayer continues to show flashes of ability that could make him a future star on both Saturdays and Sundays down the road.

The money line for this game (-1300) is more than double the next highest bowl matchup, and it’s easy to see why. Notre Dame has won just two of their last twenty games against top 6 teams and is only 3-15 in their previous 18 games played away from South Bend versus top 20 teams, and now has to face off against an Alabama team with two Heisman finalists along with the SEC Offensive and Defensive Players of the Year. I believe the Fighting Irish well-established track record of terribleness in big games will continue on New Year’s Day, and with a clear talent imbalance both on the field and on the sidelines with head coaches Nick Saban against Brian Kelly, I expect the Crimson Tide to get a resounding win and cover in the first BCS step on their way to another National Championship.

Mike’s Pick to Cover the Point Spread: Alabama -20. Kick your New Year off right by making the switch to reduced odds -105 (instead of -110). Find this beautiful opportunity at BetAnySports!