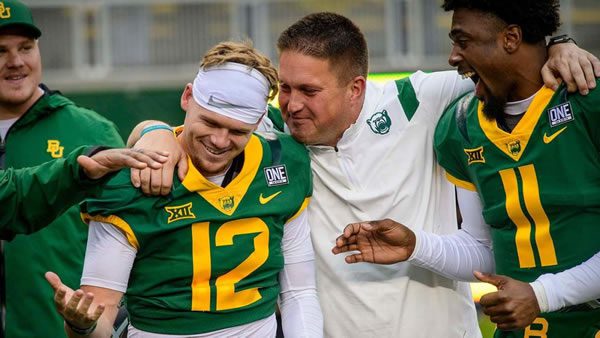 If you like points, you’ve liked watching these two teams play this season. But you probably won’t like watching them play each other if that’s the case because Oklahoma State and Baylor know how to slow each other down pretty well. These teams faced off twice a year ago, and in both cases, 24 points were enough to get the victory. Granted, that’s because Oklahoma State coughed the ball up a combined seven times in two meetings with the Bears, but in either case, both sides were able to do enough to keep the score down.

Strangely, that’s the only time that Baylor has successfully shut down Oklahoma State’s offense well enough to win the game without putting up a boatload of points itself. In every other game where Baylor has beaten Oklahoma State as a member of the Big 12 (Oklahoma State is 19-7 against Baylor in Big 12 regular season games), the Bears have never failed to score at least 35 points. Even that was a one-time thing, as six of Baylor’s seven wins in this series in regular season play came with the Bears putting up at least 40 points.

Baylor’s talented enough to score 40 on most teams, but Oklahoma State might be a tough team to pull that off against. The Cowboys have played strong defense in Big 12 games and held their past two opponents to a combined 24 points. If they can hold Baylor’s score down again, they’re going to be in a prime position to get to 4-0.

How the Public is Betting the Oklahoma State/Baylor Game

The public is divided evenly on this one, as 52% of tickets have come in on Oklahoma State. However, the line has ticked up from -1.5 to -2.5 for the Bears, showing that the money is coming in on Baylor. The total has increased from 55 to 56.5.

Spencer Sanders has to be thinking about what happened the last time he faced Baylor because that game was the moment that cost Oklahoma State any shot at a national championship. The Cowboys would have had a tough case to make against an undefeated Cincinnati had they won that game against Baylor, but at least they would have had a case with a Big 12 title. But four interceptions meant that Oklahoma State couldn’t get the job done when it mattered most, and the Cowboys were left on the outside looking in at a playoff appearance.
Sanders has settled down with the football this year and has thrown ten touchdowns against just one interception this season, which has been a large reason that Oklahoma State has ripped through the opposition. The Cowboys have barely been tested through three games, with the win over Central Michigan looking a lot closer than it actually became.
And that’s critical because the way that you beat Baylor is by throwing the football. The Bears kept Iowa State from doing anything on the ground last week, and Baylor’s run defense ranks in the top 10 nationally through four games. With just 79.5 yards per carry given up, Baylor isn’t going to give up much on the ground, which means Sanders and Braydon Johnson are going to have to do most of the work. Oklahoma State has moved the ball on Baylor in previous years, but the Cowboys have to do so without giving away short fields via turnovers this time around.

Baylor has been far more balanced than Oklahoma State, relying on a good run game as well as a solid passing attack. The Bears have opted to run more often than pass, but they do both things well, throwing for 773 yards with Blake Shapen and getting some good yardage (315 yards to date) out of running back Richard Reese.
That said, nobody really stands out among the Baylor pass catchers as someone that the Cowboys absolutely have to stop. Shapen tends to spread things out all over the field, as five different Baylor receivers and tight ends have hauled in at least seven passes on the season. Ben Sims is about the only truly reliable option that Shapen feels he has, and as a tight end, he’s not likely to go deep very often.
The question is, what will work on Oklahoma State? Against Central Michigan, the Chippewas rolled up 44 points on the Cowboys because the defense wasn’t all that worried about stopping the pass with a huge lead. The Cowboys have been stronger against the run than the pass, but they’ve also not faced a really good and really balanced offense before this game.

This is a defensive battle for a reason: the under has cashed in six of seven matchups between the teams in Waco. These teams are normally high-powered attacking teams against other opponents, but against this opponent, the numbers say the defenses have this job down pat. Oklahoma State has been a great bet no matter what kind of game it is; the Cowboys have covered in 12 of their last 16 games overall and are 15-5-1 ATS in their past 21 trips away from Stillwater.
The Bears have also dominated at home, covering in eight on nine games at McLane Stadium. Baylor really shines when facing a team that is expected to win; the Bears are 45-22 ATS in their past 67 games against a team with a winning record.

It’s going to be very warm in Waco, with temperatures reaching 89 degrees before kickoff and a few clouds. Wind will blow north-northeast at six miles per hour.

I have to lean toward the Cowboys in this one, simply because they pass enough to beat a team like Baylor. You either need a great ground attack, or you need to be unafraid of attacking the Bears’ pass to win, and the Cowboys seem to be siding with the latter.
As long as Spencer Sanders doesn’t turn the ball over, this should be a straightforward showing for Oklahoma State. Give me the Cowboys.