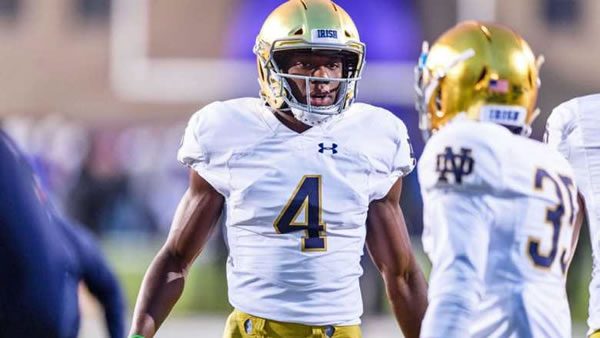 Point Spread: OK ST +2 / ND -2 (BetOnline - One of the biggest and best sportsbooks on the web! They process bitcoin deposits the fastest and also bitcoin payouts the fastest! That matters!)

Notre Dame and Oklahoma State will meet at State Farm Stadium in Glendale, Arizona, for a New Year’s Day battle in the Fiesta Bowl. This game is the first-ever football meeting between the schools and will be one of four bowl matchups of two teams ranked in the top ten.

The biggest news for Notre Dame going into the bowl season was the sudden and unexpected departure of head coach Brian Kelly, who is off to Baton Rouge with his pathetic attempt at a southern accent to take over at LSU. The Irish are in the midst of a five-year streak of double-digit wins under Kelly, but at the same time had little chance in big games under his fragile ego and never reached the college football pinnacle expected of an elite program(1-7 against top 6 teams, 2-12 versus the top 10). They could certainly be good under Kelly, but greatness was never in reach thanks to his frequent disappearing acts when faced with toughness across the sidelines.

To the delight of players, recruits and fans alike, Notre Dame quickly elevated defensive coordinator Marcus Freeman to the head coaching role to replace the angry imp Kelly. Oddly enough, Freeman’s counterpart across the field in Mike Gundy also got his job when a previous coach left for LSU (Gundy replaced Les Miles). Freeman brings a renewed energy to the Irish program, and even with zero head coaching experience, fans at least can have some faith in their team winning a meaningful bowl game and hopefully ending a streak that has seen Notre Dame lose seven straight BCS/New Year’s Six bowl games, four of which were under Kelly.

The Irish backfield will be shorthanded going into the Fiesta Bowl with Kyren Williams having declared for the NFL Draft and deciding to opt-out of playing. Thankfully offensive coordinator Tommy Rees didn’t Kelly to LSU and stayed with the team, as he will have his work cut out for him trying to strategize a game plan without one of their best players against a dominant Oklahoma State defense that leads the entire NCAA in tackles for loss and sacks and is ranked in the top ten in scoring, passing, rushing and total yards allowed per game. Cowboys’ true freshman lineman Collin Oliver is a force to be reckoned with double-digit sacks in his initial season and is joined in the front seven by Brock Martin, Malcolm Rodriguez, and Devin Harper. Rees and Notre Dame will likely turn to Chris Tyree as their lead running back, with Logan Diggs and Audric Estime spelling him throughout the game.

With the running game depleted, the Irish will need to rely more heavily on quarterback Jack Coan to lead the offense. He has been consistently accurate all season, throwing 20 touchdowns compared to just six interceptions and completing over 67% of his passes overall, including a run of over 70% in six of his last seven games. Unfortunately, he was at his worst against ranked competition, throwing for less than 160 yards in each game versus Cincinnati and Wisconsin and tossing only one touchdown total to go along with an interception as well. Notre Dame has had an incredible run of success of late when putting points on the board, winning 52 straight games when scoring over 20 points, and will need Coan to be at his best in a challenging spot against a stout Cowboys defense if they want to see that streak continue.

Coan’s top options through the air are undoubtedly tight end Michael Mayer and wide receiver Kevin Austin. The junior Austin leads the team in touchdowns (6) and yards (783), while Mayer tops out at receptions with 42. Mayer has clear NFL potential and will likely go pro when allowed by NCAA rules after next season, and it looks like the team will be getting one more year out of Austin as he doesn’t appear that he will be declaring early like his teammates Kyren Williams and star safety Kyle Hamilton. The loss of Hamilton is at least lessened by the fact he hasn’t played since October, and the defense has had plenty of time to get acclimated to game planning without him in the lineup.

Leading the way for the Oklahoma State offense is quarterback Spencer Sanders. The junior signal-caller has thrown for 2468 yards and 16 touchdowns compared to 12 interceptions while also rushing for 543 yards and six scores. . Unlike the quarterback across the field in Coan, Sanders hasn’t been overly accurate this season (hasn’t completed over 68% of his passes in any game), which is certainly something he will undoubtedly need to be aware of considering Notre Dame ranks 20th in turnover margin.

The biggest question facing the Oklahoma State offense is the health of lead running back Jaylen Warren, who ran for over 11 yards on the season to go along with 11 rushing touchdowns. Warren missed the Big 12 Championship game against Baylor due to ankle and shoulder injury, and his absence was felt dearly, with the Cowboys putting up just 70 yards rushing on 40 carries in their 21-16 loss to the Bears. Warren is currently expected to be available, but in case he isn’t or reaggravates one of his injuries, he would be replaced by the tandem of Dezmon Jackson and Dominic Richardson. Neither back was especially impressive during the season, so Oklahoma State will be certainly counting on Warren to step up in their season finale, though whoever is handed the ball will have their work cut for them against a Notre Dame front seven led by lineman Isaiah Foskey.

Much like the Irish offense, the Cowboys have two prior target options through the air, which in their case are wide receivers Tay Martin and Brennan Presley. They combine to account for 75% of the teams’ touchdown receptions, though Martin is the clear favorite, leading the team in receptions (70), yards (942), and scores (7). The Irish defense has adjusted well since losing Kyle Hamilton to injury, they have allowed just two touchdowns over their past four games and will undoubtedly be focused on slowing down Martin, especially if they want to see that run of scoring success continue.

Notre Dame has gained a reputation in recent years for failing to step up against elite competition, going 2-19 in their last 21 against the top 6, 6-29 against the top 12, and 4-16 versus the top 20. They are also in the midst of an eleven-game losing streak in January games. They now have to go up against an Oklahoma State team that Mike Gundy has led to five straight covers in bowl games and has a strong enough defense to keep Notre Dame from keeping with their run of success when lighting up the scoreboard. Despite all of that, I am backing the Irish on New Years’ Day to get the win and cover. Brian Kelly and his culture of failure when it counts is gone, and I believe Marcus Freeman will take the reins running and start his South Bend tenure off with a win and cover in a low-scoring game against Oklahoma State in the Fiesta Bowl.

Mike’s Pick to Cover the Point Spread: Notre Dame -2 and Under 45.5. Be sure to check out our Week 16 NFL predictions!