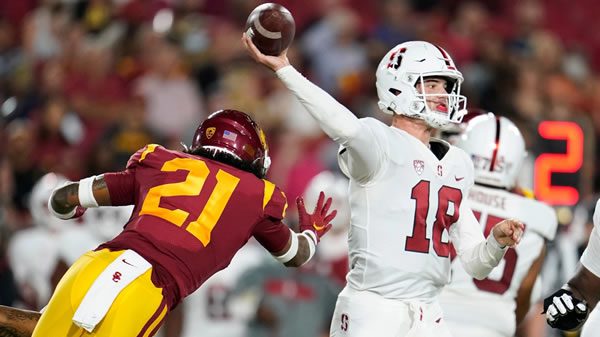 Point Spread: ORST -7/STAN +7 (You can make the Cardinal a +20 underdog by inserting them into a massive 20 point CFB teaser at Wagerweb Sportsbook!)

After two straight losses, Oregon State needs to get back on track in a hurry. The Beavers had the bad luck to draw both USC and Utah out of what used to be the Pac-12 South and not only that, but they drew the Trojans and the Utes in consecutive games. Only the fact that Oregon is their end-of-the-year rival saved the Beavers from potentially having to open with the three strongest teams in the Pac-12 and end any chance at the league championship before it began. That said, the Beavers nearly beat USC and were competitive with Utah for a half before fading down the stretch.
Stanford hasn’t come close to competing, as the Cardinal got their doors blown off in the first half in all three Pac-12 games they’ve played. Only Washington allowed Stanford to stay even remotely close, and the Huskies quickly buried the Cardinal in the third quarter of that game, meaning Stanford hasn’t had a chance to win any of their league games in the final 15 minutes. The Cardinal are a long way from the days of Andrew Luck, and if they don’t get a victory on the board soon, they’ll be out of the running for a bowl game pretty quickly.

How the Public is Betting the Oregon State/Stanford Game

The public believes in Oregon State, but the sharps think this line is a bit too high. 64% of tickets came in on the Beavers, but the spread has ticked down to Stanford +7 from +7.5. The total has fallen from 58 to 56.5.

Stanford:
Running back E.J. Smith (undisclosed) is out.

When Oregon State Has the Ball

Before backing the Beavers in this matchup, make sure that Chance Nolan is actually going to play. Oregon State actually lasted 2 1/2 quarters with third-stringer Ben Gulbranson in the game despite four turnovers in the contest, but Utah’s experience on both sides of the ball eventually won out and allowed them to pull away from the Beavers. Oregon State just never got into a flow against the Utes because of injury, so if Nolan doesn’t play, you might want to avoid this bet.
If he does play, he should be effective with Tre’Shaun Harrison and Anthony Gould catching passes. The two receivers combined for 175 yards against Utah despite playing three quarters with a reserve from deep off the bench calling signals. Even if Nolan can’t go, at least Oregon State will have had a full week of practice with Gulbranson getting reps to prepare for that possibility. Still, this might be one to watch and wait to live bet: if Nolan plays and is ineffective, or if Gulbranson is taking snaps and looks better than he did in Salt Lake City, you can get a much better line on this game.

Stanford also knows a thing or two about turning the ball over, as the Cardinal are minus-7 on the turnovers in Pac-12 play. Against USC, the score was deceptive because the Cardinal moved the ball on the Trojans’ backups after coughing the ball up four times in the first three quarters. Stanford made the score look cosmetic at 41-28, but really, it was never in either that game or the loss to Oregon.
The problem is that Tanner McKee hasn’t been effective against first-team defenses in tight games. In Pac-12 games, Stanford has been outscored 83-24 in the first half because the defense shuts the Cardinal down and the opposing offense does pretty much whatever it wants. Stanford has a couple of weapons, namely wide receiver Michael Wilson, but the Cardinal can’t really get them going until it’s too late to matter. Stanford has been great for backdoor overs, but as far as staying competitive, it hasn’t worked at all.

When the Pac-12 changes around the schedule, Oregon State sure isn’t going to miss having to go to Stanford every two years. The Beavers are just 1-5 ATS in their past six trips to Stanford, and prior to last year’s win in Corvallis, Oregon State had lost 11 straight against the Cardinal. The home team has covered in four of five meetings, and Oregon State is a mere 1-5 ATS away from Corvallis over its past six road games.
That said, betting on Stanford to cover as of late has been a fool’s errand. Since the pandemic happened, Stanford has not been the same by any stretch of the imagination. The Cardinal are 1-10 ATS in their last 11 home games and have just six covers in their past 26 games overall. The Over also continues to be the play, as Stanford has hit the over in four straight Pac-12 games.

Here’s the problem with Pac-12 after dark: it also means Pac-12 in less-than-ideal weather. Temperatures are set to plunge to 48 degrees by the time this game gets going, so this isn’t exactly going to be typical October weather. At least wind won’t be an issue; it’s expected to be just one mile per hour going west.

It’s hard to pick Oregon State to do much of anything in a place where it has had no success, but the Beavers have looked like the better team and have to get back in the win column here. Before making a bet on Oregon State, take the time to make sure that Nolan is actually going to play, which should be known early in the day on Saturday. If he will play, back the Beavers. If not, take Stanford and the points. Bet your Week 6 cfb picks for FREE by taking advantage of a 100% real cash bonus up to $500 when you enter bonus promo code PREDICTEM at Betnow Sportsbook!