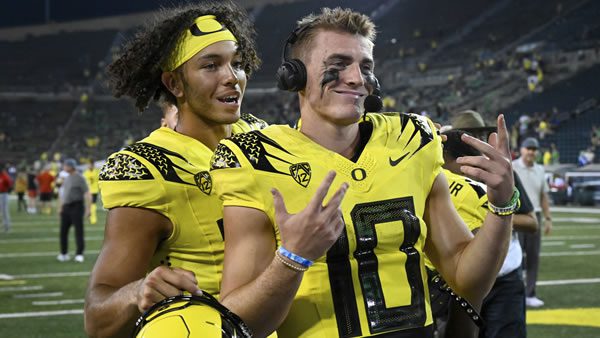 Point Spread: ORE -31.5/COL +31.5 (Bovada – Like to bet props? This bookie has the most anywhere! Simply click on a game and it’ll open all the wagering opportunities!)

The Oregon Ducks come into Boulder on Saturday for a Pac-12 faceoff with the Colorado Buffaloes. The Ducks did their part again last week, getting the 42-24 road win over Cal. It was their 7th win in a row and the 6th time in their last seven games that they’ve covered the spread. It’s been quite the opposite scenario for the Buffaloes, both overall and in a betting sense. On Saturday, they lost to ASU, 42-34, falling to 1-7 and now having to take on the top team in the conference. Can they keep this one in the ballpark, or will the Ducks continue to romp?

Finding Elusive Optimism on the Buffs

The season has been a disaster, but perhaps a small surge in the wake of a midseason coaching firing and a total bottoming out is being witnessed. It’s all relative, and the Buffaloes are simply a bad Pac-12 team. But when dealing with some big spreads, a slight variation in the matrix can lead to an edge. Two of their three covers this season have occurred in the last three weeks, including last week’s one-score loss to Arizona State. Two weeks before that, they scored their only win of the season, an OT win over Cal. In contrast to their first five games of the year, where nothing came close to going right, it’s not really a half-bad stretch for this beleaguered Buffaloes bunch.

Again, at home, they face a Ducks team that is again on the road. And while Oregon won and covered the spread against Cal last week, we saw some early-game apathy that we could see again on the road this week. Oregon has dug deep to reverse their week one disaster to Georgia, now atop the conference at 7-1 with some big spots looming ahead. Not that they phone it in against lesser conference opposition, but they’re also not always shot from a cannon in these seemingly-undemanding conference affairs. The Ducks have the Huskies and Utes coming up in the next two weeks. What happens if they get a nice lead in this game? Are they going to put the pedal to the metal, or could they let up?

Matchup Issues for the Buffaloes

Even if the Ducks aren’t approaching this with four quarters of utmost urgency, it’s not hard to see Oregon quarterback Bo Nix and his cast taking it to this Colorado “D” in a big way. It’s not late enough in the season for Colorado to depend on snow to aid what is really a hapless secondary that could be duck soup for a vital Oregon aerial attack. With Nix connecting with his receivers at a near 73% clip, with talent like Chase Cota, Troy Franklin, and Kris Hudson, there will be few answers from this Buffaloes secondary.

It gets even worse when looking at the run. Colorado can’t stop the run to save their lives. How is that going to look? Not only will they be catching hell from Mar’Keise Irving and Noah Whittington, along with Nix spring loose runs, but even if Oregon lets up and starts killing clock, it still seems bad for Colorado. Any of these hungry reserve Ducks’ backs looking to make an impression could easily go off in more of a garbage-time scenario. That really puts a hurt on Colorado’s prospects for late-game apathy leading to a backdoor cover. If entertaining Colorado in this spot, it’s an angle that would figure into it, but I wouldn’t be so sure about this one.

Without actually doing the tiresome research, I’m forced to ask when is the last time either Bo Nix or this Oregon team covered a 30+ point spread in-conference on the road? I’d imagine the findings would indicate that it’s far from a slam dunk. Colorado stinks. There’s no sugar-coating that. Nor can one pretend there aren’t defensive matchup concerns that suggest that even a three-quarter Oregon offense can’t do enough to leave the Buffaloes in a heap. But has the recent surge on offense shown that Colorado can maybe hit the scoreboard a few times in this spot? Has the Ducks’ winning streak may be masked some inadequacies on the other side of the ball that the Buffaloes can exploit? We see even lesser conference teams getting into the twenties in scoring against this “D.” Anything similar this week would make covering quite a task.

It’s hard to justify a pick on Colorado on the basis of anything football or matchup related. They don’t really do anything well on either side of the ball. Their offense is oftentimes stuck in the mud, while on the other side of the ball, the optimism is even harder to find. But when looking at grandiose point spreads like this, there simply aren’t going to be many matchup components in favor of the underdog. That’s the nature of being a jumbo-sized dog. What I see that inspires some ATS promise for the Buffaloes is their level of effort, their fighting spirit, how the coaching staff is working on different things to make it work, and how there is rising hunger on that sideline. I’m hoping that’s maybe enough in a game where the Ducks can’t help but be a little low on urgency and maybe a tiny bit flat in their second straight road game. I’ll take a whirl on the Buffaloes and the points on Saturday.

Loot’s Pick to Cover the Point Spread: I’m betting on the Colorado Buffaloes plus 31.5 points. Bet the Buffs as +51.5 underdogs by inserting them into a massive 20 point college football teaser found at Wagerweb Sportsbook!