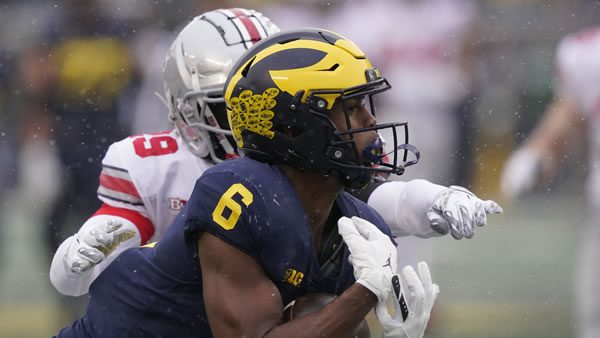 Point Spread: PSU +6.5/MICH -6.5 (STOP betting on games at -110 odds! Start risking only -105 starting TODAY at BetAnySports Sportsbook! You’ll be so glad you made the switch!)

Which side wins this battle of defensive-oriented teams that really haven’t been playing all that well lately? Penn State looked like it made a big statement in going down to the plains and thrashing Auburn, but the Nittany Lions followed that up with two languid efforts against Central Michigan and Northwestern. Penn State was never threatened by either team, but the execution clearly wasn’t up to the level needed for the Nittany Lions to compete against the likes of a Michigan or an Ohio State.
The learning curve gets a lot sharper in a hurry, as Michigan represents the biggest challenge Penn State has seen all season. But the Wolverines really aren’t playing all that well either, as they struggled with Indiana for a half before they eventually decided enough was enough and put the Hoosiers away. Michigan has smashed its opponents when it wants to be at its best, but for too long, the Wolverines have done just enough to get by. The Wolverines have the defense needed to defend their Big Ten championship, but they’ve got to get the offense going if they’re going to prove that they’re still a genuine contender for the league title.

How the Public is Betting the Penn State/Michigan Game

The public is leaning toward Michigan in this matchup, as 58 percent of all tickets have come in on the Wolverines. The total hasn’t yet changed, and the spread has stayed firm.

Most people know what Michigan is capable of doing on the ground, but Penn State has its own weapons on the ground and regularly puts up solid numbers with its offensive unit. Nicholas Singleton has made Penn State opponents sit up and take notice in his freshman season, as he’s averaged 7.3 yards per carry through five games this season. However, Penn State hasn’t really gotten Singleton into a flow since the Auburn game, and the lack of results have spoken loud and clear.

Against Northwestern, Penn State committed to the run from start to finish, gaining 220 yards and running the ball 58 times. But they could have done a fair amount more with better run blocking, which begs the question of whether the run game can actually stand up to Michigan’s front seven. The Nittany Lions didn’t break a run of longer than 19 yards against Northwestern, which worked as far as bleeding out the clock but won’t work when Penn State needs to put up points and keep pace with Michigan. Keeping the ball on the ground might work to keep Michigan on the sidelines, but eventually, Sean Clifford will have to throw the ball in order to get the Nittany Lions enough points to win this game, given how strong the Wolverines’ run defense has shown this season.

Pretty much everything stated about Penn State can really apply to Michigan. The Wolverines are also a defense-oriented team that has shut down everyone they’ve played, but they’re facing a pass defense that really hasn’t been tested much this season. Penn State’s biggest weakness is that its pass defense is susceptible to the big play, which almost cost the Nittany Lions in the win over Purdue.
The question is, can Michigan successfully exploit this? Like Penn State, Michigan is built around the ground game, as Blake Corum has run for 735 yards and 11 touchdowns on the season. J.J. McCarthy has moved the ball well this season, completing more than 75 percent of his passes, but he also hasn’t been asked to do the job against a really good defense to this point in the season. Against Iowa, McCarthy didn’t really take chances, instead throwing when Iowa gave him something and letting Corum keep the Hawkeye defense on the field.
Penn State’s defense is likely to focus on Corum and make McCarthy beat it, which places the pressure squarely on the young quarterback’s shoulders. If he’s able to handle it, Michigan will be just fine, but if he crumbles, the Nittany Lions will have the edge.

The easiest play to make in this matchup has been to simply take the favorite, as the favorite has covered in seven of the past eight meetings between the teams. The Over has also been a great play in this situation, as it’s cashed in five of the past seven meetings between these two teams. However, the past four matchups have all been 49 points or less, making the projection of 52.5 points seem like an outlier.

Penn State’s been a great road play over the past two years, going 7-3 in their past ten games away from Happy Valley. On the other side, Michigan has covered in nine of its past 12 Big Ten games.

These are both defense-heavy teams, and I don’t think Michigan’s going to be able to attack Penn State well enough to turn this game into a blowout. The Wolverines are instead likely to keep the ball on the ground and let Corum try to keep grinding out yards and first downs on their way to draining the clock.

I like the under here, and I think Penn State and the points makes sense as the spread play. Bet your Week 6 NFL predictions for FREE by scoring a 100% real cash bonus up to $500 when you enter bonus code PREDICTEM on the Special Offers page after making your first deposit at the web’s oldest and most trusted bookie —> Everygame Sportsbook!