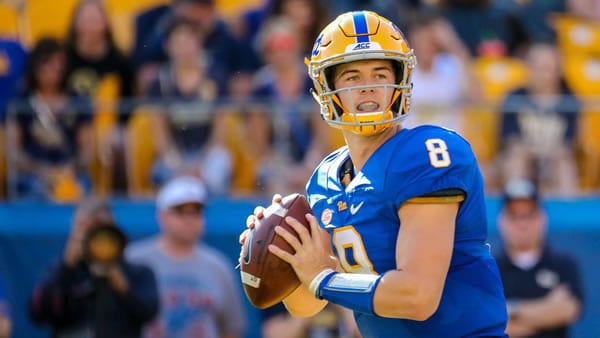 Point Spread: PITT -7/GT +7 (Bovada - Best live betting on the planet! 50% sign-up bonus! Rebates on ALL your bets; win, lose or draw! FAST hassle-free payouts! What more could you ask for?)

Life on the road has been rather tough on Pittsburgh this season. The Panthers have been quite strong in the state of Pennsylvania this year, earning a 4-2 record in home games, with the only losses being by a point to N.C. State and a rout against undefeated Notre Dame. But when Pittsburgh goes on the road, things have tended to get ugly. Other than a win over Florida State, which has been about as bad as it gets this season, the Panthers have had no success on the road this year.

That’s a problem against an improving Georgia Tech squad that’s actually been better at home than its record suggests. The Yellow Jackets are just 2-3 at Bobby Dodd Stadium this season, but they’ve played one of the most nightmarish home schedules ever, as their home slate included Notre Dame, a full-strength Clemson, and Central Florida. When they’ve played a team that isn’t ranked (read: Louisville and Duke), they’ve pulled out some rather comfortable wins. A 4-5 record in the ACC would be a massive accomplishment for Geoff Collins’ team; can they pull it off in their final home game of the season?

How the Public is Betting the Pittsburgh/Georgia Tech Game

The public is going with Pittsburgh, and so is the money. Sixty-eight percent of tickets have come in on the Panthers, and the line has ticked up a half-point from -6.5 to -7 for the Panthers. The total has risen two points, jumping from 51.5 to 53.5.

Pittsburgh:
Running back Israel Abanikanda (illness) is questionable. Defensive back Paris Ford (personal) is out indefinitely, and tight end Lucas Krull (lower body) is out for the season.

When Kenny Pickett is at his best, Pittsburgh’s offense can move the ball on just about anybody. The Panthers have been somewhat inconsistent in part because they’ve played a brutal schedule and in part, because Pickett’s health hasn’t been the greatest. He’s been healthy in November, and the Panthers put up a pair of 40-point games against Florida State and Virginia Tech before running into the juggernaut that is Clemson.

Pitt’s real problem is that it has an incredibly weak ground game. The Panthers get little help from leading rusher Vincent Davis, who has just 385 yards on the season and has needed 118 carries to get to that meager total. When your running back is averaging 3.3 yards a carry, that’s not good if you’re an NFL team. If you’re a college team, those numbers are downright anemic. That’s put a lot of pressure on the Pitt passing game, and it’s meant a lot of yards without a lot of touchdowns for the Panthers. It’s only been recently that Pittsburgh has started to find open space for Jordan Addison and DJ Turner to attack secondaries. When they’ve done so, the results have been much to Pitt’s liking.

For all of Georgia Tech’s efforts to transition away from the Paul Johnson triple option days, this is still a run-first football team. The Yellow Jackets average over 200 yards a game on the ground, and they were able to pull away from and pound Duke because of their ground game. Quarterback Jeff Sims isn’t strictly a running quarterback, but with 11 touchdowns and 11 interceptions to his name, the Yellow Jackets are a little more comfortable with him trying to win the game with his feet as opposed to his arm.

However, that might be difficult to do in this game because Pittsburgh’s biggest strength is its rush defense. Even though Clemson crushed Pittsburgh as expected, Travis Etienne wasn’t the one who did the damage. Etienne only managed 58 yards on the ground, as the Tigers opted to pick the Panthers’ weak secondary apart. It’s been the same story all year for the Panthers: if you can pass, you can pretty much do whatever you want against the Pitt defense. If you can’t, you’re in for a rough afternoon. Pitt hasn’t allowed a 100-yard rusher all season, so unless Georgia Tech plans to do something that hasn’t happened all year, the Yellow Jackets will have to get a big game out of Jalen Camp or Malachi Carter against the Pitt secondary.

Since Pittsburgh joined the ACC, these teams have tended to play tight games. Pittsburgh has won four of the past five meetings, but last year’s 10-point win marked the first time the Panthers had beaten the Yellow Jackets by more than five points as ACC members. (The Panthers did post a 42-14 win over Georgia Tech in 1976, but seeing as how both head coaches were in elementary school when that game took place, there’s no useful information there.)

The past two matchups have been particularly low-scoring, as both games saw less than 45 points scored. However, low-scoring doesn’t really fit with what these teams have been doing lately. The over is 7-0 in the Panthers’ past seven contests, while it’s hit in six of Georgia Tech’s last seven games as a home underdog. History on the spread favors Pittsburgh, as the road team has covered in five of the past seven matchups (read: all of the ACC matchups) in this series.

Life in Atlanta has its advantages, and one of them is late fall temperatures. This should be a great night for football, with temperatures at 42 degrees on a clear night with the wind blowing east-southeast at five miles per hour.

Georgia Tech is getting better, but the Yellow Jackets are facing the wrong kind of team for what they do well here. Pittsburgh is dominant against run-heavy teams and virtually helpless against teams that love to throw the ball. Georgia Tech still doesn’t have the personnel to run a strong passing attack as Geoff Collins tries to cycle through the players who were recruited to play option football and get his own recruits to Atlanta.

The Yellow Jackets aren’t far along enough in that process yet, which means Pittsburgh is likely to be in control of this one. Give me the Panthers here. Bet Pitt as a +13 underdog by inserting the into a massive 20 point football teaser found at BetAnySports Sportsbook! Even better, they offer -105 odds on ALL football/basketball wagers and reduced odds on all money line sports! There is no better perk than the ability to bet at reduced juice! Click here to start betting smarter today!