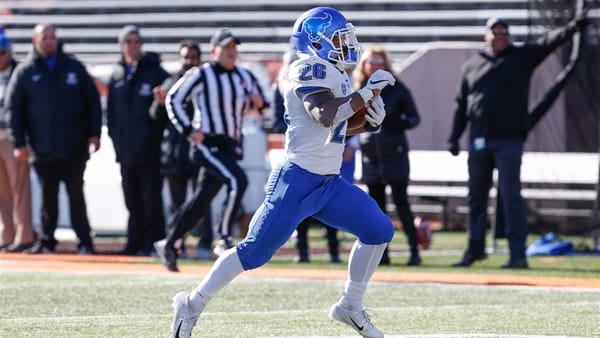 This game between the past two MAC Eastern Division champions takes on much greater importance in a six-game season. Buffalo ended up missing out on the division crown by one game last year, as it finished a game behind Miami-Ohio, then had to watch as the RedHawks blitzed Central Michigan — a team the Bulls had already beaten by 23 points — to claim the MAC title. Buffalo appears to be a much stronger team than the one Miami beat a year ago, and a win here would give the Bulls the inside track on the divisional crown.

For the RedHawks, they’re out to prove that last year wasn’t a fluke. Miami-Ohio has most of its pieces back from a year ago after their surprising championship, but there’s reason to worry hereafter the RedHawks once again couldn’t stop Ball State’s offense in their season opener. Miami was a defensive-oriented team last season, and giving up 31 points to Ball State wasn’t exactly the way that they wanted to get this year started. On the other hand, last year’s team wouldn’t have had enough offense to keep up with the Cardinals. Can the RedHawks’ offense stay with Buffalo if the defense isn’t getting the job done?

How the Public is Betting the Miami-Ohio/Buffalo Game

The public has jumped hard on the Bulls, with 81 percent of tickets in on Buffalo. That’s pushed Buffalo to -11 from -9 at the opening. The total hasn’t changed.

Miami-Ohio:
Quarterback Brett Gabbert is questionable with a head injury. Tight end Andrew Homer and running back Tyre Shelton are both out for the season with undisclosed issues while running back Jaylon Bester is out indefinitely with a heel injury. Defensive back T.J. Rush and tight end James Bomba are both suspended.

A SPORTSBOOK WHERE YOUR CREDIT CARD WILL WORK FOR DEPOSITS: BOVADA!

The good news for Miami is that if Brett Gabbert is unable to go, they won’t be flying blind with an inexperienced quarterback. A.J. Mayer came in off the bench with Gabbert injured and was just fine against Ball State, throwing for 212 yards and three scores against the Cardinals. But with Tyre Shelton out for the season, Miami doesn’t really have much of a running game to speak of at this point. Davion Johnson did fine against Ball State, but the RedHawks didn’t commit to the run, only giving him 11 touches in the contest. It seems that Miami is going with a committee at this point and seeing if anyone can win the job, which might not be an ideal situation against a more experienced team like Buffalo.

In the passing game, it doesn’t matter if Gabbert or Mayer is quarterback; the RedHawks will try to get the ball to Jack Sorenson as often as possible. Sorenson is the main threat when it comes to stretching the defense, as he caught seven passes for 139 yards against Ball State. However, when Miami gets into the red zone, it tends to prefer a different pass-catcher named Jack: tight end Jack Coldiron, who caught two touchdowns in the win.

A year ago, this was the game that saw Kyle Vantrease become the Buffalo starter after ineffective play from Matt Myers forced the Bulls to make a switch. Buffalo is far from a passing team, but the offense proved so inept with Myers at the helm (four turnovers last season against Miami) that the Bulls opted for Vantrease and never looked back. Vantrease offered solid play against Northern Illinois, but make no mistake, he’s option B in this offense.

Buffalo much prefers to let Jaret Patterson get the job done on the ground, and last year against the Redhawks, that would have proved to be a winning strategy if the Bulls hadn’t blown the game with four turnovers. Buffalo actually outgained Miami 398-265 last season, but the turnovers allowed Miami to build such a lead that the Bulls’ inability to cash in their possessions cost them dearly. If Patterson and Kevin Marks are able to control the game by getting their noses in front, Buffalo will have a considerable edge.

When the Bulls do throw, Antonio Nunn is their version of Sorenson. Last year, he was a non-factor, gaining only 30 yards, but the Bulls trust Vantrease more than Myers, and they’ll throw it if they need to throw.

When it comes to Tuesday night MACtion, you either love it or hate it, and Buffalo absolutely falls into the “love it” category. The Bulls have been outstanding on Tuesday nights as of late, going 5-0 ATS in their past five Tuesday contests. Not only do they tend to cover the number on Tuesdays, but they also tend to hit the totals. Buffalo has gone over in 10 of its past 11 Tuesday games and six of seven overall.

Miami, however, is on the opposite end of the spectrum. The RedHawks have covered in seven of their past nine games, but they’ve only gone 2-6-1 ATS in their past nine Tuesday contests. Buffalo also hasn’t been a friendly trip for the RedHawks as of late: the home team has covered in five of the past six games in this annual series.

Winds will blow from the south at 15 miles per hour, and thunderstorms are in the forecast for Tuesday night in western New York. Temperatures should drop into the low 60s at around kickoff.

Miami-Ohio is the defending league champion, but the reality is that Buffalo was the better team last season and should have been the East Division champion had the Bulls not blown the game with four turnovers. Buffalo has a different quarterback than it did a year ago, and Miami just got shredded by Ball State’s running attack, which isn’t quite on the level of the Patterson-Marks duo.

I expect Patterson to get the bulk of the carries in this game, and if the Bulls don’t shoot themselves in the foot again, I don’t see Miami hanging with them this time around. I’m taking the Bulls in a game I expect will see a lot of scoring. Bet your Week 11 college football picks on the house by taking advantage of a 100% real cash bonus offer on your first deposit of $100 to $300 at MyBookie Sportsbook!