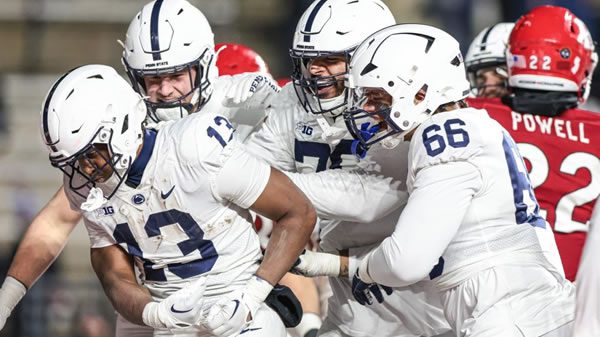 A year after failing to hold its lead in the Rose Bowl against Ohio State, Utah gets another shot to try to claim the oldest bowl on the slate. The last time Penn State won the Rose Bowl, it got a national title vote out of the deal in completing a perfect season, but that was back in 1995 before the college football season decided to choose an actual champion.

The Nittany Lions have since made the Rose Bowl twice and fallen to USC both times. They’re playing in this game for the first time since 2017, and once again doing so on a day that isn’t Jan. 1. College bowls move to Jan. 2 when New Year’s Day falls on Sunday, and somehow, Penn State has managed to make three out of four Rose Bowl appearances on Jan. 2. The Nittany Lions are 2-0 ATS in Pasadena on Jan. 2, as their only failed cover came in their one Jan. 1 appearance.

To make it 3-0 ATS on Jan. 2, Penn State will have to control the trenches. The Nittany Lions did that very well over the second half of the season, covering every game since the Michigan defeat. Utah has also closed strong with four covers in five outings, but there are genuine questions as to how strong those performances were. Utah’s wins over the final four regular-season games came against Colorado, Stanford, and Arizona, which went a combined 10-26 for the year. Utah did handle USC in the Pac-12 title game, but there have been questions about the strength of the Pac-12 all season long. If Utah can’t handle Penn State’s physicality, this could go badly.

How the Public is Betting the Penn State/Utah Game

The key to this game for the Nittany Lions will be how well their freshmen running backs can make holes in the Utah defense. Utah’s run defense mostly performed well this season, but it’s hard to make an argument that the Utes faced a good ground game other than UCLA. And the Utes didn’t handle the Bruins particularly well, giving up more than five yards a carry and allowing UCLA to run all over them the last time they were in this stadium. Penn State doesn’t have one running back in the mold of Zach Charbonnet; it has two. Nick Singleton and Kaytron Allen are both capable backs who are just freshmen, and each do a fine job of creating holes in opposing defenses.

That’s allowed Sean Clifford to take what the defense gives him and focus on avoiding mistakes with the football. For the most part, he’s done exactly that, throwing for 22 touchdowns against seven interceptions on the season. However, losing Parker Washington won’t help his cause, as Clifford has to play his last college game without his best receiver. There are also questions as to how long Clifford will play, as Penn State does want to get Drew Allar some experience against a good defense before next season. Clifford will play for most of the game if it’s close but expect Allar to get a series or two as the Nittany Lions look to take a step forward next year.

The good news for Utah is that the Utes were already used to playing without Tavion Thomas. Utah played without him in the Pac-12 championship game and got excellent production out of Ja’Quinden Jackson and Micah Bernard. The two combined for 193 yards and three touchdowns on 24 carries against USC, and with Thomas going the opt-out route, one or both of them is going to have to step up.

In the passing attack, it’s a really simple situation for Cam Rising. He’s got to limit his turnovers. The Utah quarterback has mostly done a fine job putting the ball where it needs to be, but in a few situations, things have gone wrong at the worst time. In Utah’s three defeats, Rising threw one touchdown against five interceptions, while he tossed 24 scores against two picks in the ten victories. When Rising throws at least one more touchdown than interception, Utah’s a perfect 10-0; when his picks either equal or outnumber his touchdown tosses, the Utes have yet to win. Rising’s task does get easier without Joey Porter Jr. in the lineup, but this is still a strong defense that tends to choke off opposing threats.

Penn State has racked up six straight covers, and although part of that is because the Nittany Lions hit the easy part of the schedule in November, they’ve still had to play up to expectations. Penn State has mostly dominated against the teams it should, with the only failures to cover coming against Michigan and two also-rans in Northwestern and Central Michigan.

Utah has also played well according to expectations against lesser competition. The Utes are also a team led more by their offense than their defense. Utah’s magic number for the year has been 32 points; when the Utes hit it, they haven’t lost. When they don’t, they’ve gone just 1-3, getting their only low-scoring win against Washington State.

With a rainy weekend in the forecast, the organizers are probably just fine with the game being played Monday and not Sunday. Temperatures will sit at a mild 60 degrees, with the wind blowing south-southeast at 5 miles per hour.

Penn State’s played very well over the past month-plus, and I have real questions about Utah and its strength of schedule over the past couple of months. Cam Rising has played well for the most part, but I really don’t like the turnover issues against good opponents. Penn State can force mistakes, and if you force Utah into mistakes, the Utes are quite beatable.

I think Penn State might win this one outright. Give me the Nittany Lions to cover. Question! Do you like to save money? Do you find it ridiculous to waste money? Then why are you still laying -110 odds at your bookie when you could be laying only -105 odds? It doesn’t make any sense to overpay! Make your dollars stretch farther in 2023! Bet smart by signing up for a betting account at BetAnySports!