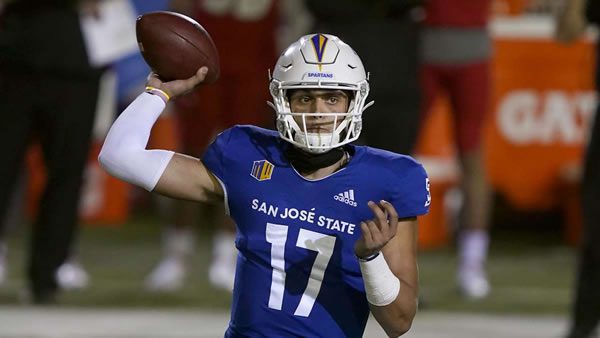 After one of the best seasons in school history, San Jose State is finding out that it’s not so easy going from underdog to favorite. The Spartans ripped through the Mountain West without a loss in 2020 and were barely even scratched, winning all seven games by double digits. But they came to earth hard in a 30-7 loss to USC, and there are now real questions about just how good this team is after the Trojans turned around and lost to a weak Stanford squad.

Hawaii has only proven that it’s got a weak defense, as the Rainbow Warriors are averaging 41.3 points per game given up in this young season. Hawaii wasn’t expected to be any better than 1-2 at this point after visiting two Pac-12 schools, but giving up 44 to UCLA and 45 to Oregon State wasn’t exactly what they had in mind after three consecutive winning seasons and an appearance in the 2019 Mountain West title game. Hawaii continues to try to sling the ball, but they haven’t been all that convincing so far, as several drops against UCLA ruined any chance of them competing.

How the Public is Betting the San Jose State/Hawaii Game

The public is convinced that points are coming, and it has pushed the total up from 59.5 to 61 for this matchup. The spread hasn’t changed, but 66 percent of tickets are on San Jose State.

When San Jose State Has the Ball

The Spartans appear to have abandoned their dual-quarterback scheme of a year ago and are now fully committed to Nick Starkel under center. So far, Starkel’s play suggests that it was the right decision, as the former SEC signal caller has looked right at home in his second year in this offense. He did struggle with two interceptions against USC, but he also threw for 308 yards and had to force a few throws when San Jose State fell behind early.

Getting a run game behind him would help a lot, but so far, San Jose State has struggled to get things going on the ground despite returning its top three ball carriers from a year ago. Tyler Nevens got most of the work against the Trojans, but at only 3.9 yards per carry, he’s not doing enough to make up for losing Starkel’s top two targets from a season ago. Either the ground game has to get better, or Starkel is going to be facing a lot of difficult coverages as opponents dare the Spartans to beat them on the ground. That said, Hawaii probably can’t afford to dare San Jose State to do anything in this matchup, as the Rainbow Warriors are giving up almost 300 yards a game through the air despite facing an FCS school. This might be a game in which run deficiencies are really irrelevant.

Hawaii is still going to try to air it out, but Timmy Chang’s not walking through that door. Chevan Cordeiro is trying his best to imitate the old run and shoot days of June Jones, but these days, everyone knows what Hawaii is going to do and has the personnel available to slow it down.

Against Oregon State, Cordeiro had 49 pass attempts, throwing for 366 yards and two touchdowns. But far more important to the Beavers was the fact that Cordeiro tossed two interceptions, which gave them the edge they needed to pull away and force Hawaii to get desperate.

Of course, a desperate Hawaii really isn’t all that different from their usual situation, as the Rainbow Warriors haven’t been able to run the ball at all. Against Oregon State, Cordeiro was the leading rusher and the only one to break 25 rushing yards, which really isn’t where the Rainbow Warriors want to be. Calvin Turner did manage two rushing touchdowns, but he only notched 21 yards on 10 carries, so if the pass game isn’t operating at a high level, the Rainbow Warriors don’t really have a Plan B.

San Jose State has been a cover machine in this series, as the Spartans have gone 7-2 ATS against the Rainbow Warriors, including four straight covers. San Jose State has also been an excellent bet in its Mountain West openers, having covered seven of its past eight conference openers. Meanwhile, Hawaii has been a consistent fade, covering in just 12 out of its past 43 home games and going 1-5 ATS over its past six games.

You’d think the Rainbow Warriors would be a strong over play, but that’s not true either in conference play. Hawaii has played to the under in nine of its past 11 Mountain West games, in large part because the books have mostly figured Hawaii out over the past few years. That fits well with San Jose State’s defensive performances, as the Spartans have gone under in seven of their past eight games overall and in all five of their past five league games.

Wind can actually be a factor in this game, as wind will blow at 16 miles per hour toward the east-northeast. Otherwise, the weather won’t be a factor; it’s expected to be 76 degrees and partly cloudy in Honolulu.

San Jose State is the stronger team, and Hawaii doesn’t look like it’s up to the level needed to compete in the top half of the Mountain West. The Spartans shouldn’t have much trouble moving the ball on the Rainbow Warriors, and given that they’ve covered in five straight trips to Honolulu, this should be another productive trip for them. I’m not going to mess with the over here; give me the Spartans.