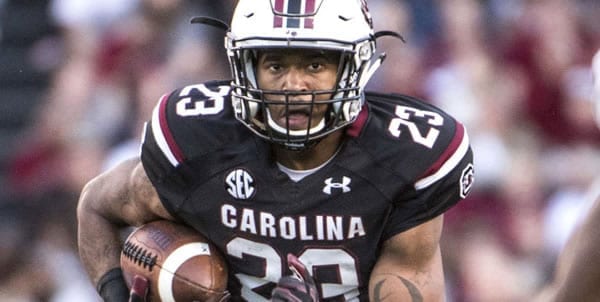 The No. 3 ranked Georgia Bulldogs return home this week for a showdown with their border rivals in the South Carolina Gamecocks highlighting an SEC East clash at Sanford Stadium. Despite being 24.5 point favorites against Tennessee last week, the Bulldogs were contested early and trailed 14-10 midway through the 2nd quarter in Knoxville. The Bulldogs rushing attack helped ignite the offense, and the defense stood tall the rest of the way as Georgia cruised to a 43-14 cover on the road. This week the Bulldogs return once again exactly as 24.5 point favorites inside the friendly confines of Sanford Stadium against another inferior opponent in South Carolina. Though the Gamecocks have historically been a thorn in the side of the Bulldogs, I am here to tell you why Georgia will be the play again this week!

If you look at this game from a historical standpoint or happen to follow the SEC closely, then you may know that these Georgia vs. South Carolina rivalry games have produced some great games over the last several years. The Gamecocks won 4 of 5 meetings from 2010-2014 during the height of the Steve Spurrier era. During South Carolina’s recent decline, the Bulldogs have scored four straight wins over the Gamecocks and have been the favorite in each game. Still, the Gamecocks have played Georgia extremely tough with a few really competitive games which echo the long history of this rivalry which has routinely produced hard-fought affairs from both sides of the field.

So with a history rich with close battles from both sides, why are we considering laying the 24.5 points? Well, I believe it is important to understand why the games have been close in recent years. South Carolina’s talent as perhaps the best it has ever been through that 2010-2014 stretch. Even in recent years that have resulted in 4 straight losses, the Gamecocks defense has usually been able to keep those games competitive. This year’s Gamecock team does not produce that same defensive upside nor the reliability from the offense to believe this will be a competitive contest. Freshman quarterback Ryan Hilinski has struggled in his last two starts. Not to mention, the Gamecocks defense simply does not have the talent to compete with this explosive and powerful offense from the Bulldogs.

Georgia’s defense has national championship type caliber talent. The Bulldogs defense helped spur the turnaround last week in Knoxville with forced turnovers and scored a defensive touchdown. Once trailing 14-10, Georgia scored 29 unanswered points to close out the game. The defense shut down the Vols offense in the 2nd half, and they have shut down nearly everyone this year. In fact, Georgia has not allowed more than 17 points in any game this season and currently ranks 6th in the country in scoring defense. This week the defense gets another excellent match-up where they should hold a substantial advantage at every position and where the Bulldogs relentless pass-rush should feast against the Gamecocks offensive front and freshman quarterback.

For the Gamecocks to keep this game competitive, they have to hope for a low-scoring defensive affair. As a Gamecocks fan, I can attest South Carolina simply does not have the offensive firepower to get into a high scoring fast-paced game. Unfortunately for myself and Gamecock fans, I also do not think we have the size nor speed to contend with Georgia’s rushing attack. The Bulldogs have tremendous speed with running backs D’Andre Swift and Brian Herrien, who have combined for more than 700 yards with eight touchdowns through 5 games. I expect the running game to strive against South Carolina and keep the chains moving. From there, the highly efficient threat of Georgia quarterback Jake Fromm will be able to capitalize on openings down the field in the passing game. Expect Georgia’s offense to move the football with ease throughout the game and get help from their extremely talented defense for the 2nd straight week for another cover!

Jay’s Pick to Cover the Point Spread: Georgia -24.5. Make Georgia a -4.5 favorite or South Carolina a +44.5 underdog by inserting your pick into a GIANT 20 point college football teaser at one of the web’s best: BetAnySports Sportsbook! You can add in NFL games too!