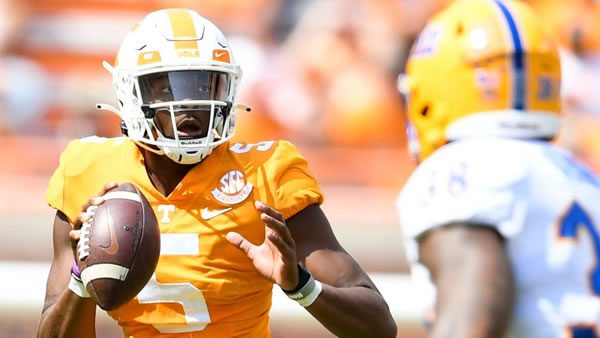 Point Spread: TENN -3/LSU +3 (BetAnySports – Did you know that you can lay -105 odds instead of -110? Imagine how much money you’d be saving betting at reduced juice! It’s FREE!)

Tennessee now gets back to action after taking a week off, which could work either way in terms of momentum. The Volunteers have looked like a solid team to this point in the season, but there are also genuine questions as to if Tennessee has really played anyone who is all that good. Pittsburgh and Florida looked like they could be good wins, but the Panthers just lost to a bad Georgia Tech team, and the Gators have looked pedestrian at best. The Vols haven’t looked threatened for most of the season, but LSU looks like it represents a real step up in quality with its defensive abilities.
Looking impressive has not been part of the equation for LSU at all this season, but the Tigers have actually played fairly well since losing to Florida State on the game’s final play. LSU has had to win with defense this year and has actually done a fine job of it, holding all of its opponents to 24 points or less and everyone except the Seminoles under 20. That isn’t how Tennessee plays at all, as the Volunteers like to score early and often this year. Tennessee hasn’t scored less than 27 points in regulation and hasn’t failed to hit the 30s this season in four games. But with Cedric Tillman on the sidelines, will Tennessee’s high-flying passing attack start to run into problems?

How the Public is Betting the Tennessee/LSU Game

The public is on the side of the Vols, but the sharps are not so sure. Despite 67% of tickets on Tennessee, the line has flirted with LSU +2.5 before settling back at +3. The total has risen from 62 to 63.5.

Losing Tillman doesn’t mean that Tennessee doesn’t have any ability to move the ball. In fact, the Volunteers are still very capable of moving the football and scoring points, which they showed in scoring 38 points on Florida without Tillman. Bru McCoy stepped into the void nicely with five catches and more than 100 yards, and the Tennessee ground game ate through Florida’s front seven and averaged 5.4 yards a carry with three scores.
But trying to beat LSU’s defense has proven to be a difficult task this season. The Tigers held Auburn to just 3.3 yards per carry last week, and LSU has proven to be a team that can defend both the run and the pass quite well. With Hendon Hooker as liable to run as he is to pass, the Volunteers are likely to run into some stiff resistance from the LSU front seven in trying to find holes on the ground. A passing attack isn’t enough to beat LSU, as Mississippi State learned earlier this season, but it’s probably Tennessee’s best bet of managing the game and giving itself a chance.

The way you beat Tennessee is pretty simple: take to the air and let your receivers beat the Vols’ weak secondary. And that is exactly the opposite of what LSU does well, as Jayden Daniels is a run-first quarterback, and LSU doesn’t really throw the ball all that often or all that well. Against Auburn, Daniels was a mere 8-for-20 throwing the football, but LSU won the game in large part because of its ground game.
There isn’t any one true treat on LSU’s offense that teams need to focus on other than Daniels, and teams have mostly forced the Tigers to win games with their defense and with sheer numbers of carries to wear down opposing defenses. Like Hooker, Daniels is going to take off and go at the first opportunity, which happened a lot against Auburn. Last time out, Daniels got 16 of LSU’s 49 carries while Josh Williams received 17, which underscores just how much the Bayou Bengals were able to run the ball on the Auburn defense. The problem is that Tennessee’s run defense rates in the top 20 nationally, but its pass defense ranks near the bottom of the barrel. If LSU does try to pass, there will be plenty of chances to do so, but the Tigers are likely worried that they’re going to run into their own issues if they make Daniels win with his arm.

More Picks: Get Jay’s Auburn at Georgia analysis plus point spread pick for their 10/8/22 game

Strangely enough, when these teams have met, it’s been the road team that actually gets the job done. The teams don’t play often, but the road team is 6-0-2 ATS in the past eight matchups between the rivals from different divisions. Where Tennessee has struggled is in covering when it’s in the SEC. However, the Volunteers have just one cover in their past six league games. LSU has done no better in October. The Tigers have just one cover in their past six games overall during this month.
For the total, we’ve got two conflicting trends here: Tennessee has cashed the over in 13 of its past 16 games, while LSU has played to the under in five of its past six games in the SEC.

Saturday will be a pretty good day for football in Louisiana, with temperatures hitting around 78 degrees at kickoff and winds blowing east-northeast at seven miles per hour. With 99 percent cloud coverage in place but no rain in the forecast, the weather should work out.

Tennessee has played really well against some middling teams and has played really well against the run. The Volunteers cannot defend the pass at all, but LSU doesn’t seem to trust its passing game. Combined with the early kick, the stage is set nicely for the Volunteers to cover the small number. Give me Tennessee. Bet your Week 6 college football predictions for FREE by taking advantage of a 100% real cash bonus up to $300 when you use bonus code PREDICT100 at MyBookie Sportsbook!