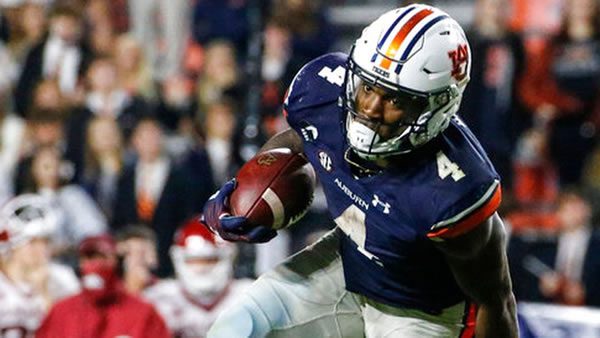 Point Spread: AUB +29.5/UGA -29.5 (Bet the Dawgs at -9.5 by inserting them into a massive 20 point college football teaser offered at Wagerweb Sportsbook)

The Georgia Bulldogs had to rally from a 22-12 4th quarter deficit at the hands of Missouri last week to stay unbeaten. The Bulldogs were enormous 31-point favorites but just barely escaped Columbia with a 26-22 victory thanks to a pair of 4th-quarter rushing touchdowns from running backs Kendall Milton and Daijun Edwards. As a result of the unexpected and unimpressive performance, the Bulldogs lost the top ranking in the college football polls but will try to get back their top spot when they host the Auburn Tigers between the hedges on Saturday at Sanford Stadium.

After suffering a blowout 41-12 loss to Penn State back in week 3, Auburn has split their opening two SEC contests with a 17-14 victory over Missouri and a 21-17 loss to LSU last Saturday. Unfortunately, Auburn’s struggles have resided on the offensive side of the football, where they rank 107th in the FBS, averaging just 22.4 points per game. Needless to say, the Tigers have some major concerns on Saturday when they faceoff with the number 1 defense in college football. In fact, the 49-point total is the lowest total in SEC match-ups this weekend which points to concerns around not only Auburn’s offense but also a Georgia offense that struggled in last week’s win over Missouri.

The Tigers have felt the unpleasant early struggles at the quarterback position this season. Junior QB T.J Finley has been downright awful, with one touchdown pass and four interceptions. Last week, Finley was sidelined with a shoulder injury which provided freshman QB Robby Ashford, his first start of the year. Ashford is far from a polished option behind center but provides the better dual-purpose threat. The problem is Ashford is still very inconsistent and inexperienced, which we saw last week against LSU when he hit just 19 of 38 passing for 337 yards with two touchdowns and one pick. While the concerns linger, Ashford appears to be the best option the Tigers’ have, and he is expected to get the nod once again on Saturday.

I’ve watched Auburn a lot this year, and while they could produce some success against Georgia on the ground, I have absolutely no faith the Tigers will be able to make much happen against the superior Bulldogs’ defense. I would not be surprised to see Georgia force a few turnovers in this game and take advantage of short-field opportunities. Even with that thought in mind, the Bulldogs are going to have to perform much better (offensively) to cover a near 30-point spread. Despite all the praise Georgia QB Stetson Bennett continues to receive, he is still a game-managing style of quarterback.

Instead, the Bulldogs’ offense still relies heavily on the rushing attack, which is a timeshare between tailbacks Kendall Milton, Daijun Edwards, and Kenny McIntosh. From a match-up and handicapping standpoint, the Bulldogs have not exactly been as explosive this season in the run game sans Zamir White and James Cook. The Auburn defense that will oppose Georgia’s offense is no push-over by any stretch of the imagination and will be prepared for that somewhat predictable rushing attack. Without a big performance from the Bulldogs’ defense, I think the Bulldogs will be challenged with the 30-point margin.

The Georgia defense has posted two straight underwhelming performances against the likes of Kent State and Missouri, where they allowed 22 points in each game. With that said, I’m not convinced the defense is the concern. Georgia’s offense has not shown the ability or potential for huge scoring performances, which is concerning in the weekly grind of conference play. If Georgia’s offense has anything less than a breakout performance, I think the Bulldogs will struggle to cover the spread. As a result, I like my chances with Auburn and the points.

Jay’s Pick: Take Auburn +29.5. Bet your Week 6 NCAA football picks for FREE by scoring a 50% real cash bonus at the web’s best sportsbook: Bovada! They give you rebates on every bet; even if it wins! They have the BEST live betting platform on the web and offer the fastest crypto payouts on the web! What more could you ask for?