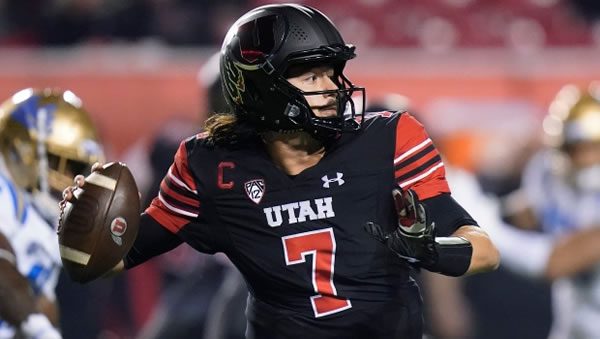 Point Spread: UTAH -4.5/UCLA +4.5 (Make the Bruins a +24.5 underdog by inserting them into a massive 20 point college football teaser found at Wagerweb Sportsbook!)

The loss to Florida in Week 1 now feels more like a fluke than anything else that’s happened in this college football season, as Utah has rebounded with four wins to set itself up to make a run to the Pac-12 championship. The Utes have made a living off of turnovers since that night in Gainesville, as they are now plus-seven in the turnover battle and have basically shut down all of their opponents to this point.

UCLA isn’t as heavy on its defense, but the Bruins have really made a living off of strong offensive play and not shooting itself in the foot. Against a previously undefeated Washington last week, the Bruins made sure not to hand the Huskies the free possessions they’ve needed all year to get results. Instead, they held on to the football, put up 40 points, and cruised to a victory even when Washington made a late charge in the fourth quarter. But having Utah come to Pasadena has never worked out well for the Bruins ever since the Utes joined the Pac-12. In four meetings between the teams in the Rose Bowl, Utah is 3-1, having won the past three matchups in Pasadena. In fact, UCLA has lost five in a row to Utah and hasn’t beaten the Utes since 2015. Utah no longer blocks UCLA’s path to the Pac-12 title game now that divisions don’t exist anymore, but even without that situation, this is the true measuring stick for the Bruins to see if they are really Pac-12 contenders.

How the Public is Betting the Utah/UCLA Game

With a quarterback who makes good decisions and three difficult-to-defend pass-catchers, you would think that Utah’s passing attack would be simply unstoppable. You’d be right if two of the three pass-catchers weren’t tight ends, which has made Utah a fairly weird attacking team. The Utes do boast a strong wideout in Devaugh Vele, but no other wideout has more than eight catches on the season. Instead, Utah prefers to go to tight ends Dalton Kincaid and Brant Kuithe, with running back Micah Bernard also a solid option out of the backfield. Rather than hit you with a big play, Utah relies on Cam Rising’s intelligence and arm, figuring he’ll beat the defense eventually.

Rising has just two interceptions on the year against 13 touchdowns, and other than the Florida game, he really doesn’t try to force what isn’t there. Throw in a solid ground game led by Tavion Thomas, and it’s clear that Utah is what it usually is: a smart, well-disciplined team that can make plenty happen and will not beat itself. The Utes could be flashier, but they win with substance, not style points.

When UCLA Has the Ball

On the surface, this looks like Zach Charbonnet’s game to try to win. That’s no disrespect to quarterback Dorian Thompson-Robinson, who has thrown just one interception on the season, but the running game is the best way to beat the Utes’ defense. Utah has been scarily good at slowing down the pass but only average against the run, so Charbonnet is likely to get the call as the man to try to turn this game into a 6-0 start for UCLA.

When UCLA does pass, look for Jake Bobo to be a big part of the offense. Bobo has more receiving yards than anyone else catching passes than Utah (his 363 yards is more than double that of No. 2 Kazmeir Allen), as he presents a matchup nightmare because he’s 6’5″ and a game-changer in the red zone. Last time out against Washington, Bobo hauled in six catches for 142 yards and two scores, mainly because the Huskies had nobody who could stay with him on defense. Utah should be a little better in that department, but look for Bobo to be one of the main options along with the ground game.

If we’re going by the rule that good teams win and great teams cover, then Utah would qualify as great in this series. The Utes have had no problems covering against UCLA in their five-game winning streak against the Bruins, covering in all five meetings. They’ve also never failed to cover in the Rose Bowl since joining the Pac-12 (even if you include their meeting with Ohio State), as they’ve come to Pasadena to play UCLA four times and covered every one.

But the Bruins are hot right now in Pac-12 play, covering in five straight league games and six of eight contests overall. However, the only team with a winning record that UCLA could cover against was Washington. The Bruins are just 1-5 ATS in their past six against a team above .500, and they’re yet to prove they can do it against a really good team more than once. The Over has also been a solid trend; it has cashed in six of seven of UCLA’s conference games and seven of eight Utah road games.

As the rest of the country cools off, Southern California will not. The temperature will hit 92 degrees at kickoff, with winds blowing five miles per hour to the south, meaning fatigue could play a factor. The one plus is that clouds should not be a factor at all in this matchup.

UCLA has built a nice record, but the Bruins seem to need a team to beat itself rather than going out and taking the win for themselves. Utah should be more disciplined than Washington and should have no problem avoiding the costly mistakes that have killed UCLA opponents to this point.

Utah has dominated this series, and I like them to keep it going. Give me the Utes. Bet your Week 6 college football picks for FREE by scoring a 125% real cash bonus up to $400 in free wagers at GTBets Sportsbook! They’ll also give you a FREE half point every time you bet your favorite teams!