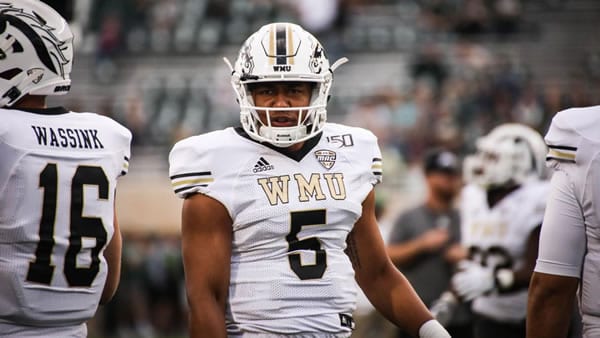 Neither of these teams really broke a sweat in their season openers, as both teams faced two of the nation’s worst FBS squads in Bowling Green and Akron. Toledo somehow managed to lose to Bowling Green last season, which proved to be a precursor for the Rockets falling back to earth and finishing last in the division. The main problem for Toledo was its defense, as the Rockets really couldn’t stop anyone down the stretch last season. Over the final six games of the season, the best they managed to do was hold Northern Illinois to 31 points.

One of their few bright spots, however, was against Western Michigan. During a 4-1 start, Toledo won back-to-back home games against BYU and Western Michigan, putting a complete effort together in a 31-24 victory. That ended up being very costly for the Broncos, who ended up on the outside looking in at the MAC championship game. After throwing away their shot at the title last season, the Broncos believe they have the defense needed to claim what they should have won a year ago. But Western Michigan has had to replace its quarterback and running back, and facing Toledo is a massive step up from going against Akron. Can the Broncos come up with a victory and put themselves in the driver’s seat for the divisional crown?

How the Public is Betting the Toledo/Western Michigan Game

The public likes the home team here, as 60 percent of tickets are coming in on the Broncos. However, that hasn’t been enough to change the spread. The total, however, has ticked up half a point from 59.5 to 60.

Toledo:
Offensive lineman Lavel Dumont is out for the season with a leg injury.

Is there really much of anything that you can glean from Toledo crunching Bowling Green in the opener? Iffy at best. The Rockets were able to do whatever they wanted against the Falcons, including run the ball an absurd 52 times in the win. Now, that could be because Bowling Green was just that weak against the run, but Bowling Green is also pretty poor against the pass, so it’s more likely that this just happened to be what Toledo wants to do with its game plan moving forward.

If so, it’s probably a solid plan. Bryant Koback and Shakif Seymour are a veteran duo that is capable of wearing down just about any defense, and they’ll need to be against a Western Michigan defense that seemed to be quite susceptible to the run against Akron. Koback gashed the Broncos for 177 rushing yards last season, which allowed Toledo to both build an early lead and control the time of possession from beginning to end.

When it comes to the air, Toledo appears to be pretty balanced with Eli Peters under center. Bryce Mitchell was the leading receiver against Bowling Green, but he was one of five pass-catchers in that game against the Falcons. Whether Toledo plans to spread the ball around against better competition remains to be seen, though, because virtually anything would have worked for them against the hapless Falcons.

Just like Toledo, Western Michigan learned virtually nothing from beating the tar out of Akron in its season opener. However, facing such a weak opponent was probably at least a little bit helpful for the Broncos because they were able to break in some new players at their skill positions. Kaleb Eleby officially took over as the quarterback for Western Michigan and looked pretty comfortable in the role, completing 12 of 16 passes for 262 yards and three scores.

However, the running game is still a work in progress for Western Michigan. The good news for the Broncos was that La’Darius Jefferson, Sean Tyler, and Jaxson Kincaide all did enough to show that they can carry at least some of the load in this offense. The bad news is that none of them stood out enough to make the job theirs, so the Broncos are still looking for a real running attack that they can count on against better teams than Akron.

The other question for the Broncos is whether the passing attack is really going to be able to get the job done against a secondary that isn’t incompetent. D’Wayne Eskridge and Jaylen Hall combined for 182 receiving yards, but they got all but 38 yards on two catches. Toledo’s defense should be at least slightly better than Akron’s, which could make the job challenging for the Broncos.

Tim Lester has to get more out of his team when it faces Toledo. The Broncos have dropped three in a row against the Rockets since Lester replaced P.J. Fleck in Kalamazoo, and with the exception of last year, none have been particularly close. The main reason that the Broncos haven’t had more success against the Rockets is that Toledo has been remarkably consistent at scoring a ton of points against Western Michigan. Other than 2014, Matt Campbell’s final year with Toledo before moving to Iowa State, the Rockets have scored 30 or more points in nine of the last ten matchups with the Broncos.

It’s a good thing there aren’t any signs of precipitation because temperatures could drop all the way to 29 degrees by the time we get going on Wednesday. Wind won’t be much of a factor here, as it’ll only be four miles an hour from the west-southwest.

I feel a lot better about the Toledo offense than I do about any other unit on the field, but that doesn’t mean that I feel great about the Rockets in this game. Toledo hasn’t done anything to show me that it’s really a better team than it was a year ago and beating Bowling Green by 35 certainly doesn’t change that.

I really don’t want to take either team in this game because I’m not sure I can trust either one, but if I have to make a choice, I’ll go with Toledo and the points. However, I feel best about taking the over in this one. Bet this one for FREE by scoring a 100% real cash bonus on your first deposit of $100 to $300 at MyBookie Sportsbook!