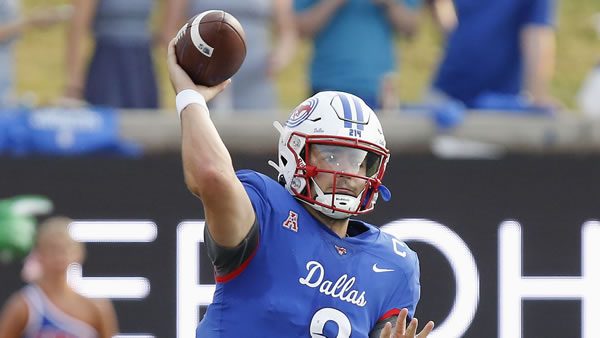 The Green Wave is crashing hard this season, as what looked like it could be a breakout season for the Wave is now turning into a year where postseason play seems increasingly unlikely. Now they get what’s probably the last thing they need: a trip to Dallas to play an undefeated SMU.

Southern Methodist isn’t only establishing itself as a real contender in the American; it’s also controlled this series for years, having beaten Tulane in nine of the last ten meetings. The Green Wave haven’t beaten the Mustangs since the schools were members of Conference USA, and even then, the Wave couldn’t get the better of the Ponies when they made the trip to Dallas. Tulane hasn’t won this matchup in Dallas since 2007, as SMU has slowly rebuilt itself into a team that’s legitimately capable of competing for conference titles.

At this point, SMU is on track to play for the American title if it can stay undefeated and keep pace with Cincinnati, and the Mustangs are about to face a four-game stretch that sees them visit Houston and Memphis before making the trip to southwestern Ohio for what could be the game that decides the American. With such a road ahead, the question here is whether SMU will be focused on Tulane or looking past what should be an overmatched opponent.
How the Public is Betting the Tulane/SMU Game

Once again, the public is on the side of the favorite, but the pros are on the side of the dog. The sharps have pushed the spread under the critical number of 14 to -13.5, despite 78 percent of tickets coming in on the Mustangs. The total has also ticked up slightly from 69.5 to 70, as sharps expect a better showing from the Tulane offense.

Tulane:
Wide receiver Mykel Jones (knee) is out for the season.

SMU:
Running back T.J. McDaniel (ankle) is out indefinitely.

Tulane can’t make up its mind as to who it wants to run the ball, which means that nobody really gets into the flow of the offense, and the Wave don’t end up getting going until the second half, which proves to be too late to matter. Tulane did manage to fight back from a 31-7 deficit to get back to 31-23 against East Carolina, but the Wave used up their energy in the third quarter and couldn’t fight off the Pirates in the final quarter.
This is a decent offense that often gets undone completely by its poor defense, and when Michael Pratt has a bad day throwing the ball, things can get out of hand in a hurry. In that game against East Carolina, Pratt tossed three of the five interceptions he’s thrown this season and pretty much ended any chance of his team staying in the game. The Wave’s best chance of getting a result is to run heavy with Cameron Carroll and let him get established, then mix in some short passes to Tyrick James. If Tulane’s offense is on the field, that means the defense can’t blow the game for them.

This isn’t your father’s Pony Express. This is a team that chews up yards quickly through the air on the strength of Tanner Mordecai’s arm and mixes in some solid running from Ulysses Bentley IV. Bentley only carried the ball twice against Navy because of injury, but he’s reportedly healthy now and should be able to get back into the mix of the offense against Tulane.

The big question here will be what SMU chooses to attack because the Green Wave has proven almost totally incapable of stopping anybody. Out of six opponents, four have torched Tulane for 40 points or more, with Mississippi’s potent offense lighting up the Wave for 61 points. SMU isn’t likely to do that kind of damage, but the Mustangs have the choice to throw or run as much as they want, which means betting the total is risky.

The best plan here is to live bet this and watch how the Mustangs approach their first two series. If SMU has success with the run early, that means the clock is likely to keep moving, which will make it very difficult to approach the total. If the Mustangs take to the skies right away, the total will easily be breached.

Here’s the good news: Tulane has covered in six of its past eight meetings against SMU. Here’s the bad news: both of the two ATS losses were in Dallas. In fact, the road, in general, has been a dark and depressing place for the Wave, as they’re just 3-7 ATS in their past ten games as a road dog. SMU, on the other hand, has been excellent at Ford Stadium, covering in four straight at the building not named for the 38th president.

Interestingly, the Mustangs have actually been an under team despite their great passing attack, as the total gets set too high for them to hit it. Tulane, on the other hand, because it can’t stop anyone, has gone 6-1 to the over in its past seven games.

After a hot day in the Metroplex, it’s going to be very pleasant for football at night, with temperatures falling into the 60s and wind blowing at just five miles per hour.

This spread is a bit higher than I want it, but I think SMU is the better team and should keep rolling in this one. With sharp money coming in on Tulane, I think I’d wait a couple of days to see if I can get the Ponies for a couple of points less and get a better price on them. But if this is as good as it gets, I’ll still back the Mustangs at home. Did you know that you can move the line TWENTY POINTS on college football games by using the massive 20 point college football teasers at Wagerweb Sportsbook? A fun way to bet!