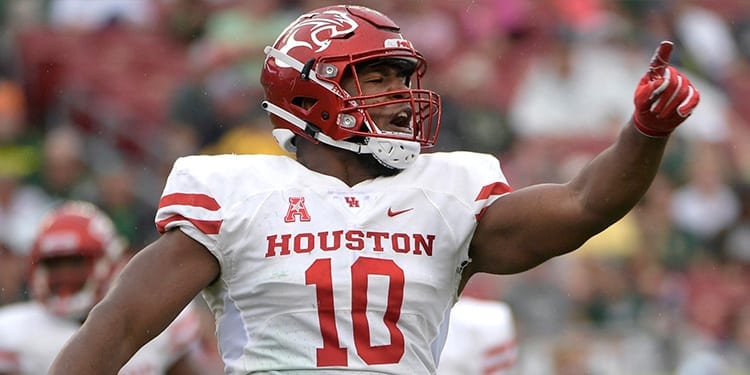 For the 2nd time in two weeks, the Tulsa Golden Hurricane will take the Thursday spotlight when they go into TDECU Stadium for a conference showdown with the Houston Cougars. Two weeks ago, the Golden Hurricane dropped their 3rd game of the year on the road at Temple in a disappointing offensive performance. The Tulsa offense has struggled throughout the season and remains the biggest hurdle for the Golden Hurricane to right the ship. Unfortunately for Tulsa fans, they face another daunting matchup this week that is poised to heighten the frustration and potentially extend their losing marks that currently stand at 1-3 SU and 1-3 ATS.

This Thursday’s American Athletic meeting between Tulsa and Houston is a pretty lop sided mismatch. Tulsa has struggled in nearly every facet of their offense ranking 105th in total offense and 101st in the FBS in scoring. Not only has the offense struggled to move the football but they have no solutions. The quarterback situation has been horrible with Luke Skipper who has tossed more interceptions than touchdowns. The only glimmer of hope has come from the backfield where Shamari Brooks and Corey Taylor have had their moments. Still, this offense is not built to rely on the running game hence the problem yet this Thursday they have to keep pace with one of the best offenses in the conference. No problem, right?

Houston has one of the best offenses in College Football

The American Athletic Conference has gained some notoriety in recent years. UCF’s claim towards last year’s National Championship received a lot of attention. Before that Memphis made a really strong run in 2017 and it was the Cougars who posted the memorable 13-1 campaign in 2015 under former Head Coach Tom Herman. All of these breakout stories from the AAC in recent years have been a result of dynamic offenses that possessed the ability to strike on any given play at any given moment in the game.

Despite the loss to Texas Tech, Houston still has the opportunity to be the AAC’s breakout story this year. The offense is loaded and has the ability to run the table. Quarterback D’Eriq King has been great averaging right at 300 yards per game and has 15 touchdowns on the year with just 1 interception. The offense spreads the ball around and creates space as good as any offense in the country. They have a great receiving group with size and speed that will hold matchup advantages throughout the Tulsa secondary. The offense simply has to execute like they have all season and the plays will be there. On the season, Houston is averaging 609 yards per game which ranks first in the FBS and they also currently rank 2nd in scoring behind Alabama averaging 52 points per game. Do not expect those numbers to change this week as Houston lights it up under the Thursday prime-time spotlight.

Not only does this matchup favor heavily towards Houston’s efficient offense but the turnover trends also point in the direction of the Cougars as well. I don’t typically bring turnovers into my handicapping discussion unless I feel like it is warranted and this is one of those situations that you cannot avoid the turnover concerns for Tulsa. I mentioned earlier quarterback Luke Skipper has tossed more interceptions than touchdowns. The ratio currently stands at 6 picks with just 4 touchdowns on the season.

Skipper also sports a dismal 55% completion percentage and consistently makes bad decisions with the football. He is a turnover liability and the rest of the Golden Hurricane have had their share of turnovers as well. In fact, Tulsa ranks 2nd to last in turnover margin in the FBS with a -1.75 margin per game. Only North Carolina has a worst average at -2 per game. If these trends hold true, it only inflates Houston’s value to cover the spread. I am already expecting this Cougars offense to post a big number. If a few turnovers fall into their hands, that number could get really big.