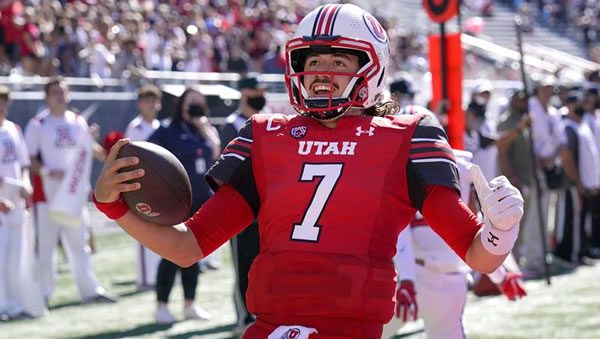 After decades of ducking everyone with a pulse outside the SEC or the state of Florida, the Gators finally agreed to play a home-and-home with someone. However, they might have miscalculated here, because that someone is a Utah team with legitimate Rose Bowl aspirations. The Utes got to the Rose for the first time last year and might have been a playoff team had they not gotten off to a slow start in September. Once they made Cameron Rising the starting quarterback, the Utes took off, winning nine of their final 10 games before losing a tight one to Ohio State in Pasadena.
On the other side, Florida was a mess a season ago. The Gators looked like they’d be a solid squad when they gave Alabama a tight game in September, but over the course of the back half of the season, they completely fell apart. Five losses in seven to close the season meant that Dan Mullen was handed his walking papers and Billy Napier took over in Gainesville. If he does nothing else but bring some discipline to the Gators, he’ll have taken a big step in the right direction, as Florida was minus-9 in turnovers a season ago. The Gators do have some talent, but it’s mostly inexperienced talent that’s still feeling out a new situation, which likely means this will be a tough ask for Florida, even in the Swamp.
How the Public is Betting the Utah/Florida Game

The public is buying the Utes just enough to start pushing this line. So far, 58% of tickets have come in on Utah, and the line has ticked up from -2 to -2.5 with signs that it might go to -3. The total is holding at 51.5.

Once Cameron Rising got established last year, nobody could slow down the Utes. After a 24-13 win over Washington State, Utah got rolling, only once scoring fewer than 30 points in its final 10 games of the season. Rising can take off and go when the situation calls for it as well as make excellent decisions with the football, which makes the Utes a nightmare to game plan for.
The same holds for running back Tavion Thomas, who went for 1,108 yards and 21 touchdowns a season ago. Utah always places a strong emphasis on its play in the trenches, and with a solid line in place, the offense should be able to shine from the word go this year. There’s a reason that this team is seen as a dark horse contender for the playoff: this might be the best attack in the Pac-12.

Running the ball well was one of the few things the Gators did right a season ago, as Florida managed to rip off 5.5 yards per carry. But the Gators’ pass attack just didn’t get going with Emory Jones, who finished with 19 touchdowns against 13 interceptions. Florida just couldn’t eat up enough yards through the air to compete with SEC attacks, leading to their first losing record in the conference since 2017.
Anthony Richardson is now the full-time starter for the Gators, and his decision-making has to be better. Out of 64 passes a year ago, five of them were intercepted. Granted, six of them went for touchdowns, but a feast/famine quarterback really isn’t a good recipe for any kind of real success. The Gators are going to have to rely on the offensive line in the early going, as Florida has four starters back on the line and could create a few decent holes in the Utah front seven. Last year, all three regular season Utah losses had one thing in common: the Utes gave up more than 200 rushing yards. Ohio State was the only team that beat Utah through the air, and Florida doesn’t have the same kind of players that the Buckeyes did.

When these teams play non-conference games, there’s been one common piece of advice: bet the other side. Utah is just 1-6 ATS in its past seven games outside the Pac-12, while Florida is 0-7 despite playing most of those games at home. The Utes’ numbers are a bit deceiving, as they’re skewed by three ATS defeats during the ill-fated Charlie Brewer era last season. Florida has no such excuse; the Gators have simply been poor for the past two seasons.
When it comes to points, something has to give here. Six straight road games have cashed on the over for Utah, while Florida has seen the under hit in six of its past seven in the Swamp. The lone exception, of course, was the memorable 70-52 win over Samford in which Florida gave up 530 yards to an FCS opponent.

In this case, waiting for television’s window is the perfect decision. Gainesville has been rather disgusting during the day all week long, but at night, the weather is ideal for football. These teams will enjoy winds of five miles per hour to the east and 71 degree temperatures at kickoff.

Florida is going to get better under Napier, but I don’t see it happening this quickly. The Gators have raw talent, but Utah is a disciplined, veteran group that’s been dealing with more difficult temperatures than what Gainesville will present. This team has been in tight spots before and should have no problem handling this one.
The Gators won’t embarrass themselves, but I also don’t think they’ll have enough to get either the win or cover. Give me the Utes. Note: We’ve arranged a SPECIAL unadvertised 125% bonus up to $400 in FREE bets when you use bonus promo code PREDICTEM at GTBets Sportsbook! They also give you a free half point everytime you bet your favorite NFL, college football, NBA and college basketball team!