Vols vs. Tide Odds & Pick Against the Spread 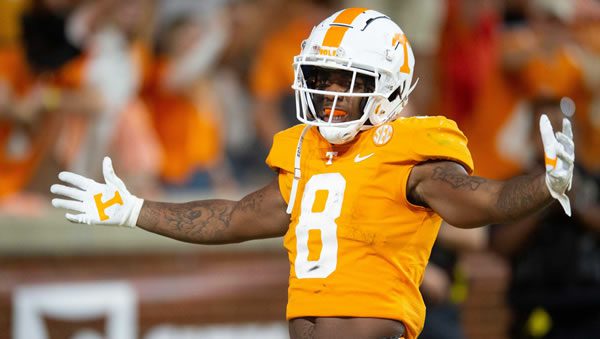 It’s the Third Saturday in October, or as Tennessee fans know it by now, yet another wasted weekend for their Volunteers. Alabama has won 14 straight in this series, and most of them haven’t been particularly close. Not only has the Tide won each of the past five meetings by at least 22 points, but Tennessee hasn’t broken 21 points against the Tide since 2003.
Tennessee has looked like it’s moving in the right direction on the field, but the end of the game against Mississippi proved disastrous for the Volunteers. Not only did the fans mar the ending of the game, but the Vols also lost Hendon Hooker to a leg injury and might have to go without him against an Alabama defense that completely shut down Mississippi State’s Air Raid. With the Tide bouncing back and the Volunteers now looking like they’re down a quarterback, this could yet again be a problematic situation for Tennessee.

How the Public is Betting the Tennessee/Alabama Game

The public and the pros are on different sides in this one, as 57 percent of tickets have come in on the Tide in this matchup. However, the pros have knocked the line down 2.5 points from -27.5 to -25, largely because Tennessee acquitted itself well against Mississippi. The total has ticked down slightly, falling from 67.5 to 67.

Will Hooker be on the field when the Volunteers come to Tuscaloosa? Hooker did a fine job directing the Tennessee offense to this point, throwing just one interception on the season, but his leg injury took him out of the final play against Mississippi and the Vols had to turn to Joe Milton, who has been nowhere near Hooker’s level of accuracy. If Milton has to play, this could be a major problem for Tennessee, as Nick Saban has already shown that his defense can stop quarterbacks as good as Matt Corral.
The best-case scenario for the Vols would be to see Tiyon Evans get rolling, but there are two problems there. First, Evans isn’t at 100 percent himself, and second, Alabama has a solid run defense. Jabari Small could have the job fall to him against a run defense that gives up just 93.3 yards per game on the ground. That’s not Georgia-like numbers, but it’s still pretty solid, and that could make for tough sledding for Tennessee if its best players aren’t on the field.

The biggest thing the Tide do is jump on opponents and dare you to find your way back into the game. Their defense is beatable, but the offense scores with such precision that it often doesn’t matter how many points the opponent puts up; Bama will just score more.

Bryce Young has thrown all over everyone Alabama has played, and he’s done it without forcing the issue and trying to take what isn’t there. Young has only thrown three interceptions against 24 touchdowns, and when the going does get tough, he’s got one of the best backs in the nation to rely on in Brian Robinson.

There’s a reason this offense is putting up 45 points per game right now, and it isn’t because of a weak schedule. It’s because this is a well-oiled machine that doesn’t try to do too much and will simply attack whatever is left open. With Tennessee likely to have a hard time getting off the field, points could be plentiful here.

Tennessee’s scoring struggles against Alabama are well noted. What’s Alabama done to the Vols? 34 points or more in 10 of the teams’ past 11 meetings, so there’s nothing that suggests the Volunteers can keep the score down. Whether the over hits will be determined by whether the Volunteers can actually put up points of their own, and that could be a problem in this matchup.
Not only have the Vols struggled to get going on offense against Bama, but they haven’t brought their offense with them away from Neyland Stadium. Tennessee has played to the under in nine of its past 13 road games and is 8-3 to the under in its past 11 games in SEC land. That fits Alabama’s trends nicely, as the Tide have actually been an under team in October. What tends to happen is that people see the Tide’s offense dominate September, and then once Bama has dropped the hammer on non-SEC teams, the Tide turn to their defense to suffocate the teams who have decided to try to outscore them. It’s worked for Saban, as Bama is 4-1 to the under in its past five October games.

A night game will make the weather a bit of a factor, as temperatures will drop into the high 50s after spending the day in the upper 70s. Wind will not be an issue, with winds blowing at just five miles per hour to the Southeast.

I’m not liking Tennessee’s chances. The Vols have struggled to get the job done on the road and they’re playing with their two best weapons banged up, which is not what you need when you face Alabama.
The Tide makes it 15, and it shouldn’t be close. Give me Alabama here. Did you know that you could be laying less on your bets to win the very same amount? It’s called reduced vig and it allows you to bet on games at -105 odds instead of -110. Find this killer offer at BetAnySports Sportsbook!