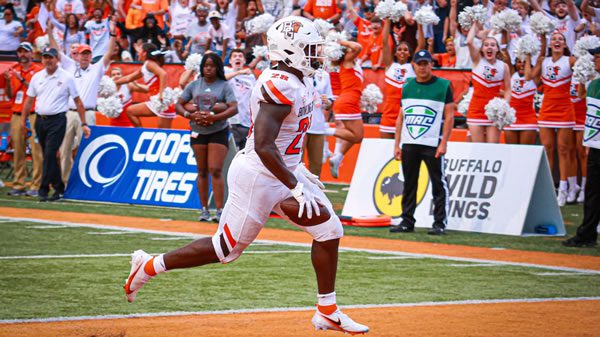 The surprise team in the MAC East meets up with the biggest disappointment in the MAC West, as Bowling Green is trying to stick around in the division and make a run to the MAC title game. The Falcons have long been the doormat of the MAC’s East along with Akron, but they finally have things moving in the right direction and have only lost to first-place Buffalo in league play this season. That does make their charge to Detroit a little unlikely, but the Falcons do have a good shot of making it to a bowl game.

Western Michigan is playing solely for a bowl game, as the Broncos have found themselves overwhelmed by a schedule that they thought they’d be more prepared to play. Losing their quarterback and best receiver to the NFL Draft meant that the Broncos quickly became also-rans in the MAC West, and having to play the likes of Pittsburgh at home in the nonconference meant that Western found itself in a tight spot as far as making a bowl game. The Broncos have almost no room for error if they want to return to the postseason; they must win three of their final four games to have any shot at qualifying.

How the Public is Betting the Western Michigan/Bowling Green Game

This offensive attack would have been so much more potent had the Broncos’ stars stuck it out for their final season in college. Instead, the Broncos have been mostly toothless and have had to rely on the defense to do much of anything. Jack Salopek has shown some flashes of getting things moving in the right direction, but he’s also just a redshirt freshman and has really struggled with his decision-making. For the season, he’s thrown just seven touchdowns against ten interceptions.

And that’s a problem because the best way to attack Bowling Green is by going to the air. The Falcons are very weak at defending the pass, ranking 112th against the air and giving up 270 yards a game through the air. The Falcons’ defense has looked a lot better in its past two wins against Miami and Central Michigan, and that’s a big reason why Bowling Green has cruised to wins in three of its past four games. Against this defense, Western Michigan might opt to again turn to Treyson Bourguet, a true freshman who came out of the bullpen and led the Broncos to an upset of Miami.

Of course, led is relative because Bourguet only completed 48% of his throws and averaged less than four yards a pass. The Broncos will likely have to pass to win this game, especially with Bowling Green likely to key on Sean Tyler and La’Darius Jefferson a bit hampered.

Simplicity is sometimes the right way to play football, and Bowling Green has rolled with that strategy. The Falcons don’t ask Matt McDonald to do too much with the ball; they trust him to make good decisions and take what is available. And that’s worked well, as the Falcons have succeeded by not turning the ball over. McDonald has 16 touchdowns and just three interceptions on the season, even with the Falcons not really getting a lot of help from their running game.

Against Western, the Falcons probably will try to pass their way to a win because this defense doesn’t match up very well with trying to stop Bowling Green. The Broncos don’t create turnovers and don’t defend the pass anywhere near as well as they do the run, which says that opportunities will exist for McDonald to attack. It might not chew up a lot of yardage, but it likely will get the job done.

More Picks: App State at Coastal Carolina pick against the spread for 11/3/22 >>>

It needs to be prefaced with the fact that Bowling Green and Western Michigan no longer play every season, but it’s been a long time since the Falcons beat the Broncos at home. These teams only play twice every four years because they’re in different divisions, and the last time that Bowling Green won this game at home was 2004. Since then, Western Michigan has had no trouble putting up a lot of points in this matchup. The Broncos have topped 40 points in five of the past seven meetings, with the Falcons rarely getting their own offense working.

A defensive battle is statistically expected, but these teams tend not to do that when they face off. In the past ten meetings, only twice has the winning team scored fewer than 40 points, and the 2014 game in Bowling Green was the only time where the teams combined for fewer than 50 points.

There’s going to be a chill in the air in northwestern Ohio, but it shouldn’t be that bad. Temperatures will hit 46 degrees, with the wind blowing south-southeast at five miles per hour.

Western Michigan’s weakness is its pass defense, and so is Bowling Green’s. The problem is that the Falcons have an experienced leader in Matt McDonald, who doesn’t turn the football over, and the Broncos counter with either a true freshman or a starter who has had many problems throwing to his own team.

I’m going with the experience here. I’ll lay the points with the Falcons.