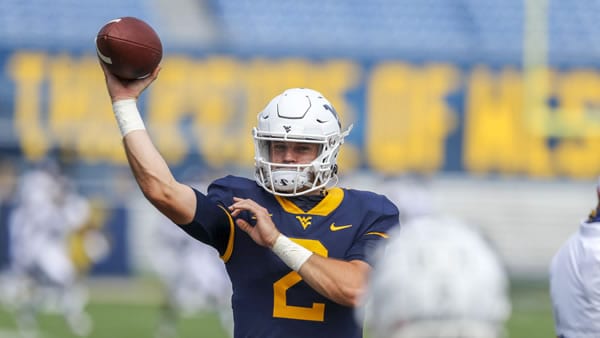 CFB betting odds: WV +16.5/Okla -16.5 (MyBookie - If you’re not with these guys you need to check them out! They’re by far the most fun book on the web with all kinds of odds booster bets, free bets, continuous bonuses (especially when depositing with bitcoin) and all kinds of other offers that are sure to make you love them! They’ve allowed us to offer a 100% bonus up to $300 when you signup and use bonus code PREDICT100)

The Oklahoma Sooners, coming off their lowest offensive output in five seasons last week, figure to produce a bit more scoreboard material when they host West Virginia for the Big 12 opener for both teams Saturday night in Norman. To say recent Sooners-Mountaineers games have trended high-scoring is an understatement; OU alone has hit the 50-point mark each of the last four meetings. How many points will the Sooners put up here? And how are we playing this game with our free college football betting pick?

Week 4’s college football betting lines opened Oklahoma at around -16, with an over/under of right around 59. Early betting action then bumped that spread to -16.5.

Any bettors out there thinking West Virginia might pull the upset here could get upwards of +600 on the college football betting money line.

The Mountaineers are 2-1 on this young season following their 27-21 victory over Virginia Tech last week. West Virginia took the lead for good two minutes into the game on an 80-yard scoring run, went up 14-0 three minutes later, and led 24-7 at the half. The Mountaineers then scored the first three points out of the locker room, let the Hokies rally to within six points with three minutes left but made a defensive stop deep inside their own red zone in the final minute to preserve the win and the cover as 1.5-point favorites.

West Virginia out-gained Virginia Tech 366-326 and out-rushed the Hokies 173-103, although, as mentioned above, 80 of those rushing yards came on one play. The Mountaineers also lost the turnover battle 2-0, and it nearly cost them the game.

West Virginia opened this season with a 30-24 loss to Maryland, although that defeat doesn’t look as bad now, with the Terrapins at 3-0. The Mountaineers then disposed of FCS Long Island 66-0, covering at -50.

WVU returned 17 starters this season, nine on offense and eight on defense, from a team that played 6-4 last season. The Mountaineers went off this season picked to finish anywhere from third to sixth in the Big 12, and our guess is they’ll finish closer to third than sixth.

The Sooners, meanwhile, are 3-0 on the season after holding off Nebraska last week 23-16. Oklahoma drove its opening possession of the game 75 yards to a touchdown but only led 7-3 at the half. The Sooners then scored the first seven points of the second half, later led 23-9, let the Cornhuskers get within seven points with five minutes to go but ran off most of the clock and hung on for the victory. However, OU never came close to covering the spread as a three-touchdown favorite.

The Sooners opened their season with a 40-35 win over Tulane but whiffed ATS at -31. OU then dispatched of FCS Western Carolina 76-0, covering at -52.

Oklahoma returned 14 starters this season, six on offense and eight on defense, from a team that played 9-2 last year. The Sooners are the favorites to win the Big 12 this season and excellent candidates to make the College Football Playoff.

More CFB Action: ND at WISC Pick Against the Spread

The Sooners are 8-0 SU, 5-2-1 ATS against the Mountaineers since the latter joined the Big 12 Conference back in 2012. Most recently, two seasons ago, Oklahoma drubbed West Virginia 52-14, covering as a 33-point favorite. Last season’s meeting was canceled.

So far, this college football betting season, teams ranked in the Coaches Poll are 45-7 SU but only 23-27 ATS vs. un-ranked teams.

Unders are 2-1 in West Virginia games this season, which are averaging 56 total points.

Overs are 2-1 in Oklahoma games this season, which are averaging 63 points.

Overs are 6-0 over the last six West Virginia-Oklahoma games, which have averaged a very healthy 84 points.

Oklahoma, which probably owns the best offense in the country this season, was just held to its lowest point total in five seasons last week; we expect a bit of an explosion this week. Also, West Virginia got a little lucky last week in that three Virginia Tech drives inside the Mountaineers’ 10-yard line produced zero points. That’s not gonna happen with this Oklahoma offense. We’re giving the points here with the Sooners. Start saving money TODAY by beginning to make ALL your bets at -105 odds, instead of the spendier -110 your sportsbook is socking you! Do the math! Add up how much you’d have saved over the past few years by betting at -105 instead of -110! Click here to start realizing this massive benefit today!