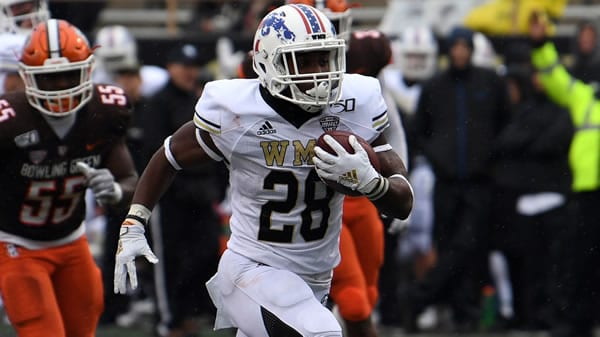 Point Spread: WMU +2.5/CMU -2.5 (Bookmaker - RIDICULOUSLY fast payouts. Never a hassle! If your bookie is a pain in your balls, make the switch. You’ll be so much happier!)

This might be the deciding game for the MAC’s Western Division title, as these are the only unbeatens left in the division. With Western already having beaten Toledo, the Broncos could essentially give themselves a one-game cushion with only the division’s three weaker opponents left on the schedule. However, Western barely escaped Toledo at home last week, needing two touchdowns in the final 45 seconds to pull the game out of the fire.

Central Michigan needed no such heroics against Northern Illinois, as the Chippewas never let the Huskies get started. Central Michigan’s defense dominated the game from start to finish, only surrendering a touchdown in garbage time after it had already built a 40-3 lead. The offense, however, remains a work in progress that’s still facing quarterback questions. But the defense has been dominant enough through two games that the offensive questions might not matter, as Central is the only team in the MAC holding its opponents under 300 yards per game and under 20 points per game. Can Central succeed where it failed last year and control the Western offense?

How the Public is Betting the Western Michigan/Central Michigan Game

The public is very much with the Chippewas on this one. Sixty-five percent of tickets have come in on Central Michigan, and the line has ticked up from -1 to -2.5 as a result. The total remains unchanged.

Central Michigan:
Quarterback David Moore continues to wait on the NCAA to reinstate him and is questionable. Defensive lineman Laquan Johnson (undisclosed) is out for the season, and running back Josh Crawford opted out of the season.

A year ago, Western Michigan rode the combination of quarterback Jon Wassink and running back Levante Bellamy to a 24-0 lead on Central, putting the Chippewas in a hole from which they could not escape. However, both Wassink and Bellamy have graduated, and this year’s offense is more of a work in progress than the well-oiled machine that greeted the Chippewas last year.

The good news for Western is that new quarterback Kaleb Eleby isn’t beating himself. He’s completing 71 percent of his passes for 546 yards, six touchdowns, and, most importantly, zero interceptions. He’s got an excellent top target in D’Wayne Eskridge, and he’s not afraid to go to him often. Eskridge already has 245 receiving yards and three touchdowns, nearly half of Eleby’s passing output.

When the ball stays on the ground, Western is finding success. Sean Tyler won’t make the Broncos forget Bellamy anytime this season, but he’s a capable young back who regularly scratches out five yards a carry and should only get better over the next three seasons. He’s also a solid outlet for Eleby if the situation calls for it, as he’s caught ten passes this season. In this game, Tyler might need to do more in terms of receiving rather than rushing because the Central defense has been tough against the run, giving up just 92 yards a game on the ground. What makes that more impressive is that one of their opponents was Ohio, and if you can get the Bobcats to go away from their ground game, you’re doing something right.

Like Western, Central is also missing an experienced quarterback. Unlike Western, there’s a chance that their quarterback could return, as David Moore continues to wait on whether he’ll end up reinstated and able to play. Daniel Richardson has performed decently through two games, but it’s clear he’s still learning how to succeed at this level. Central is relying more on its running game and its defense to this point, and with two solid backs in Kobe Lewis and Lew Nichols, it’s proving to be a winning strategy. Against Northern Illinois, the Chippewas rolled to 433 yards of offense, nearly 200 more than the Huskies.

The one thing the Chippewas have to do against Western is avoiding turning the ball over. Last year, Central actually outgained Western, but the Chippewas still blew the game because they turned it over three times, handing the Broncos some short fields and easy scores. Central has the advantage on offense this time around, with Western’s stars from last year no longer eligible. All they have to do is make sure that their drives end with points, and they keep Western from getting anything going.

Going on the road has been a real struggle for Western Michigan as of late, as the Broncos have covered in just two out of their past nine contests away from Kalamazoo. However, thanks to Central’s previous ineptitude before Jim McElwain took over in Mount Pleasant; Kelly/Shorts Stadium has been a home away from home for the Broncos. They’ve won their past four trips to Central, and none of those games were closer than 11 points.

However, these are not the same Chippewas of 2018, when Central went 1-11. These Chippewas have covered in eight of their past 11 games and seven of their past eight in Mount Pleasant. Plus, they’ve been virtually free money on Wednesdays as of late: Central has covered in 10 of its last 11 games on Wednesday night, and the one exception was a push.

As for the total, November is traditionally when Western gets rolling. The over is 14-3 in Western’s past 17 games in November, and that includes four of their past five conference games (all of which were played in November thanks to COVID) going over the total. Central has been no slouch at scoring either; four of the Chippewas’ past five games have seen at least 50 points.

It’s going to be chilly and clear in Mount Pleasant, ideal for November football. Temperatures will fall into the mid-30s, with winds coming at nine miles per hour and heading south.

I think Central Michigan comes in looking to prove a point here. The Victory Cannon has gone to Kalamazoo in five of the past six seasons, and Central hasn’t seen it come to Mount Pleasant and stay there after the game since 2010. Four straight home losses to Western has to irritate the Chippewas, and I think they have the better team this season.

I’ll back the Chippewas and their defense to get the job done here.Where are you betting your football picks? If you’re book isn’t giving you -105 odds (which we know he isn’t!) you need to dump him and start saving big money by betting at reduced odds. It’ll save yo a TON of loot! Find this great offer at BetAnySports! For those who like to do research before jumping in, check out our BetAnySports Review!