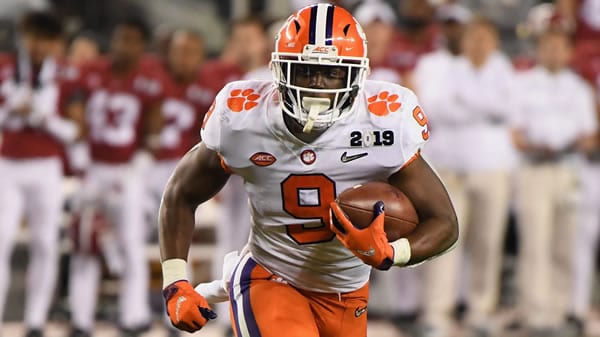 It has been two weeks since Clemson suffered a double-overtime loss at the hands of Notre Dame. Before the loss, Clemson had amassed several unbelievable streaks that included 36 straight regular-season wins, 28 straight ACC wins, and 50 straight wins on a Saturday. While I’m sure Clemson would have loved to keep the streaks intact, a road loss against a top 5 opponent in double overtime while your starting quarterback is sidelined is not the type of scenario that is going to remove Clemson from the College Football Playoffs discussion. On Saturday, 4th ranked Clemson looks to get back on track to keep their National Championship hopes alive when they travel to Tallahassee as huge favorites over the Florida State Seminoles.

The Seminoles have lost four of their last five games and stand at just 2-6 ATS on the season. The average margin of defeat in the last 4 out of 5 losses has been 22 points against the likes of Notre Dame, Louisville, Pittsburgh, and North Carolina State. Therefore, the fact that Florida State is currently listed as an enormous 33 point underdog is not that surprising when you consider their performance over the last several weeks. Last year, the Seminoles were 27 point underdogs on the road at Clemson. At the time, it was the largest spread in Florida State history as an underdog. Now, the Seminoles will be even bigger underdogs against Clemson as the line has expanded to 33 points.

Clemson QB Trevor Lawrence was sidelined in the loss to Notre Dame due to a positive COVID-19 test, but he will return for this Saturday’s road trip to Tallahassee. Certainly, Clemson wants to get back on track following the loss, and the match-up is extremely opportunistic. The Seminoles rank 102nd in the FBS against the pass allowing 270 yards per game through the air. I expect Clemson’s receivers to create plenty of space, which should provide a huge game opportunity for Lawrence. Meanwhile, Travis Etienne will find a way to inflict damage on the ground as well. There are not many match-ups that point into Florida State’s favor on defense this week. The question is, will Clemson keep their foot on the gas? Head Coach Dabo Swinney has routinely called off the dogs with big leads, and that has to be a consideration if Clemson jumps out to a big lead.

For the Seminoles offense, there is not a lot of room for optimism. QB Jordan Travis is a better runner than a passer. Travis leads the team with 469 rushing yards but has hit just 52% of his passes on the season with four touchdowns and five interceptions. Travis was unavailable last week with an undisclosed injury, which led to freshman QB Chubba Purdy getting the start. Purdy actually performed pretty well considering the circumstances. Purdy completed 15 of 23 passing for 181 yards with two touchdowns and ran for another 54 yards. It is unclear which quarterback will get the start this week. Neither has the greatest match-up or experience to feel comfortable against this aggressive defense, but Purdy gives them the best opportunity.

If you have read some of my prior previews this year on Clemson, I have made the statement several times that Clemson is not exactly a strong betting team as big favorites. Honestly, they have not been a strong betting team at all this season, going just 2-6 ATS; however, they have routinely failed to cover large spreads. The reason boils around simple math. The 2020 Clemson team is not the elite scoring threat that we have seen in recent years. The big names of QB Trevor Lawrence and RB Travis Etienne have perhaps pushed that narrative because they are possibly the best in the nation at their positions. However, the Tigers are not hitting big plays at an alarming frequency like some of their prior offenses.

Don’t get me wrong, the offense is still really good, sporting 45 points per game (9th in FBS), which is helped by the enormous 73 point outing against Georgia Tech. The problem is when you are being favored by more than 30 points with an offense that is routinely scoring in the 38-42 point range, the defense basically has to pitch shutouts to get the cover. Clemson’s defense does have an advantageous match-up against a turnover plagued Seminoles offense, and they will likely need to get a few turnovers to help cover this large spread. Unfortunately, I just think Florida State covers this spread at a higher percentage if they just get minimal offensive help.

Jay’s Pick to Cover the Point Spread:If Purdy gets the start, I like the Seminoles and the points. As it currently stands, the under 67 is the strongest bet for this game. Take the under 67. Bet this game live (and free) by taking advantage of a 50% real cash bonus at Bovada Sportsbook! They give you a rebate on ALL your action whether you win, lose or draw!