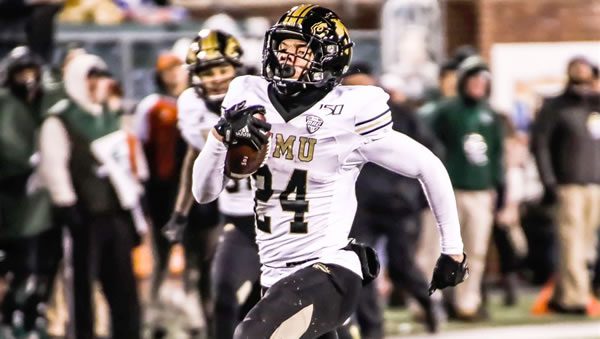 Point Spread: WMU -3.5/NIU +3.5 (Bovada - If you’re live betting games in progress and haven’t seen Bovada’s platform, we urge you to check it out. It’s so much better than the rest + they give you a 50% real cash bonus AND rebates on ALL your wagers; win, lose or draw!)

If Vegas wanted to make sure the Huskies would take this game seriously, they’ve done exactly that with this line. Northern Illinois is the MAC West champion at 6-1, while Western Michigan sits in the basement at 3-4. And yet, the Huskies are still getting points at home, in large part because NIU hasn’t looked impressive in its wins and doesn’t have to win this game in order to reach Detroit. NIU already locked up the West last week by beating Buffalo, and now the Huskies’ biggest concern is getting out of this game healthy and ready to face the winner of Miami-Kent State for the league championship.
Western Michigan is still considered a strong team in the minds of the public based on the Broncos besting likely ACC champion Pittsburgh earlier this season, but the Broncos really haven’t gotten the job done since that day. The win at Pitt was one of only two road wins all year for the Broncos, with the other coming at Buffalo back in October. Otherwise, the Broncos aren’t performing for bettors, having failed to cover in five of their past six contests. The only game where Western Michigan has looked like a quality squad was Oct. 16 against Kent State; otherwise, the Broncos are really shooting themselves in the foot with mistakes.

How the Public is Betting the Western Michigan/Northern Illinois Game

Vegas might not believe in Western Michigan, but the public does. Sixty-six percent of tickets have come in on the Huskies, which has helped the spread drop from +4 to +3.5. The total is unchanged at 63.

Here’s why Western Michigan is still getting love from Vegas: the Broncos have won the yardage battle in each of their past four games. Here’s why the Broncos are 6-5 instead of 9-2 and playing for the MAC West title: they’ve lost the turnover battle in those games by a combined 10-1 and have finished minus-2 or worse in turnovers in three of their past four games. Not surprisingly, the Broncos lost all three of those games, including one to Central Michigan, where they finished minus-3 in turnovers and gave up two punt return touchdowns to Kalil Pimpleton.

When the Broncos aren’t making mistakes, they have plenty of ways to hurt their opponents, mainly through either the arm of Kaleb Eleby or the legs of Sean Tyler. The Broncos average almost 450 yards per game and have shown no problem scoring against just about anyone other than Toledo, and the Huskies have had their problems slowing down big-play offenses. But with Western’s tendency to shoot itself in the foot, all those yards aren’t worth much unless they result in points.

As players keep going down, the Huskies keep finding someone who can get the job done. Whether it’s been Tyrice Richie getting injured at Kent State or Harrison Waylee going down in October, Northern Illinois has kept plugging in someone who’s ready to step into the job. Trayvon Rudolph has only expanded his role ever since Richie’s injury, serving as both Rocky Lombardi’s top target and a solid running option. Against Buffalo, Rudolph was the Huskies’ leading rusher because of trick plays, gaining 174 all-purpose yards for the game.
However, the rest of the running game has to be better than it was in New York. Western defends the run well, and other than Clint Ratkovich’s overtime touchdown, the Huskies didn’t get the job done on the ground last time out. Jay Ducker has been a serviceable running back for most of the season since
coming in for Waylee, but he can’t have a repeat of his performance against Buffalo if Northern Illinois is going to get a win here.

Not only does NIU tend to win this game on the field, but the Huskies tend to cash at the betting window in the process. Northern Illinois has covered in eight of 10 meetings against Western Michigan at Huskie Stadium, and the underdog has covered in five straight matchups.

The wind played a factor in NIU’s most recent game at Buffalo, and it seems the wind has followed the Huskies down I-88 from western New York to the plains of Illinois. Wind will blow at a sustained 17 miles per hour to the south, with wind gusts of 27 miles per hour possible. Temperatures will hit 33 degrees in this one.

With Northern Illinois still playing for respect and this being senior day in DeKalb, I really don’t think the Huskies are going to back off in this matchup. They’ve owned this matchup with Western, and they’d love to complete a 5-0 sweep through the West after going winless a season ago. Throw in that these teams play close games, and you want to be on the side of the points.

I don’t think I’ll need the free 3.5 points, but I will gladly take it. Give me the Huskies. Bet your Thanksgiving Day NFL picks for FREE by taking advantage of a 100% REAL CASH bonus on your first deposit of $100 to $300 at MyBookie Sportsbook! (Must use bonus code PREDICT100 when signing up).