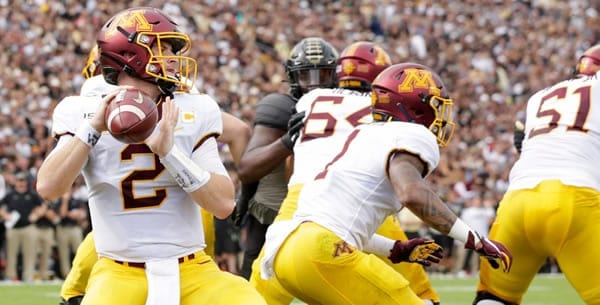 It is the final week of the College Football regular season, and that means Rivalry Week for the Big Ten. Ohio State and Michigan suck a lot of the air out of the room ahead of this week in most years, but the Big Ten West has the more intriguing matchup with the Wisconsin Badgers heading to the Twin Cities to take on the Minnesota Gophers. A trip to the conference title game is on the line - along with Paul Bunyan’s Axe - and a Minnesota win, in particular, could lead to even bigger things if the Gophers could find a way to go on and upset Ohio State in Indianapolis. This match will be the 129th meeting between these teams, making this the most played series in NCAA history. The overall record sits dead even at 60-60-8, although Wisconsin has dominated the last three decades with a 23-6 record against Minnesota since Barry Alvarez took over in 1990. College Gameday will be on site in Minneapolis for the first time to lend a little more juice to the matchup, and the weather could be a significant factor with as much as six inches of snow in the forecast. What more could you ask for?

The early week forecast is calling for a greater than 50% chance of snow during the game with some models suggesting 2-3 inches could fall after kickoff. Outside of monsoon-like rains that sometimes pop-up in the South, the weather is seldom the determining factor in a game. Saturday could be different with Minnesota relying quite heavily on the pass so far this season. If the snow, wind, and temps really work against effective passing, it will be an edge to Wisconsin, at least in terms of which team will be able to run more of its standard playbook. Minnesota is not bad on the ground, but the Badgers are averaging 251 yards on the ground with the Gophers nearly 70 yards back at 184 per contest. Tyler Johnson and Rashod Bateman are both at 1,000 receiving yards, and ten touchdowns each ahead of Saturday and Wisconsin would like nothing more if Mother Nature helped defend against the best wide receiver duo in the conference.

I’ve written over 100 Wisconsin game previews over the years, and it remains remarkable how effective this team is on the ground. We all know about Jonathan Taylor (1685/18) and his accolades, but UW is constantly coming up with rush schemes with wildcat looks coming into favor over the last few weeks. WR Aron Cruikshank and RB Garrett Groshek both scored rushing touchdowns last week after taking a shotgun snap, and both have the requisite HS quarterbacking experience to run read-option looks. Wisconsin wide receivers have over 300 rushing yards and four scores on the ground to add a further dimension to this offense, and Jack Coan has been able to complete 73% of his passes with defenses over-committed to stopping the run. The Badgers are last in the conference in passing yards per game, but play-action gains and third-down conversions tend to hurt the opposition more than the raw numbers would suggest. On the year, Wisconsin is converting 52% on third down and routinely dominates the time of possession battle at nearly 37 minutes per game.

P.J. Fleck brought his “row the boat” mantra to Minnesota, and it has paid off on both sides of the ball with the Gophers often looking like they had an outboard motor installed on that boat. Minnesota is 17th in points per game at 35.9 per contest and enters the week with the best passing game in the conference. Tanner Morgan has thrown for nearly 2,700 yards with 26 touchdowns against just five interceptions, but the run game has also held up its end. Rodney Smith has hit 1,000 yards with eight touchdowns, and Mohamed Ibrahim has chipped in another six scores. There isn’t much this team hasn’t done well in 2019, including ranking 10th in total defense and 9th in passing defense with Antoine Winfield leading the NCAA in interceptions with seven. There are playmakers up and down this roster, and this team has never really lost the momentum it gained by breaking a fourteen-game losing streak to Wisconsin in Madison last season.

It will be a crazy scene on campus this weekend with Gameday in the house and so much on the line. This is the first time since 1962, where both teams are ranked inside the top-15 ahead of the game, and there is almost no overstating how much is on the line. I think Minnesota learned a lot in their loss to Iowa two weeks ago. The Gophers fell behind 20-3 in the first half against the Hawkeyes and just found it too late in that game to make a full comeback. Getting the axe in their building was a huge moment for this program, and I think they build on that experience and make it two-in-a-row. Jonathan Taylor is the best player on the field come Saturday, but Minnesota arguably has the next three-or-four best offensive threats. Wisconsin is still solid on defense but has allowed 25.8 points per game in their last five contests with the Gophers capable of finding the same Badger weaknesses that Nebraska and Purdue were able to. The difference is that Minnesota has a much better defense than the Huskers or Boilers and shouldn’t fall into a scenario where they are giving up 30+ to Wisconsin. I think the weather will be good enough to allow Minnesota to use their passing strength, and that gives them the x-factor that Wisconsin won’t be able to match. It will be close, but Minnesota heads to Indy after a 23-21 win.

Ted’s Pick to Cover the Point Spread: Minnesota. Make the Golden Gophers a FOUR SCORE underdog (+22) by inserting them into a massive 20 point college football teaser found at 5Dimes!