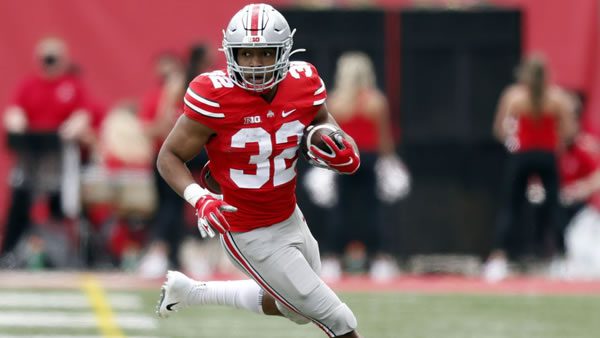 We are on the road to the Big Ten Conference Championship as conference play starts in earnest this weekend. One of the primetime matchups has the Wisconsin Badgers heading to Columbus with hopes of upsetting the #3 ranked Ohio State Buckeyes. There is a logjam at 3-0 in the Big Ten East, but the reality is that the division will likely come down to Ohio State, Michigan, and Penn State. Those teams must avoid a mistake in the early fall if they want to control their destiny and Wisconsin is potentially one of the teams from the West that could give those East powers some trouble. That said, Wisconsin does not appear to be as good as it has been in recent seasons and they are a heavy underdog on Saturday. OSU has won eight in a row against Wisconsin, a streak that extends all the way back to the 2011 season. There have been close contests since, including four one-score wins for the Buckeyes, but there have also been blowouts, including a 59-0 contest in Indianapolis. The straight-up result may not be in question, but OSU failed to cover a 17-point spread in Week 1 and couldn’t overcome a massive 44-point spread against Arkansas State in Week 2. They did get their first ATS win last week, but Wisconsin is much more like Notre Dame in terms of talent than Toledo, so the Buckeyes will have to earn it for their betting faithful.

Wisconsin has a nice 5-2 ATS record in their last seven against Big Ten foes but has faltered against better competition, going 3-10 against the spread in their last thirteen against teams with a winning record. Wisconsin is winless against the spread in their last six trips to The Shoe, and OSU has won eight of the last twelve ATS in this series. The Under has hit in five of the last seven when Wisconsin is on the road, and the Under is also 5-2 in the last seven between these teams. In the early betting, roughly 60% of the best are coming in on Ohio State’s side, with 62% of the public money on the Over. OSU scored 77 last week, and Wisconsin put up 66 so that over is understandably enticing the casual bettor but remember, this game features two defenses firmly inside the top-25 in terms of total yards allowed.

A staple of Wisconsin teams in the past 20+ years has been routinely beating the second tier of the conference, but the Badgers have struggled to get over the hump to consistently challenge Ohio State. Not isn’t necessarily a criticism, as many teams have failed to solve the OSU puzzle, but Wisconsin has had the talent to challenge on a more regular basis but just haven’t. QB Graham Mertz has improved his completion percentage to a career-high 71% through three games to give UW a hint of a passing game, but we all know the Badgers are going to run the rock. Braelon Allen has averaged 6.6 yards per carry and scored five touchdowns against some weak competition, with Chez Mellusi and Isaac Guerendo combining for four touchdowns as the change-of-pace backs. This offensive line has not been as good as some previous units. However, Wisconsin is still averaging 218 rushing yards per game, and any chance of pulling an upset or even covering this spread will rest on the O-Line’s ability to give Allen room to run. It will be a grind with Ohio State allowing just 76 rushing yards per game, but the Badgers are 0-7 when Mertz has more than 24 pass attempts in a game, so they won’t want to put the ball in his hands too often. Where the passing game fails in consistency, they make up for it in big plays with Chimere Dike averaging 19.1 yards per catch and Skyler Bell at 18.3 per reception. Clay Cundiff is second on the team in receptions and appears next in a long line of successful Badger tight ends. The Wisconsin defense lost the majority of their starters from their top-ranked defense, but Nick Herbig remains, and he leads the team with four sacks. Safety John Torchio is the veteran in an otherwise very young secondary. He turned in a 100-yard pick-six in the opener and is one of seven Badgers with an interception on the season. Wisconsin is 5th in takeaways thus far and ranks 11th in total yards allowed, but Ohio State is averaging 565 yards per game, the highest total in the nation.

The Buckeye stats have been gaudy through three games, and it starts at the top with C.J. Stroud throwing for 941 yards and 11 touchdowns. OSU is 6th in passing at 358 yards per game but also averages 207 yards on the ground, with Miyan Williams and Treveyon Henderson both averaging at least 6.5 yards per carry. Williams could be in line for more work as Henderson is currently questionable with an undisclosed injury that took him out of the Toledo game. Dallan Hayden could also work in as the #2 back, but OSU should be in good hands regardless, with that trio sitting at a combined 525 rushing yards and five scores thus far. Wisconsin does have the 13th-ranked rushing defense, but the likes of Illinois State and New Mexico State don’t offer a good analog to what OSU will bring with its ground game. Marvin Harrison Jr. and Emeka Egbuka are both north of 320 receiving yards through three contests, and they have combined to catch eight of Stroud’s eleven touchdown passes. The Badgers have been able to create turnovers in the secondary, but their corners are young and relatively inexperienced so look for these receivers to have multiple big-play opportunities. The defense appears to be the lesser of the units for OSU, but some of that is just the extreme efficiency that the offense has shown, and the Buckeyes are more than capable on that side of the ball, allowing just 14.3 points per game. The biggest trouble spot appears to be creating turnovers and tackles for loss, as they have just one interception and six sacks against some relatively soft competition.More Picks: Get Jay’s Razorbacks vs. Aggies point spread winner for Week 4

No Letdown in Columbus, Take the Buckeyes

Wisconsin has the right mindset to give OSU trouble as the Badgers will stick with the run, play disciplined defense and probably not shoot themselves in the foot but they are a few playmakers short of legitimately contending in this game. These teams haven’t met since the 2019 season, and that is actually a bit of bad timing for Wisconsin as the 2020 or 2021 defense would have given them a shot to hold down the powerful Ohio State offense. The Badgers will move the ball, but OSU should be able to mostly keep them off the board with a bend-don’t-break defensive philosophy. Wisconsin has a couple of budding receivers in Skyler Bell and Keontez Lewis, but they aren’t at a level to take over a game of this caliber, and we already stated that too much Mertz has been a bad thing for Bucky. Barring a defensive or special teams score, Wisconsin tops out at 20 points, and Ohio State gets to 41 for a somewhat close but still comfortable cover.

Pick to Cover the Spread: Ohio State. Hey! How would you like a FREE half point EVERY TIME you bet your favorite team? Plus, you’ll receive a 125% real cash bonus up to $400 when you use bonus code PREDICTEM at GTBets Sportsbook! It’s the best signup bonus offer on the web!