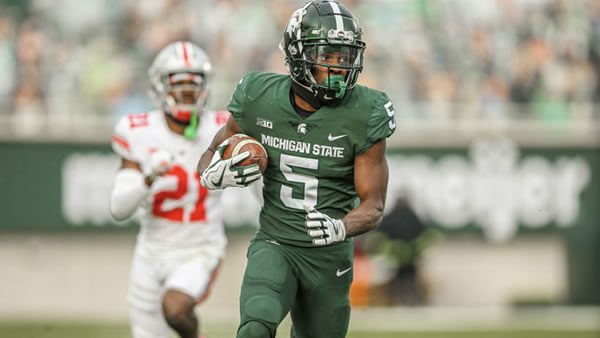 The big question in East Lansing is what the Spartans’ ground game will look like now that Kenneth Walker III has made the jump to the NFL. Michigan State had a true workhorse in Walker last year, as the back got 263 carries for 1,636 yards and averaged 6.2 yards per carry to help Michigan State’s offense cut right through its opposition. The offense might take a step back this year, which means the defense has to be better than it’s been over the past two seasons. The Spartans gave up 442 yards per game last year because teams threw all over them, which cannot happen again.

It shouldn’t happen here because Western Michigan’s offense was hit hard by graduation. The Broncos managed to upset Pittsburgh a season ago because they dropped 44 points on the Panthers, but Kaleb Eleby chose to pass on a second senior season in Kalamazoo and entered the NFL draft, leaving Western Michigan woefully inexperienced at quarterback. The job now falls to Jack Salopek, who has all of five passing attempts in his college career. The lack of experience likely turns what could have been a MAC-title worthy campaign into just a decent season for Western Michigan, and those struggles will likely be on display here in East Lansing.

How the Public is Betting the Western Michigan/Michigan State Game

The public is all-in on the Big Ten in this matchup. The line has jumped from Michigan State -18 to Michigan State -22, and 69.5 percent of tickets are on the Spartans. The total has ticked down slightly from 54.5 to 54.

The Broncos report no injuries.

The Spartans report no injuries.

If the Broncos still had Eleby under center, this game would look a lot different. However, that’s not happening, and Western instead has a lot of inexperience on the offensive side of the ball. It doesn’t help that Skyy Moore is also gone for the NFL, leaving Corey Crooms as the only real target that Western has for Salopek to find. With the Spartans bringing back all of their secondary and linebackers, that could make it challenging for Salopek to find much of anything in the air.

The good news is that Western Michigan has an excellent pair of running backs in Sean Tyler and La’Darius Jefferson. Combined, these two put up 1,900 yards a season ago, and both are equally capable of pounding through a defense and wearing out the opponent’s front seven. The problem again lies with the Michigan State defense, as the Spartans return both of their defensive tackles from a season ago and should be better against the run than they are at getting to the quarterback. There’s talent on the Western offense, but all of the Broncos’ strengths line up with the strengths of the Michigan State defense.

Unless Jarek Broussard and Jalen Berger can establish themselves on the ground, it’s going to be tough for Michigan State to match its offensive showing from a season ago. The Spartans are going to need Payton Thorne to take a step forward and expand on his connection with wideout Jayden Reed to avoid a major dropoff.

Thorne showed plenty of promise last year with 27 touchdown passes (a school record), but there’s a caveat there: Michigan State opponents were far more worried about Walker than they were about the Spartan passing attack. This year, Thorne is going to have to beat teams with his arm as a first option, not a second one. The Spartans have the talent to do it, but the offensive line and the lack of a running game might make for tough sledding in the early going. Thorne’s decision-making will have to be better this year because he won’t get anywhere near as much time to make a choice this season.

More Picks: Get our Fighting Irish vs. the Buckeyes Best Bet 9/3/22

The last time these teams played, it wasn’t a particularly close contest. Michigan State pounded Western by 51-17 in 2019, and that was a mediocre Spartan squad in Mark Dantonio’s final year. Michigan State has gone just 3-3 ATS against MAC schools over its past six matchups but has won 12 straight against the Broncos and is 2-2 ATS since 2013 against Western.

On the other hand, Western might want to stop agreeing to make the short trip east on I-94 to Lansing and Ann Arbor. Playing Michigan and Michigan State might be convenient for Tim Lester’s team in terms of gas mileage, but it sure isn’t in terms of touchdowns. Over their past three meetings with their in-state Big Ten foes, the Broncos have been outscored 147-34 and haven’t come within 31 points of either team. It’s not like this is just Western struggling against Power 5 schools, as the Broncos had respectable losses to Syracuse in 2018 and 2019 and actually beat Pittsburgh in 2021. For whatever reason, they’ve been totally unable to handle facing either Michigan or Michigan State as of late.

This should make for a fine evening of football, with temperatures dropping into the low 60s around kickoff, no precipitation in the forecast, and winds blowing at about six miles per hour to the east-northeast.

Without much experience on offense, Western Michigan will have a hard time keeping up with Michigan State or making much of a dent in the Spartan defense. The Broncos will get better as the season goes along, but this was a game really made for Kaleb Eleby to play. Because he left early to try to catch on in the NFL, Western really isn’t prepared to handle this challenge.

I think points could be at a bit of a premium here, so the line worries me a little. But I think Michigan State is going to do almost all of the scoring, and I’ll back the Spartans.