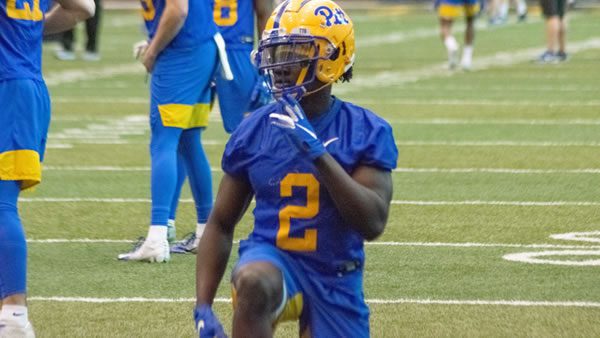 The Backyard Brawl is finally back, with West Virginia making the short trip up I-79 to Pittsburgh for a resumption of the series between these two old Big East rivals. Quite frankly, this is a rivalry that should always be played, and it’s great for college football that these two teams will finally get together for the first time since 2011 when they left the Big East for their current homes.
West Virginia is undoubtedly hoping for a return to the old days when it dominated this rivalry by winning seven of the past ten meetings. The Mountaineers really haven’t been the same since November of 2018, as they’ve gone just 17-21 since they carried a No. 7 ranking into what became a loss to Oklahoma State in Nov. 2018. West Virginia did manage to get into a bowl last season, but only just, as it finished at 6-7.
On the other hand, Pittsburgh looks to keep the momentum going after its most successful season in over a decade. The Panthers claimed their first ACC title and made an appearance in the Peach Bowl, establishing themselves as a true force in the conference. But with Kenny Pickett now using a different locker room at Acrisure Stadium (i.e., he now plays for the Pittsburgh Steelers, who share the stadium with Pitt), the offense that powered the Panthers has become a bit of a question mark. If Pitt can solve it, the Panthers should be able to handle their southern foe.

How the Public is Betting the West Virginia/Pittsburgh Game

The public is leaning toward West Virginia, as 55% of tickets are on the Mountaineers in this matchup. That’s caused the number to tick down slightly, falling under the key number of -7 to -6.5 for Pitt. The total has increased, rising from 51 to 54.5.

When you’re only getting 3.6 yards per carry, you’re going to struggle to move the ball at all. That was what West Virginia ran into last season, as the Mountaineers couldn’t get a lot going on offense. Other than a 66-0 rout of Long Island, West Virginia didn’t do much in the first half of the season, scoring 24 points or less in four of their first six games. Things got a little better in the second half of the season against lesser opponents like Texas and Kansas, but neither Jarrett Doege at quarterback nor Leddie Brown at running back was able to get the Mountaineers going on a consistent basis.
The good news for West Virginia is that the Mountaineers have five returning starters on the offensive line this year. One of them came over from Virginia Tech in right guard, Doug Nester, but the others were all starters in blue and gold, and Nester started for two years in Blacksburg. That’s key because West Virginia was 6-0 when it ran for at least 100 yards and 0-7 when it failed to run for 100 yards a season ago. This is a team that wants to run the ball and needs to open up some holes for Tony Mathis on the ground to run through.

Having Jordan Addison here would really be helpful, but Pittsburgh still has plenty of options for new quarterback Kedon Slovis to find. With Slovis now in a better situation with a solid coaching staff and an experienced offensive line, he should be able to make good decisions and move the ball on an inexperienced defense. Plus, Slovis has a pair of solid tailbacks returning in both Israel Abanikanda and Vincent Davis.
And that could be key here because Pittsburgh has been at its best only when it has gotten solid contributions from both the ground game and the pass. The Panthers struggled on the ground in both 2019 and 2020 and ended up with five losses in both seasons. Before that, the passing attack struggled with the exception of 2016, which got undone by a defense that couldn’t stop anyone. This time, Pitt should have a solid passing attack to go with its ground game, just like last year, which could make the Panthers a sneaky good team this season.

Pitt has tended to dominate in the early going, as it has won seven of its past eight home openers. However, over its past five home openers, the one that the Panthers lost was the only one where they opened against a Power 5 opponent. In the other four situations, the Panthers faced three FCS foes and Massachusetts, which doesn’t really count as an FBS team.
West Virginia, on the other hand, hasn’t been a very good bet when it comes to its road opener. The Mountaineers have dropped three straight road openers to Missouri, Oklahoma State, and Maryland, and they haven’t covered in any of them. West Virginia has won seven of the past 10 in the Backyard Brawl, but given that nobody who will be playing in this game was even in high school during the last meeting with Pitt, that won’t matter here.

This looks like it could be an excellent night for football, as temperatures will fall into the 60s and drop as low as 59 degrees. Wind will be mild in this game, blowing at six miles per hour east-northeast.

I don’t think Pitt is getting quite enough respect here. West Virginia tends to struggle when it travels away from home, and the Panthers still have an experienced quarterback even without Kenny Pickett under center. As long as Slovis can live up to the promise he showed in the first part of his career in Los Angeles, the Panthers’ offense should be fine in this situation.
West Virginia doesn’t have the defense needed to slow down Pitt, and I don’t think the Mountaineers’ offense is up to the job either in this matchup. I’ll back the Panthers. Bet Week 1 college football picks for FREE by taking advantage of a 125% real cash bonus up to $400 in free bets when you use bonus promo code PREDICTEM at GTBets Sportsbook! Note: They also give you a FREE half point on your favorite NFL, college football, NBA and college basketball bets! Sweet loyalty program too! A must have in your sports betting arsenal!