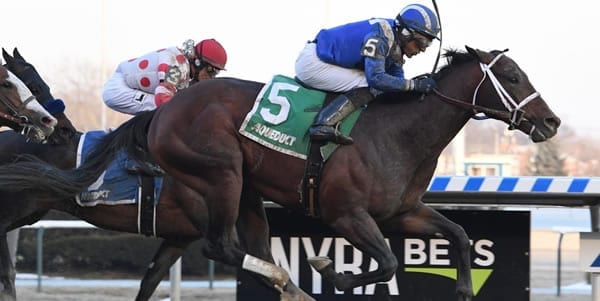 Man Oh Man! Do we love to see a horse rally like Haikal did to win the Gotham Stakes-G3 at Aqueduct on Saturday, March 9! And of course, we loved his odds too!

Sent off at 4-1 in an eight-horse field that included favored California star and Best Pal Stakes-G2 winner Instagrand, Haikal was almost 15 lengths behind a rapid pace early in the one-mile Gotham. He advanced on the turn, cut the corner into the stretch and was still five lengths behind a three-horse duel in mid-stretch. He then shifted to the outside and took off like he knew exactly where the wire was, flying by the leaders late and drawing out to win by a length over Mind Control.

Haikal’s dramatic rally was set up by early pacesetters Knicks Go and Much Better, who battled for the early lead through a quarter in 22.36. Much Better left Knicks Go behind into the turn and opened up a four-length lead, while scorching a half-mile in 44.42 that would come back to haunt him in the stretch.

Turning for home Much Better was a length in front, but after six furlongs in 1:09.23 he was caught by Mind Control on the inside and Instagrand on the outside in mid-stretch. Mind Control got his neck in front but Much Better dug in gamely, as did Instagrand. He never really did shake his outside rivals on the way to the wire, although he was clearly going to finish second, and Haikal caught them all with 50 yards to go.

Mind Control held second by a half-length over Instagrand, who gave his best to finish third, a nose in front of Much Better, despite tiring late in his first start since last August. And it would be tough to fault Much Better’s performance. He too gave everything he had when challenged after setting a blistering pace.

Ridden by Rajiv Maragh and trained by Kiaran McLaughlin for owner-breeder Shadwell Farm, Haikal got the mile in a good 1:35.63 and earned a 95 Beyer Speed Figure for his efforts. He has now won three in a row and absolutely knows where the wire is. His two wins prior to the Gotham were by a neck and when he lost his first lifetime start it was only by a neck. In all four of his career races, he has come from behind in heart-stopping style.

Haikal’s next few races, including the Kentucky Derby, will be much tougher, but it’s hard not to love a horse like this. And he has yet to be a favored. In the Gotham, he rewarded his backers with payoffs of $10.80, $4.90, $2.90 across the board.

A bay 3-year-old colt by Cigar Mile-G1 winner Daaher out of Sablah by Distorted Humor, Haikal is a half-brother to Vosburgh Stakes-G1 winner Takaful, and his Gotham Stakes win now moves him on to our Top 10 Kentucky Derby Contenders List, pushing Instagrand off the list for now.

Instagrand is certainly not out of the Derby picture. He ran an excellent race in the Gotham considering he was coming off a seven-month layoff. He also had to come from off the pace for the first time in his life. Once in the stretch duel he did not want to give up, he just ran out of air. We should get a better read on him in his next start.

Knicks Go surely has to be taken off the Road to the Derby now after three sub-par efforts in a row. Last year’s game Breeders’ Cup Juvenile runner-up had no excuse in this race. He wasn’t coming off a layoff, and he wasn’t a tired horse coming off a taxing effort. Something appears to have gone amiss with him.

Second-place finisher Mind Control proved he could come from off the pace in the Gotham, and still has a chance to improve. Much Better is looking more like he might be better off sprinting, although he was certainly game in the Gotham and was only beaten 1 ½-lengths. Fifth and sixth-place finishers Family Biz and Tikhvin Flew appear to be a notch below this bunch, and Not That Brady faded very badly to join Knicks Go in the back to the drawing board projects.

Our first pick in the Gotham, Instagrand was game in defeat but a poor bet at a short price, as we suggested, with questions to answer off the layoff. We took a shot with our second pick, Knicks Go, as he did have seemingly legitimate excuses for his previous two poor performances. In hindsight, something has gone wrong with him. Our third pick, Haikal, won, and we bet him. And our fourth pick, Mind Control, ran an exceptional race to give us a $48.00 exacta.

The Gotham indeed wasn’t as profitable for us as the Tampa Bay Derby, but our analysis was solid, and it gave us not only a profit but another exciting Kentucky Derby contender!