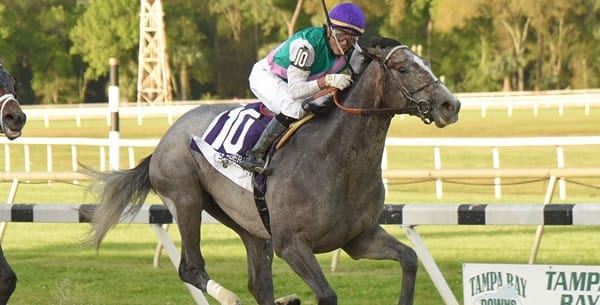 Trained by Hall of Famer Bill Mott, Tacitus tracked a fast pace from off the rail in mid pack under Jose Ortiz, and deftly sliced between horses in late turn to make his stretch run. He took over from pacesetter Zenden and outside rallier Outshine nearing the sixteenth pole and drew out late to win by 1 ¼-lengths over Outshine.

Win Win Win was wide throughout and moved at the same time as the winner, but his trip took its toll. Although he came with a steady rally, he could only get up for third, 1 ¼-lengths behind Outshine and a half-length in front of fourth-place finisher Zenden.

Zenden was sent early from post 11 and ruined any chance Well Defined might have had of wiring the field. We thought Zenden might send but were hoping he would fade as he did in his previous start. And he did run further than we thought he would after setting a sizzling pace under pressure from Well Defined.

Leading the way from the inside through fractions of 22.79 and 45.85, Zenden got the six-furlongs in 1:09.57 and turned back a bid from Well Defined on the final turn, but he never got the breather he needed. The ralliers pounced almost immediately. Zenden gave way approaching the sixteenth pole after a mile in 1:35.44 and did well to hold on for a piece of the superfecta, half a length behind Win Win Win.

Well Defined faded to finish eighth of 11, but perhaps an even bigger disappointment in the race was Dream Maker, who was bumped mildly at the start and ended up at the back of the pack early, where he looked like a fish out of water. He made a middle move but did not appear to handle the final turn all that well and faded to finish tenth. Some mental maturity required yet with this one.

On a more positive note for your horses to watch lists, Admire used an inside trip to make a decent bid to mid stretch before tiring and he looks like he’s going to be genuine tryer. If he can find a slightly easier spot for his next start, he should be tough to beat.

Sir Winston may be another horse to watch in a lesser spot, or as a superfecta include in these types of races. Stalking from back and inside, he dropped back to last on the final turn, but once into the stretch he moved outside and finished well too late. You would think he’d know what he was doing after six starts, but it didn’t appear that way. This one is still learning too.

Tacitus stopped the timer in a stakes-record 1:42.90 for the mile-and-a-sixteenth to earn a Beyer Speed Figure of 93. He also made us a profit as our best overlay so far on the Road to the Derby, when he paid an amazing $19.80, $8.20 and $4.60 across the board, topping the aforementioned exacta of $129.20 with our second wildcard pick Outshine.

Win Win Win completed a decent trifecta of $231.00 and the 10-cent superfecta paid $236.62 when Zenden held on for fourth. It was a profitable day despite the fact that our top pick didn’t work out, and Tacitus reminded us yet again why we always HAVE to bet our overlays to win and make sure they are in our exotic boxes.

Tacitus now moves on to our 2019 Kentucky Derby Picks Top 10 Contenders List for a number of reasons. Not only does he have an excellent trainer in Hall of Famer Bill Mott, but the mental maturity and toughness he showed knifing between horses in the Tampa Bay Derby will stand him well in what will likely be a crowded Kentucky Derby field. Additionally, rider Jose Ortiz is also one of the best in the business.

Tacitus also has some high-class pedigree to work with.

Owned by Juddmonte Farms Inc. the gray/roan 3-year-old colt is by Tapit, who has sired 25 Grade 1 stakes winners and who stands for $225,000. Additionally, Tacitus is the first foal out of the mare Close Hatches, who won five Grade 1 stakes, finished second in the Breeders’ Cup Distaff-G1 and earned over $2.7 million on her way to being named the 2014 Champion Older Mare in North America.