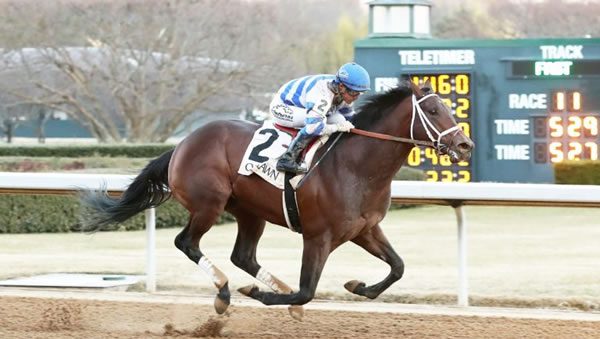 No one’s going to argue with you if you bet Newgrange in today’s $1 million Rebel Stakes (G2) at Oaklawn Park, but at 9/5 on the morning line for a trainer that is on a bad-luck streak, we’ll be looking elsewhere.

Undefeated in three starts, Newgrange is trained by Bob Baffert, who has won this race eight times. He won the Southwest Stakes (G3) over this track in his last, and he’s likely to get a good trip behind the speed here, but Baffert has been mired in bad luck and bad press over the past few years. When Medina Spirit was disqualified from winning the Kentucky Derby last week, the bad Bobby karma reached its highest point yet.

Newgrange is the horse to beat, and he will make a bid in the stretch, but we’re looking for something with a better price. Or how about a longshot?

Ethereal Road is trained by Hall of Famer D. Wayne Lukas, who has won too many Triple Crown races to count, and this horse looks like he’s on the improve. He was way back in his last after stumbling at the break and trailed the field before making a nice move on the final turn and rolling home to break his maiden by four lengths at Oaklawn Park on January 29 at today’s distance.

Ethereal Road is a half-brother to Turned Aside, who won the five 1/2-furlong Quick Call (G3) stakes at Saratoga, so he’s got some class and speed in his pedigree, and he did show a nice turn-of-foot into the turn in his last before grinding by the field in the stretch and drawing out late to win, with a little left in the tank. He’s also by Quality Road, who has sired two champions and 25 graded stakes winners.

Ethereal Road is making a big jump up in class, and he will likely need a good solid pace to run at, but at 12-1 on the morning line, we can’t resist taking a shot. Lukas hasn’t been a major player in the big races for years, but he still knows what to do with a good horse.

The speed of the race should be Kavod, who breaks from the inside post. He set the pace in the Southwest Stakes in his last before fading to finish fourth. He’ll likely be kept somewhat honest by one or more horses which could include Chasing Time, who romped in an allowance race in his last at Oaklawn Park by 7 ¾-lengths, Ben Diesel, who had a decent trip inside in the Southwest and made a bid before tiring, and Dash Attack, who might send from post 11. The latter won the Smarty Jones Stakes at Oaklawn two starts back before a rather dull effort in the Southwest Stakes. Morning-line favorite Newgrange should get a nice trip just back of the pacesetters, just as he did in his last, and make his bid somewhere in late turn. Barber Road, who finished second in the Southwest after a wide trip and a decent rally, could improve with a better trip.

New York shipper Un Ojo rallied from way back to finish second in the Withers Stakes (G3) in his last and could move forward off that race, but he would need a strong pace to set up his rally. Stellar Tap came up short in his 2022 debut on January 22 and could improve off that effort. Texas Red Hot makes his first start of 2022 but does exit a key race and is worth throwing into the lower rungs of the Trifecta and Superfecta

At what should be a great price, we’ll bet Ethereal Road to win and place and use him first and second in the exotics with Newgrange, Barber Road, Chasing Time, Ben Diesel, Stellar Tap, Un Ojo, Dash Attack, and Texas Red Hot.