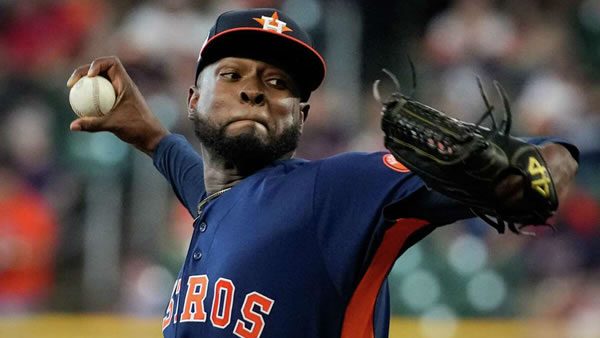 Money Line: Astros -150 / Rangers +125 (Bovada - Start betting on games live! This place has the most amazing live wagering platform on the web!)

The Texas Rangers host the Houston Astros on Wednesday, August 31st at Globe Life Field. The first pitch in this matchup is scheduled for 02:05 ET. The MLB Odds Board places Houston as the favorite (-150), with an OU line set at OFF.

Houston looks to keep things rolling after taking down Texas by the score of 4-2. On their way to the victory, the pitching staff gave up 2 runs on 7 hits. The Astros benefited from an offense that generated 4 runs on 8 hits. Heading into their last game, Houston was the betting favorite at -138.0. Through 112 games as the favorite, the team has found the win column at a rate of 67.0%. This matchup remained below the over-under line set at 7.0 runs. This outcome pushed Houston’s over-under record further below .500 at 48-76-6.

The Astros are looking to continue adding wins, as they are 3-2 over their last 5 games. Over this stretch, the team has a positive run differential at +3. Houston has put together this record, despite averaging just 2.8 runs per game, compared to their season average of 4.52. So far, Houston has won over half of their 43 series played, going 26-13-4.

In Texas’s last outing, they fell by a score of 4-2 to the Astros. Even in the loss, the pitching staff allowed just 4 runs on 8 hits. At the plate, the Rangers only came through for 2 runs on 7 hits. Leading into Texas’s loss they were the underdogs, getting 128.0 on the moneyline. So far, the team has gone into 72 games as the underdog, still finding the win column at a rate of 47.0%. Combined, the Rangers and Astros run total fell below the over-under line of 7.0 runs. Texas still has an above .500 over-under record at (63-56-9).

The Rangers come into today’s game looking to turn things around, as they are just 2-3 over their last 5 games. Even though Texas has notched just 2 in their last 5 games, they still have a positive run differential in this stretch (+1). Their recent record comes while the offense has picked up its play, averaging 7.0 runs over their last 5 game, compared to their overall figure of 4.54. Texas has a below .500 series record of just 15-21-6.

Houston will roll with Cristian Javier (7-9) as their starter. Currently, Javier has an ERA of just 2.97 while pitching an average of 4.8 innings per outing. Hits have been hard to come by against the right-hander, as his batting average allowed is just 0.181. Home runs have been a concern for Javier as he is allowing 1.17 per 9 innings. On the season, Cristian Javier has had no problem racking up strikeouts, posting a strikeout percentage of 32.0%. This includes a per-game average of 6.25 K’s per game. In his previous outings, walks have been an issue, as Javier is averaging 3.2 free passes per outing.

In today’s game, Texas turns to starter Martín Pérez. For the year, he has a record of 10-4. Currently, Pérez has a strong ERA of just 2.69 while pitching an average of 6.16 innings per outing. This season opponents are hitting 0.229 against Pérez. So far, Pérez has managed to keep the ball in the ballpark, allowing just 0.64 home runs per 9 innings. Overall, Martín Pérez has struck out 22.0% of the batters he has faced. On average, he averages 5.56 K’s per game. Command has been a problem for Pérez, as he is giving up 2.92 walks per outing.

Today’s matchup between the Houston Astros and Texas Rangers will be their 16th meeting of the season. Houston has the lead in the series at 11-4. Through 15 games, the series over-under record is 4-11, with the average run total sitting at 9.84 runs per game. In these matchups, the average scoring differential sits at 2.87 runs. Last season, Houston picked up the series win, 14 games to 5. In these 19 meetings, the two teams combined for an over-under record of 11-5. Last year, the Astros and Rangers averaged 9.84 runs per game. On average, the winning team won by a margin of 4.58 runs per contest.

More Picks: Get our Cards vs. Reds Runline Pick for their 8/31/22 game

Heading into Wednesday’s matchup between Houston and Texas, the Astros are the favorite on the moneyline. Even though Martin Perez has been just as effective as Cristian Javier all season long, the Astros starter is backed by a much better offensive unit. The last time around vs Houston, Perez was tagged for 7 runs across 5 innings. I like Houston on the moneyline.

Free MLB Pick: Astros Moneyline. Bet your MLB predictions for FREE this week by taking advantage of a 100% real cash bonus up to $500 when you use bonus promo code PREDICTEM at Betnow Sportsbook!