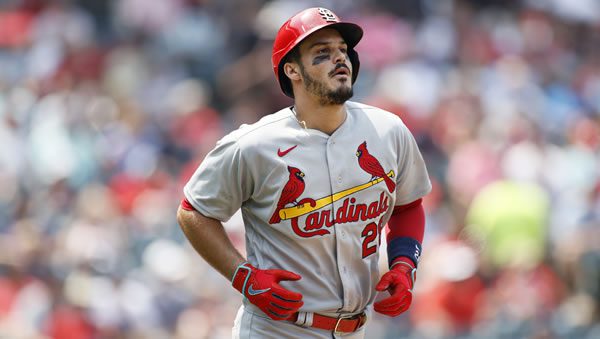 The Cincinnati Reds host the St. Louis Cardinals on Wednesday August 31st at Great American Ball Park. The first pitch in this matchup is scheduled for 06:40 ET. The MLB Odds Board places St. Louis as the favorite (-230), with an OU line set at 9.5.

The Cardinals are hoping to get back on track after falling to Cincinnati by a score of 5-1. St. Louis’s pitching staff finished the game by allowing 11 hits, leading to 5 runs. The Cardinals ended the game with just 1 run on 4 hits. Cardinals suffered the loss, despite being favored at -230.0. Through 82 games as the favorite, the team has found the win column at a rate of 70.0%. Combined, the Cardinals and Cincinnati fell short of the over-under betting line of 10.5 runs. With this result, St. Louis’s over-under record dropped back to .500 63-63-4.

In the Cardinals last 5 games, they are above .500, going 3-2. During this time, they have an average scoring differential of +2. Their hot play has been driven by an offense that typically averages 4.92 runs per game. But, over this stretch this figure has bumped up to 6.0 So far, St. Louis has won over half of their 40 series played, going 21-10-9.

In their last game, the Cincinnati Reds picked up a 4 run win over the Cardinals by a score of 5-1. For the game, the pitching staff held the Cardinals to 1 run on 4 hits. At the plate, the Reds scored 5 times on 11 hits. This was a good win for the Reds, as they were underdogs at 190.0 on the moneyline. In their 97 games as the underdog, their straight-up win percentage sits at 40.0%. Combined, the Reds and Cardinals’ run total fell below the over-under line of 10.5 runs. Even still, Cincinnati games have still gone over the betting total over half of the time, at 65-61-2.

In their last 5 games, the Reds have put together a record of 3-2. Their recent success is backed by an average scoring margin of +2 (last 5). Cincinnati is still playing winning baseball, even with their offense averaging just 4.8 runs per game, compared to a season-long mark of 4.26. Cincinnati has a below .500 series record of just 13-20-8.

José Quintana gets the start for the Cardinals, with an overall record of 3-5. Currently, Quintana has an ERA of just 3.32 while pitching an average of 5.15 innings per outing. Across his previous starts, opposing teams have put together a batting average of 0.248. Opposing batters are hitting for power at a below average rate against Quintana, as he is allowing just 0.61 per 9 innings. In terms of strikeouts, José Quintana has a strong strikeout percentage of 21.0%, including a per game average of 4.45. In his previous outings, walks have been an issue, as Quintana is averaging 2.71 free passes per outing.

Cincinnati will roll with Mike Minor (3-10) as their starter. To date, Minor has an ERA of 6.10 while lasting an average of 5.28 innings per appearance. Compared to other starters, the right-hander has a high BA allowed of 0.287. Home runs have been an issue for Minor, as he is allowing an average of 2.16 per 9 innings pitched. Overall, Mike Minor has struck out 18.0% of the batters he has faced. On average, he averages 4.4 K’s per game. Minor comes into the game hoping to improve his walk numbers, as he is averaging 3.28 free passes per outing.

For the season, the St. Louis Cardinals and Cincinnati Reds will be playing their 14th game of the season. So far, St. Louis is leading the season series, 8-5. The over-under record in this series sits at 6-7. The average run total in these games is 9.53 runs per game. In these matchups, the average scoring differential sits at 3.77 runs. Cincinnati won last year’s head-to-head series, grabbing 10 wins to 9. The over-under record in last year’s matchups was 11-7, with the average run total being 9.53 runs per game. The average scoring differential in this series was 3.11 runs per game.

Heading into Wednesday’s NL Central showdown between St. Louis and Cincinnati, the Cardinals are the heavy favorite on the moneyline. Even though the Reds were able to come away with an upset in last night’s matchup, I expect St. Louis’ offense to break out, making the best bet for today’s game being the Cardinals on the runline.