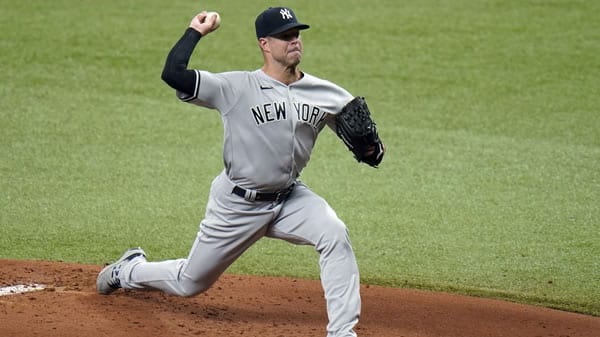 Here’s something baseball fans aren’t used to seeing: the Yankees with one of the weakest offenses in the majors. New York is well known for producing a lot of runs, but the Yankees have only managed 58 runs in 16 games this year, less than four per game. Only the Cubs and Giants have proven more inefficient at crossing the plate, and the Yankees aren’t exactly a powerhouse pitching squad on days when Gerrit Cole doesn’t pitch.

Yet the pitching is about all that’s keeping the Yankees in games so far this season, as savvy gamblers have been able to bet under 10 runs on Yankees games this year and cash on 14 out of 16 contests. Other than two outbursts at Tropicana Field against the Rays, there hasn’t been more than 10 runs scored in a game involving the Yankees, even when New York does hit. Lately, the Yankees haven’t hit other than DJ LeMahieu, who’s the only New York hitter at .300 right now. That’s not getting it done, and it’s shown in the fact that the Yankees have scored less than four runs in six of their past seven contests.

You would think that leading the majors in home runs would have your team toward the top of the standings and competing for the best record in your league. And you would be absolutely wrong, as the Braves sit at a mediocre 7-10 and are lucky that it isn’t worse. It’s only because the Mets had multiple games cancelled and the Phillies are inconsistent that Atlanta is still within shouting distance of the division right now.

So why have the Braves been a wreck? Because much like the Yankees, Atlanta’s biggest strength has become its biggest weakness. The Braves’ pitching was supposed to be stellar after adding Charlie Morton, and it was only supposed to get better when Mike Soroka returned to complement Max Fried and Ian Anderson. But Soroka still isn’t throwing after pausing for a shoulder injury, and Fried’s ERA is currently four digits. Anderson’s the only returning starter from 2020 who still looks like the player he was last year, which is why the Braves have given up 86 runs in 17 games. If the pitching doesn’t pick itself up in a hurry, Atlanta’s going to have a hard time getting out of the grave it’s dug.

There is no other way to say it: both of these teams have greatly disappointed this season. Atlanta was supposed to be a real World Series contender this year, and the Yankees are always World Series or bust. Yet after the first three weeks of April, both teams find themselves under .500. If you could have placed a bet on Opening Day that we’d get to this point and the Braves would have the same number of wins as the not-even-trying Pirates and the Yankees would have as many wins as the also-not-trying Tigers, you probably could have become a millionaire. At some point, these teams will probably start to figure this out and play to their potential. But until the wins start coming, each team is going to be dealing with the pressures that come when you haven’t won a title in several years and your fans expect a championship. (Ask the Dodgers about that one.) Atlanta hasn’t claimed the title since 1995 and New York hasn’t won the World Series since 2009, which is officially the longest drought in the Yankees’ glorious history. It might be a little easier to brush things off this year with very few fans in the stands, but the weight of expectations can really weigh on a team that isn’t prepared to handle them. Betting Trends

The ball could be flying out of the park here, as the wind is blowing 17 miles per hour heading west-northwest, also known as straight in the direction of the short porch in right field at Yankee Stadium. The temperature could work against that, though, as it’ll be just 52 degrees.

There’s one thing that we haven’t discussed about this matchup: Yankees starter Corey Kluber. Kluber hasn’t come back the same pitcher that he was in Cleveland, and in two starts for the Yankees, he’s failed to make it past the fourth inning in either start. Against Tampa Bay, Kluber was a mess, giving up five runs in 2.1 innings and taking a 10-5 loss.

I can’t see him being much better against the Braves with the wind blowing out to right field, and Anderson’s actually pitching fairly well at the moment. I’m going with the Braves as the underdog.