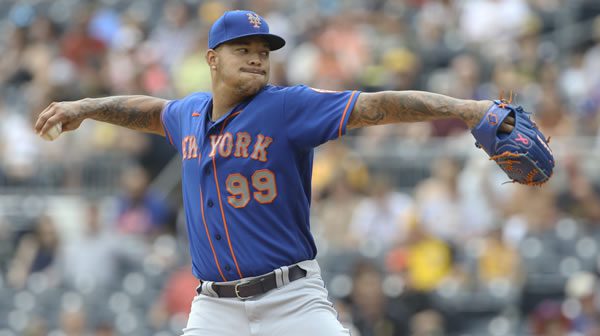 The Los Angeles Dodgers host the New York Mets on Thursday, June 2nd at Dodger Stadium. The first pitch in this matchup is scheduled for 10:10 ET. The MLB Odds Board places Los Angeles as the favorite (-160), with an OU line set at 8.5.

In New York’s last game vs the Nationals, the Mets came away with a 5-0 win. Overall, the team’s pitching staff limited the Nationals to 0 runs on 6 hits. The Mets benefited from an offense that generated 5 runs on 8 hits. Heading into their last game, New York was the betting favorite, at -240.0. So far, the team has been the favorite in 45 of their games, winning at a rate of 69.0%. Together, the Mets and Nationals stayed below the over-under line set at 9.0 runs. Even after this game, New York’s overall over-under record sits at 27-22-3.

The Mets will look to continue their strong play, as they are 5-0 over their last five contests. Over this stretch, the team has a positive run differential at +30. A key to their recent success has been an offense averaging 8.2 runs per game, compared to their season average at 5.21. So far, New York has won over half of their 16 series played, going 13-2-1.

Los Angeles will look to move on from a 4 runs loss to Pirates, falling by the score of 8-4. On their way to giving up 8 runs, the Dodgers staff allowed 9 hits. The Dodgers offense ended the game with just 4 runs on 12 hits. Los Angeles came away with a loss, despite being favored on the moneyline (-280.0). For the season, the team has been favored in 49 games, winning at a rate of 65.0%. In terms of the over-under, the Dodgers and Pirates combined to surpass the line of 9.0 runs. Against the run total, Los Angeles is just 23-25-2.

The Dodgers come into today’s game looking to turn things around, as they are just 2-3 over their last 5 games. During this time, the team has a run differential of -4. If Los Angeles is going to pick up their play, they need to improve their offensive performance. Over their last 5 contests, they are averaging just 3.6 runs per game, compared to a season average of 5.48. On the season, Los Angeles has won more than half of their series, going 11-5-0.

The New York Mets will send Taijuan Walker to the mound with an overall record of 3-0. In his previous outings, Walker is lasting an average of 5.0 innings, putting together an ERA of just 2.83. Across his previous appearances, the right-hander has a batting average allowed of 0.242. Opposing batters are hitting for power at a below-average rate against Walker, as he is allowing just 0.51 per 9 innings. Walker is in the bottom half of the league in strikeouts, averaging just 2.71 K’s per game. This includes a strikeout percentage of 13.0%. Leading into the game, he has shown a strong command of his pitches, averaging just 3.09 walks per contest.

Los Angeles will roll with Tony Gonsolin (5-0) as their starter. Through 9 appearances, Gonsolin has an ERA of just 1.8 while averaging 5.0 innings per appearance. So far, batters are hitting just 0.167 against him. Not only does Gonsolin have a strong batting average allowed, but he has also avoided giving up home runs. In his previous outings, opponents are averaging just 0.6 home runs allowed per 9 innings. Overall, he is averaging 4.89 per game, on a K rate of 25.0%. Throughout the season, Gonsolin has avoided walking batters, allowing just 3.2 per contest.

Today’s game between the New York Mets and Los Angeles Dodgers is their first matchup of the year. Dating back to last season, the Los Angeles picked up 6 wins compared to 1, taking the season series. In these 7 meetings, the two teams combined for an over-under record of 3-4, with the average scoring differential sitting at 3.14 runs. Between the games, the average run total was 8.29 runs per game.

Heading into a heavyweight matchup between New York and Los Angeles, the Dodgers are the betting favorites on the moneyline. This comes despite LA being swept in their last series vs Pittsburgh. On the other side, the Mets have picked up 6 straight wins. Look for Taijuan Walker to continue his strong 2022 campaign as the Mets make it 7 in a row.

Free MLB Pick: Mets Moneyline. Bet your Mets vs. Dodgers prediction and ALL your baseball bets for FREE this week by taking advantage of a 100% real cash bonus on your first deposit of up to $500 when you use bonus code PREDICTEM at Betnow Sportsbook!