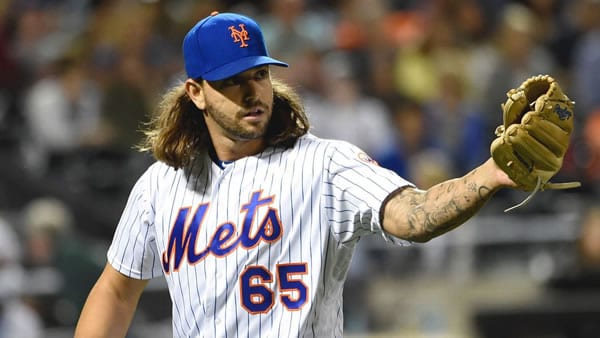 The Yankees and Mets conclude their season Subway Series with a makeup game Thursday afternoon in Queens. The Yankees are trying to recover following a recent slide while the Mets are trying to stay alive in the National League playoff race. How are we playing this game with our free MLB pick?

Thursday’s MLB betting odds opened the Yankees and Happ at around -115 over the Mets and Gsellman, with an over/under of nine runs.

The Yankees just dropped two of three games at home to Tampa Bay, losing Wednesday’s series rubber match 5-2. But just before that, they took the last three games of a four-game series with these Mets. So the Yanks are 4-2 over their last six games, although that “run” follows a seven-game losing skid.

At 20-15 overall, the Yankees sit in second place in the AL East, 4.5 games behind the first-place Rays but a game ahead of third-place Toronto. And second place makes the playoffs this season.

Meanwhile, the Mets just split two games in Baltimore, avoiding the sweep and snapping a five-game losing skid with a 9-4 victory Wednesday. But before that five-game slide, the Mets won seven of nine games.

At 16-21 overall, the Mets trail first-place Atlanta by 6.5 games in the NL East, but they’re also only two games behind Colorado in the scrum for the eighth and final National League playoff spot.

The Yankees lead this season series three games to two.

This pitching match-up is a rematch of a game played last Saturday at Yankee Stadium, a 2-1 Yankees win.

Gsellman is 0/3 on quality starts this season, basically serving as an “opener” so far. Last Saturday, he held these Yankees to one run and four hits through four innings, with four strikeouts against zero walks. But in his two outings previous to that, he gave up four runs and seven hits through just 3 2/3 innings.

The Mets are 2-1 in Gsellman’s starts this year, with the overs going 2-1.

Over seven career appearances against the Yankees, Gsellman has allowed just three earned runs and 11 hits through 16 1/3 innings.

The Yankees are 3-1 with Happ this year, with the totals splitting 2-2.

Over his last two starts against the Mets, one in 2018 while still with Toronto and last Saturday, Happ has allowed zero runs and just five hits through 14 1/3 innings, with zero walks and 15 whiffs. His teams won both those games.

The Yankees are batting .250 against right-handed batting this season, with a .342 team OBP and a .458 team slugging percentage. But this lineup, missing several key cogs, has also been held to three runs or less eight times over its last 13 games.

The Yankees bullpen owns a 4.14 ERA this season and a 1.26 WHIP. This unit was also bolstered recently by the returns of closer Aroldis Chapman and Zack Britton.

First glance might give Happ the edge in the pitching match-up, but it’s close. Also, the Yankees might own the better offensive numbers, but they’re missing three key sticks. Honestly, we don’t know who’s going to win this game. But we do like these two starters’ track records against these opponents, and neither of these teams is scoring runs in bunches as of late. So in thinking runs might be rare, we’re taking the under on the total for our free MLB pick for Thursday. Bet your MLB picks FREE this week by taking advantage of the best sportsbook bonus on the web —> Deposit $300 and get $300 FREE at MyBookie! This is a REAL CASH bonus! You must be new to their site, sign up through this special link and make sure bonus/promo code PREDICT100 is in the promo code box.