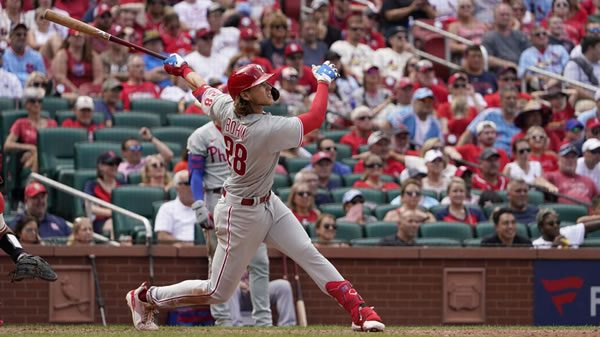 The Philadelphia Phillies host the Atlanta Braves on Tuesday, July 26th at Citizens Bank Park. The first pitch in this matchup is scheduled for 07:05 ET. The MLB Odds Board places Atlanta as the favorite (-135), with an OU line set at 8.0.

Atlanta heads into today’s action, looking to rebound from a 6-4 loss to the Phillies. In the loss, Atlanta’s pitchers gave up 6 runs on 12 hits. Offensively, they finished with just 4 runs on 8 hits. This defeat came despite being favored at -178.0. Through 84 games as the favorite, the team has found the win column at a rate of 65.0%. Together, the Braves and Phillies combined to surpass the over-under betting line set at 8.5 runs. Atlanta now has an over-under record of 50-45-3.

In their last 5 games, the Braves are below .500, at 2-3. In this rough stretch of games, the team’s run differential comes in at -2. During this stretch, the offense is averaging 4.6 runs per game, similar to their season-long average of 4.76. So far, Atlanta has won over half of their 31 series played, going 15-11-5.

Philadelphia is coming off a 2-run win over the Braves (6-4). In the winning effort, the team’s pitchers held the Braves to 4 runs and 8 hits. Offensively, they finished with 6 runs on 12 hits. Despite being the underdogs, getting 146.0 on the moneyline, the Phillies still picked up the win. So far, the team has gone into 33 games as the underdog, still finding the win column at a rate of 48.0%. In terms of the over-under, the Phillies and Braves combined to surpass the line of 8.5 runs. Overall, the team has gone over the betting line in over half of their games, going 50-44-2.

In their last 5 contests, the Phillies have just 2 wins, going 2-3. During this time, the team has a run differential of -12. The team’s offense is partly to blame for their recent slump, as they have averaged just 3.4 runs over their last 5 game. Philadelphia has a below .500 series record of just 14-15-2.

The Atlanta Braves will send Spencer Strider to the mound with an overall record of 4-3. Through 21 appearances, Strider has an ERA of just 3.27 while averaging 3.53 innings per appearance. So far, batters are hitting just 0.18 against him. In addition, to his strong BA allowed, he has been able to limit power, allowing just 0.49 home runs allowed per 9 innings. On the season, Spencer Strider has had no problem racking up strikeouts, posting a strikeout percentage of 38.0%. This includes a per game average of 5.43 K’s per game. Command has been a problem for Strider, as he is giving up 3.63 walks per outing.

Aaron Nola gets the start for the Phillies, with an overall record of 6-7. Heading into the game, Nola has appeared in 19 contests, posting an ERA of just 3.13. On average, he pitches 6.64 innings per appearance. Overall, opponents have a batting average of just 0.211 against the right-hander. Per 9 innings pitched, Nola is giving up 0.93 home runs. On the season, Aaron Nola has had no problem racking up strikeouts, posting a strikeout percentage of 28%. This has led to an average of 7.21 K’s per game. Nola has done a good job at limiting walks, averaging just 1.14 per contest.

For the season, the Atlanta Braves and Philadelphia Phillies will be playing their 9th game of the season. Today’s game will be a rubber match for the two teams, as Atlanta and Philadelphia each have 4 wins. The over-under record in this series sits at 6-2. The average run total in these games is 8.37 runs per game. The averge scoring margin in these meetings is 3.62 runs. Last season, Atlanta picked up the series win, 10 games to 9. In these 19 meetings, the two teams combined for an over-under record of 9-10. Last year, the Braves and Phillies averaged 8.37 runs per game. On average, the winning team won by a margin of 3.53 runs per contest.

Heading into Tuesday’s National League East matchup between Atlanta and Philadelphia, the Braves are the slight favorite on the moneyline. However, I see the best bet coming on the over-under, as runs should be hard to come by. Even though Spencer Strider is coming off a rough outing, he still has a WHIP of just 1.05 and is capable of locking down opposing teams. I recommend taking the under.

Free MLB Pick: Under 8 Runs. Note: We’ve arranged for our readers to receive a special deal where you can get a 125% REAL CASH bonus on your first deposit! The max deposit for this offer is $400 in which you’ll receive a $500 cash credit to your betting account when you use bonus code PREDICTEM at GTBets Sportsbook! It’s the best bonus you’ll ever find!