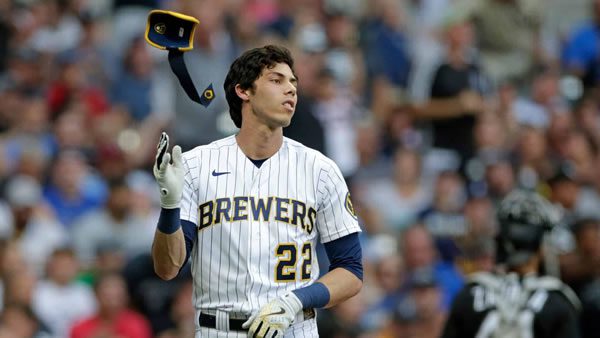 The St. Louis Cardinals host the Milwaukee Brewers on Thursday, May 26th at Busch Stadium. The first pitch in this matchup is scheduled for 07:45 ET. The MLB Odds Board places St. Louis as the favorite (-125), with an OU line set at 7.5.

In the Milwaukee Brewers’ last game, they picked up a 2-1 win over the San Diego. On their way to the victory, the pitching staff gave up 1 run on 5 hits. The team was able to pick up the win despite scoring just 2 runs on their 4 hits. Milwaukee picked up the win, despite getting 124.0 on the moneyline. Combined, the Brewers and San Diego fell short of the over-under betting line of 7.5 runs. This outcome pushed Milwaukee’s over-under record further below .500 at 19-22-3.

The Brewers come into this game with a 3-2 record in their last 5 contests. During this time, they have an average scoring differential of 1. Milwaukee has put together this record, despite averaging just 3.0 runs per game, compared to their season average of 4.57. So far, Milwaukee has won over half of their 15 series played, going 10-4-1.

St. Louis is coming off a 7 run loss to Blue Jays. Dropping the game 8-1. On their way to giving up 8 runs, the Cardinals staff allowed 12 hits. The Cardinals’ offense ended the game with just 1 run on 6 hits. This loss came as no surprise, as St. Louis came into the game as the underdog, getting 126.0. So far, the team has gone into 19 games as the underdog, still finding the win column at a rate of 42.0%. In terms of the over-under, the Cardinals and Blue Jays combined to surpass the line of 7.0 runs. For the season, the team’s over-under record is (22-19-2).

In their last 5 games, the Cardinals have put together a record of 4-1. During this time, the team’s run differential sits at 14. The Cardinals’ offense has elevated their play over their last 5 games, averaging 7.2 runs per game, compared to their season average of 4.84. On the season, St. Louis has won more than half of their series, going 7-3-4.

The Milwaukee Brewers will send Eric Lauer to the mound with an overall record of 4-1. In his previous outings, Lauer is lasting an average of 5.89 innings, putting together an ERA of just 2.16. Hits have been hard to come by against the left-hander, as his batting average allowed is just 0.203. Home runs have been a concern for Lauer as he is allowing 1.53 per 9 innings. In terms of strikeouts, Eric Lauer has a strong strikeout percentage of 33.0%, including a per game average of 7.71. Throughout the season, Lauer has avoided walking batters, allowing just 1.73 per contest.

St. Louis will roll with Adam Wainwright (5-3) as their starter. Currently, Wainwright has a strong ERA of just 2.87 while pitching an average of 5.88 innings per outing. In his previous outings, right-hander opponents are hitting 0.224 off the right-hander. Opposing batters are hitting for power at a below-average rate against Wainwright, as he is allowing just 0.77 per 9 innings. Wainwright is in the bottom half of the league in strikeouts, averaging just 4.5 K’s per game. This includes a strikeout percentage of 19.0%. For the season, he has struggled with command averaging 3.45 walks per outing.

Today’s matchup between the Milwaukee Brewers and St. Louis Cardinals will be their 4th meeting of the season. So far, the teams have each won 2 times. Through 4 games, the series’ over-under record is 2-2, with the average run total sitting at 8.21 runs per game. In these matchups, the average scoring differential sits at 3.75 runs. St. Louis won last year’s head-to-head series grabbing 11 wins to 8. In these 19 meetings, the two teams combined for an over-under record of 9-9-1. Last year, the Brewers and Cardinals averaged 8.21 runs per game. On average, the winning team won by a margin of 3.68 runs per contest.

More Picks: Get our Jays at Angels Thursday Night Pick >>>

In Thursday’s NL Central showdown between the Brewers and Cardinals, I recommend taking the under at 7.5 runs. Even though Milwaukee has respectable stats at the plate, they have struggled against the league’s top-end pitching. With Adam Wainwright on the mound for St. Louis, I don’t expect much out of the Brewers’ offense.

Free MLB Pick: Under 7.5 Runs. Bet your MLB picks for FREE this week by taking advantage of a 100% REAL CASH bonus on your first deposit of $100 to $300 at MyBookie Sportsbook! (Must use bonus code PREDICT100). Already have an account there but still want a 100% bonus? We’ve got a special deal where you can deposit $100 to $500 and get a 100% REAL CASH bonus at Betnow Sportsbook as well! (Must use bonus code PREDICTEM).