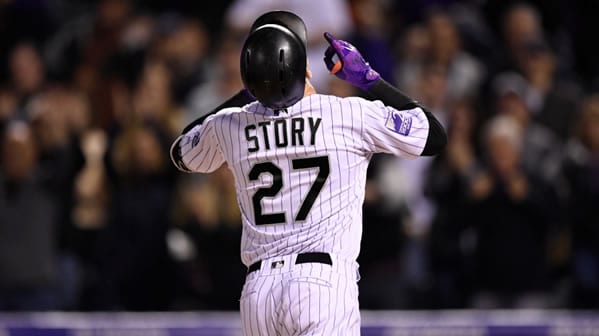 Two teams struggling to stay alive in the National League playoff picture meet when the Rockies and Diamondbacks begin a four-game NL West series Monday night in Phoenix. Both these teams started well enough this season, but both now own considerable losing skids. How are we playing this game with our free MLB pick?

Monday’s MLB betting odds opened Arizona and Kelly at around -160 over Colorado and Castellani, with an over/under of 9.5 runs. Both those figures were holding steady in the early betting action.

Colorado just got swept three games by the Dodgers in Los Angeles over the weekend, losing Sunday’s series finale 11-3. Just before that, the Rockies got swept four games by Houston. So following a nice beginning to this season, Colorado lugs a seven-game losing skid into Monday.

Arizona, meanwhile, isn’t faring any better as of late. The Diamondbacks just got swept three games by the Giants in San Francisco, losing Sunday 6-1. And just before that, they lost the last two games of a series against Oakland. So Arizona owns a five-game losing skid, heading into Monday.

At 13-15 and 13-16 overall, respectively, the Rockies and Diamondbacks trail the division-leading Dodgers by eight and 8.5 games in the NL West. However, Colorado also clings to the No. 8 spot in the National League, which is good for a playoff berth this season, with Arizona only a half-game back.

This series is the second meeting between these teams this season; two weeks ago, the D’Backs took two of three high-scoring games from the Rockies in Denver.

Kelly is 4/5 on quality starts this season. Last Wednesday, he allowed four runs and five hits through five innings of a 4-1 Arizona loss to Oakland. But just before that, he tossed 6 2/3 shutout innings in a 5-1 D’Backs victory over San Diego.

On the season, Kelly has allowed nine runs and 26 hits through 31 1/3 innings, with five walks and 24 strikeouts. Arizona is 3-2 with Kelly, with the unders going a perfect 5-0.

However, over three starts against Colorado last year, Kelly got bopped for 16 runs – 15 earned – and 24 hits through 17 2/3 innings. The Diamondbacks lost two of those three games.

Rookie righty Castellani is 0/3 on quality starts this year, in part due to a short leash. Last Wednesday, he got nicked for five runs and eight hits, including a couple of homers, through 5 2/3 innings of a 13-6 Rockies loss to Houston. But over his two previous starts, he allowed just one run and two hits through 8 2/3 innings against Seattle and Texas.

So on the season, Castellani has allowed six runs and ten hits through 14 1/3 innings, with four walks and 11 strikeouts. Colorado is 1-2 with Castellani, with unders going 2-1.

This will be Castellani’s first-ever action against Arizona, which could give him an edge early, as it apparently did against the Mariners and Rangers.

Colorado is batting .251 against right-handed pitching this season, with a .313 team OBP and a .423 team slugging percentage. The Rockies have also been held to three runs or less five times over their last seven games.

Arizona is batting .249/.320/.391 against RH pitching this season. The Diamondbacks have also scored a total of just six runs over their last five games.

Arizona might own the edge in the pitching match-up, but Colorado hit Kelly hard last year. The Diamondbacks might also hold the advantage with the good home record and the better record against RH starters, but it’s not enough to warrant a price so high. Betting baseball is all about betting value, and the value here resides with the Rockies.