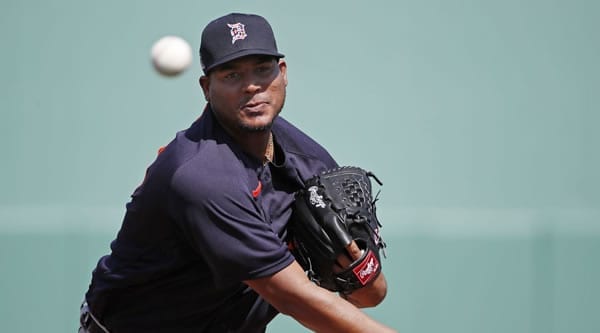 The Detroit Tigers are above .500, heading into the middle game of this three-game interleague series in Pittsburgh Saturday afternoon. Not too much was expected out of the Motor City Kitties this season, and yet if the playoffs started today, they’d be in. How are we playing Saturday’s contest with our free MLB pick?

Saturday’s MLB betting odds opened Pittsburgh at around -115 over Detroit with an over/under 9.5 runs. Early betting action then bumped the Pirates about a dime, to around -125.

Detroit took the opener of this series Friday night 17-13 in 11 innings. The Tigers scored six runs in the seventh inning Friday to take a 12-7 lead, but the Detroit bullpen allowed Pittsburgh to score two runs in the eighth and three with two outs in the ninth to force extra frames. Both teams then scored a run in the tenth, before the Tigers pulled away with four in the top of the 11th for the victory.

Detroit won Friday as a -110 favorite on the MLB betting odds, and the game played over its total of 8.5 runs in the fifth inning.

Friday’s game was Detroit’s first action in five days, after its four-game series with St. Louis scheduled for earlier this week was postponed due to some C-19 tests on the Cardinals.

The Pirates, meanwhile, suffered their eighth loss in their last nine games.

At 6-5, the Tigers trail division-leading Minnesota by 2.5 games in the AL Central.

Detroit is playing against a wins over/under of 22 for this season. So with six wins already, the Tigers only need 17 more victories over their last 49 games to play over their total.

Pittsburgh is playing against a wins O/U of 25.5.

Lefty Holland is 0/2 on quality starts this season, but he’s been a little better than that ratio might indicate. In his season debut back on July 28, he limited Milwaukee to two runs and two hits through 5 2/3 innings – one out short of a QS – in a game Pittsburgh eventually won 8-6. Then Monday against Minnesota, he took a shutout into the sixth inning but gave up four runs in a game the Pirates eventually lost 5-4.

So on the season, Holland’s allowed six runs on six hits and five walks over 11 1/3 innings, and Pittsburgh is 1-1 with him.

This will be Holland’s first start against Detroit since 2017 when he was with the White Sox, and that’s already a long time ago.

Former Pirate Nova is also 0/2 on quality starts this year. In his season debut two weeks ago, he gave up three runs and three hits, including a couple of homers, through five innings of a 6-4 Tigers victory over Cincinnati. Nine days ago, he held Kansas City to two runs and eight hits through 5 2/3 innings, although Detroit lost that game 5-3 when the bullpen gave up three late runs.

This will be Nova’s first-ever start against Pittsburgh, which could give him an edge, at least for the first couple of times through the lineup.

Detroit is batting .270 against left-handed pitching this season, with a .338 team OBP and a .460 team slugging percentage.

Pittsburgh is batting an ML-low .171 vs. right-handed pitching this season, with a .225 team OBP and a .283 team slugging percentage.

We’re giving Nova the edge in the pitching match-up, and Detroit owns the check-mark in the splits with the sticks. So we like the Tigers here getting the underdog price.