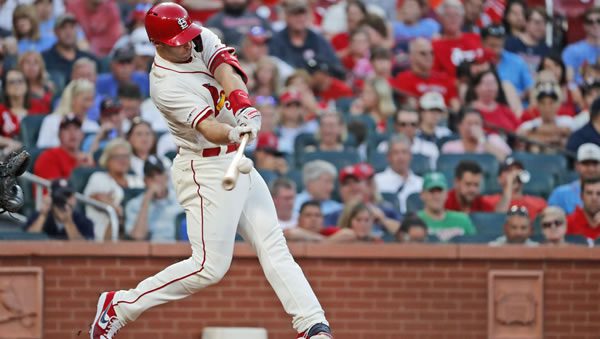 (Find the best sportsbook for your betting style: 100% bonus for small bettors or -105 reduced juice for bigger bettors!)

The St. Louis Cardinals host the San Francisco Giants on Sunday, May 15th at Busch Stadium. The first pitch in this matchup is scheduled for 07:08 ET. The MLB Odds Board places San Francisco as the favorite (-135), with an OU line set at 7.0.

The Giants are hoping to get back on track after falling to St. Louis, 4-0. In the loss, San Francisco’s pitchers gave up 4 runs on 9 hits. Offensively, they finished with just 0 runs on 8 hits. This defeat came despite being favored at -125.0. Through 27 games as the favorite, the team has found the win column at a rate of 70.0%. Combined, the Giants and St. Louis fell short of the over-under betting line of 9.0 runs. However, for the season, San Francisco still has an overall over-under record of (17-15-1).

The Giants are looking to continue adding wins, as they are 4-1 over their last 5 games. During this time, they have an average scoring differential 18. Their hot play has been driven by an offense that typically averages 4.94 runs per game. But, over this stretch, this figure has bumped up to 6.4. So far, San Francisco has won over half of their 12 series played, going 6-3-3.

In their last game, the St. Louis Cardinals picked up a 4 run win over Giants by a score of 4-0. In the winning effort, the team’s pitchers held the Giants to 0 runs and 8 hits. With their 9 hits, the Cardinals could only muster 4 runs. This was a good win for the Cardinals, as they were underdogs at 105.0. In their 14 games as the underdog, their straight-up win percentage sits at 43.0%. With this result, the Cardinals and the Giants combined to fall below the over-under line of 9.0 runs. The Cardinals now have a .500 OU record of 16-16-1.

The Cardinals come into today’s game looking to turn things around, as they are just 2-3 over their last 5 games. Even though St. Louis has notched just 2 in their last 5 games, they still have a run differential in this stretch (+4). In their 5 most recent contests, the team is scoring at a rate (4.2) similar to their season-long average of 4.30. On the season, St. Louis has won more than half of their series, going 5-2-4.

Carlos Rodón gets the start for the Giants, with an overall record of 4-1. In his previous outings, Rodón is lasting an average of 5.83, putting together an ERA of just 1.8. Hits have been hard to come by against the left-hander, as his batting average allowed is just 0.165. Not only does Rodón have a strong batting average allowed, but he has also avoided giving up home runs. In his previous outings, opponents are averaging just 0.0 home runs allowed per 9 innings. On the season, Carlos Rodón has had no problem racking up strikeouts, posting a strikeout percentage of 39.0%, while averaging 8.83 K’s per game. For the season, he has struggled with command averaging 3.09 walks per outing.

The St. Louis Cardinals will send Adam Wainwright to the mound with an overall record of 3-3. To date, Wainwright has an ERA of 3.18 while lasting an average of 5.67 innings per appearance. Teams have been able to rack up runs against him, as he has a batting average allowed of 0.246. So far, Wainwright has managed to keep the ball in the ballpark, allowing just 0.53 home runs per 9 innings. Per game, Adam Wainwright is averaging 4.66, on a strikeout percentage of 20.0%. Command has been a problem for Wainwright, as he is giving up 3.44 walks per outing.

Today’s matchup between the San Francisco Giants and St. Louis Cardinals will be their 6th meeting of the season. Today’s game will be a rubber match for the two teams, as San Francisco and St. Louis each have 3 wins. Through 6th games, the series’ over-under record is 3-3, with the average run total sitting at 7.0 runs per game. The averge scoring margin in these meetings is 4.0 runs. Dating back to last season, St. Louis picked up 4 wins compared to 2, taking the season series. In these 6 meetings, the two teams combined for an over-under record of 3-3. Last year, the Giants and Cardinals averaged 7.0 runs per game. On average, the winning team won by a margin of 2.33 runs per contest.

Even though Adam Wainright is having yet another strong season, Giants starter Carlos Rodon has been dominant to start the year. So far, he has a FIP of just 1.21 and an expected ERA of 2.01. Even though the Giants were shut out in game 2, I expect them to finish off their series against the Cardinals with a win. I recommend San Francisco on the moneyline.

Free MLB Pick: Giants ML. Did you know that you can bet on games LIVE while they’re in progress? It’s GREAT to see if a pitcher has command for the day rather than guessing pre-game! The absolute best live wagering platform can be found at Bovada Sportsbook! They’ll give you a 50% bonus too!