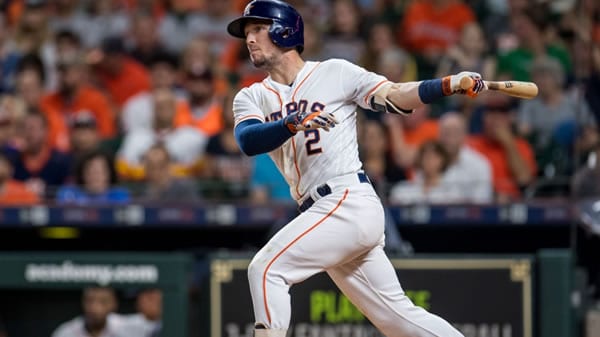 The Houston Astros staved off elimination with a Game 5 victory in this ALCS Thursday night and now look to even-up this series at three games apiece when the teams meet for Game 6 Friday night on the neutral turf out in San Diego. Tampa Bay won the first three games of this ALCS, but it looks as though momentum has shifted. How are we playing this game with our free MLB pick?

ALCS Game 6 betting odds opened Tampa Bay and Blake Snell at around -135 over Houston and Framber Valdez, with an over/under of eight runs. Both those figures were holding steady in the early betting action.

Tampa could also be bet getting upwards of +155, giving the run and a half on the MLB run line.

Tampa Bay is the designated home team for this Game 6.

The Rays lead this best-of-seven ALCS three games to two, following Houston’s 4-3 victory Thursday night. The Astros took a 1-0 lead on the first pitch of the game, which George Springer hit for a long home run, and led 3-2 through seven innings. Tampa tied it on a homer by Ji-Man Choi in the top of the eighth, but Houston won it on a Carlos Correa solo homer with one out in the bottom of the ninth.

Houston won Thursday as a +120 under on the MLB betting line, and the game played under a total of nine runs.

So the unders are now a perfect 5-0 in this ALCS, as the teams have combined to score just 30 runs.

With Thursday’s win, the Astros are now 7-4 this postseason.

With Thursday’s loss, the Rays are now 8-4 this postseason.

This pitching match-up is a rematch of Game 1 of this ALCS played last Sunday, a 2-1 Tampa victory.

Lefty Snell is 0/14 on quality starts this season and 0/3 this postseason, but those numbers are mainly due to a short leash, considering he’s yet to go six full innings in any outing. Last Sunday, in Game 1 of this ALCS, he held Houston to one run and six hits through five innings of that 2-1 Tampa victory. And in three starts this postseason he’s allowed five runs and 13 hits through 15 2/3 innings, with six walks and 15 strikeouts.

The Rays are 9-5 with Snell this season, 2-1 this postseason.

Snell also started once against Houston in the playoffs last season, allowing one run through 3 1/3 innings of a 3-1 Tampa loss.

The Astros are 7-5 with Valdez this season, 2-1 this postseason.

Valdez had never faced the Rays before last Sunday.

MORE FREE BETS! DEPOSIT $100 TO $300 AND GET A 100% DOLLAR FOR DOLLAR MATCH AT ONE OF THE WEB’S BEST BASEBALL BETTING SITES: MYBOOKIE!

Houston batted .232 this season against left-handed pitching, with a .299 team OBP and a .403 team slugging percentage.

Tampa Bay batted .238 this season against right-handed pitching, with a .324 team OBP and a .415 team slugging percentage.

The Rays bullpen posted a 3.37 ERA this season, along with a 1.19 WHIP and a 3.02 K/BB ratio. Numbers like those helped this unit rank among the top three bullpens in Baseball this year. Tampa relievers have also allowed six runs through 21 innings of work in this ALCS.

The Astros bullpen put up a 4.39 ERA this season, along with a 1.52 WHIP and a 1.91 K/BB ratio. Numbers like those “helped” this unit rank among the bottom half-dozen or so bullpens in Baseball this year. The Houston pen has also allowed seven runs through 19 innings in this ALCS.

Snell owns a Cy Young Award and the better name recognition, but we’re calling this pitching match-up a push. However, Tampa holds a slight edge in the splits with the sticks and a larger advantage in the bullpen comparison. Momentum may have shifted in this series, but it could shift right back with one or two swings of the bat. We like the Rays to finish this ALCS off Friday night. Note: 5Dimes has left the market but you can still wager on games at reduced odds (overnight nickel lines on MLB, -105 odds on sides/totals for hoops/foots) at BetAnySports! Get your reduced vig back! It’s the only way to bet! Click here to get rolling!