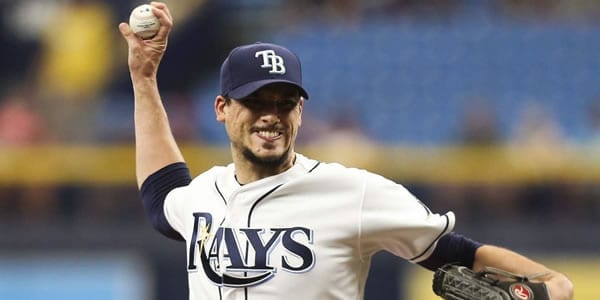 Moneyline: Astros +110/Rays -120 (BAS - 5Dimes may have left the market, but you can still bet on games at the same reduced odds here!)

The American League Championship Series comes down to a deciding Game 7 between the Houston Astros and the Tampa Bay Rays Saturday evening in San Diego. Tampa won the first three games of this ALCS, while Houston’s won the last three, becoming the second team in MLB history to rally from a 3-0 deficit to force a Game 7. Can the Astros pull off the unlikely comeback? Can the Rays avoid the embarrassment of losing after owning a 3-0 lead? And who do we like here for our free MLB pick?

ALCS Game 7 betting odds opened Tampa Bay and Charlie Morton at -125 over Houston and Lance McCullers, with an over/under of eight runs. Early betting action then dipped the Rays about a nickel, to -120.

Tampa could also be found getting upwards of +165, giving the run and a half on the MLB run line.

Tampa Bay is the designated home team for this Game 7, based on the better record during the regular season.

Houston forced this Game 7 by taking Game 6 Friday night 7-4. The Astros spotted the Rays the first run of the game in the second inning, then broke loose with four runs in the fifth, one in the sixth and two in the seventh, then and hung on from there for the victory.

Houston won Friday as a +115 underdog on the MLB betting line, and the game played over a total of eight runs.

With Thursday’s win, the Astros are now 8-4 this postseason.

With Thursday’s loss, the Rays are now 8-5 this postseason.

This pitching match-up is a rematch of Game 2 of this ALCS played Monday, a 4-2 Tampa victory.

Former Astro Morton is 0/11 on quality starts this season, and 0/2 this postseason, because he’s yet to pitch six full innings in any outing. But that doesn’t mean he hasn’t been effective. Monday, in Game 2 of this series, he held Houston scoreless on five hits through five innings, with one walk and five strikeouts, in that 4-2 Rays win. And five days before that, in the ALDS against the Yankees, Morton allowed two runs – one earned – on four hits through five frames of an 8-4 Tampa victory.

Over his last four starts against the Astros, the one earlier this week and three last season, Morton allowed nine runs and 18 hits through 19 innings. Tampa won three of those four games.

McCullers is 6/13 on quality starts this season, one-for-two this postseason. Monday, he allowed four runs – although only one was earned – on four hits through seven innings, with 11 strikeouts against zero walks, in that 4-2 Houston loss. But seven days before that, in the ALDS against Oakland, he got touched for five runs and eight hits, including three homers, through four innings, although the Astros eventually won that game 10-5.

On the season, Houston is only 6-7 with McCullers, 1-1 this postseason.

Monday’s game was McCullers’ first start against the Rays since 2018.

Houston batted .244 against right-handed pitching this season, with a .318 team OBP and a .410 team slugging percentage.

The Tampa bullpen posted a 3.37 ERA this season, along with a 1.19 WHIP and a 3.02 K/BB ratio. Numbers like those helped this unit rank among the top three bullpens in Baseball this year. But Rays relievers have also allowed 11 runs through 26 innings of work in this ALCS.

The Houston bullpen put up a 4.39 ERA this season, along with a 1.52 WHIP and a 1.91 K/BB ratio. Numbers like those “helped” this unit rank among the bottom half-dozen bullpens in Baseball this year. The Houston pen has also allowed ten runs through 22 innings in this ALCS.

We give Morton the edge in the pitching match-up, and Tampa Bay, despite its performance Friday night, still owns the advantage in the bullpen comparison. Also, while Houston has Big Mo on its side at the moment, that can change in almost any half-inning. We like the Rays to win this Game 7. Are you a small bettor that doesn’t qualify for bonuses at most books? Check this out! Deposit $25 and get a FREE $50 bet at a sportsbook that’s been online since the 1990’s! —-> Intertops! (Must use bonus code: ROOKIE200