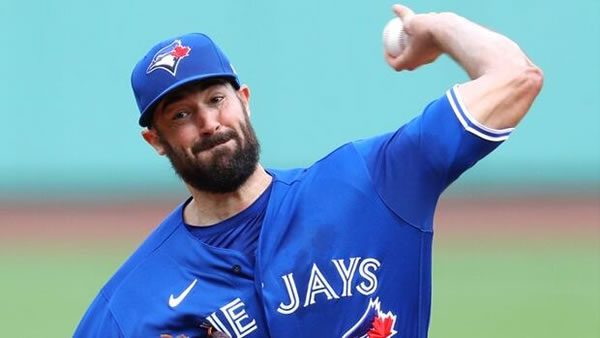 (Get the best lines at BetAnySports >>> Their less juice option allows you to bet on games at reduced odds and NFL/NBA at -105 instead of -110!)

When these teams get together, it’s reasonable to expect a lot of runs, given that both teams are as good as it gets when it comes to producing runs. The Blue Jays average 5.16 runs per game and the BoSox are just a shade behind that at 5.09. Throw in that neither team is all that proficient on defense, and you can see why the totals between these teams are regularly in double digits.

For most of the year, the oddsmakers have had it exactly right when Toronto and Boston face off. Monday marked the 12th meeting of the year between the teams, and nine of the first 12 have seen at least nine runs scored. Prior to Monday night, the teams had usually been zooming past the total, as three of the previous four meetings had seen at least 11 runs, and two had topped 15. Over their past six games, the offenses have produced plenty: Boston’s averaging 6.17 runs per game, and Toronto is just a shade worse at 5.66. Unless the respective pitchers are on, this could be another high-scoring affair.

The big question for the Blue Jays is whether Robbie Ray can miss enough bats to give the Jays a shot to bring home the win. In his most recent start against the Red Sox, he couldn’t keep the ball in the park, and he couldn’t record enough strikeouts, as he gave up three homers and only struck out four, his lowest total since April 18. In the end, Ray had as many earned runs charged to him as he did strikeouts, which hadn’t happened all season.

But it’s not like Boston just intrinsically owns Ray because Ray was the aggressor in a previous matchup and came out on the winning end. Having his team provide 18 runs’ worth of offense certainly didn’t hurt, but Ray did his part by striking out 10 Boston hitters and holding the Red Sox to just five hits in the contest. The Red Sox did touch him for three runs, and although that was excused by the fact that the Jays put up enough runs to give Ray some free mistakes, that does suggest that Boston has a good idea of how to cause problems for the Toronto left-hander.

NCAA FOOTBALL IS COMING! BE SURE TO BOOKMARK OUR FREE COLLEGE FOOTBALL PICKS PAGE AS WE’LL BE COVERING ALL THE BIG GAMES!

Sticking around for the finish really hasn’t been Garrett Richards’ style. Heck, sticking around for the end of the sixth inning really hasn’t been his style. It’s probably a good thing for Boston’s opponents that it isn’t because if Richards were able to pitch into the sixth inning and beyond, history says that it likely wouldn’t go well for the other side.

For one stretch in May, Richards pitched like a throwback to the old days when pitchers went as long as they could, getting through the sixth inning in four out of five games and earning a win in all four of them. But lately, Richards has had enough trouble just staying in games, as he gives up far too many hits and walks. Worse, he doesn’t balance things with strikeouts, as he’s struck out six hitters or fewer in his past 13 trips to the hill. Plus, the Jays have shed their free-swinging reputation and are now a team that rarely strikes out. Only Houston tends to do a better job of putting the ball in play than Toronto, and with the Jays hitting well, this could be another game that pushes the total higher.

It shouldn’t be too terrible in Boston weather-wise. Temperatures are expected to drop to a comfortable 78 degrees by first pitch, with winds blowing in from right-center at six miles per hour.

Toronto is having trouble staying in the race, but Richards is really not the right person for this job. He’s not been great at limiting his WHIP, he’s facing a team that won’t make mistakes and hands him a few free outs, and he’s given up four runs or more in five of his past seven appearances on the mound.

Typically, I’d go for the home dog here, but I just can’t get past the fact that the Jays are swinging their bats well, and the Red Sox don’t have a great pitching matchup here. I’ll take the Blue Jays to get this one. Bet today’s MLB picks FREE by scoring a sweet 200% bonus! It’s small, but valuable! —> Simply deposit $25 and they’ll give you an extra $50 FREE when you enter bonus code ROOKIE200 before placing your first bet at Intertops Sportsbook!