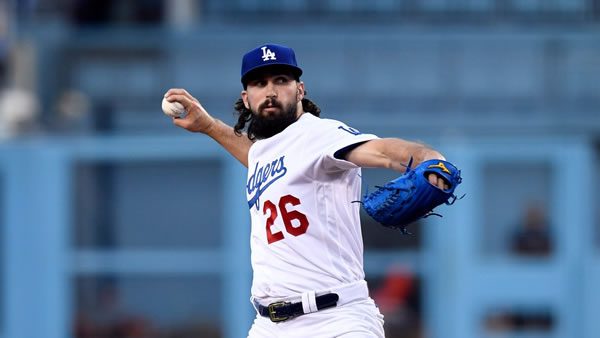 In Los Angeles’s last game, they fell to San Diego by a score of 5-3. Los Angeles’s pitching staff finished the game by allowing 9 hits, leading to 5 runs. The Dodgers ended the game with just 3 runs on 11 hits. Dodgers suffered the loss, despite being favored at -185.0. Through 160 games as the favorite, the team has found the win column at a rate of 69.0%. Together, the Dodgers and San Diego combined to surpass the over-under betting line set at 7.0 runs. On the season, Los Angeles’s over-under record is 69-83-12.

In their last 5 games, the Dodgers are below .500, at 2-3. Despite their below .500 record (last 5), in this stretch, the team still has a positive run differential at +1. On offense, Los Angeles’s offense has experienced a dip in production, averaging 3.4 runs per game over their last 5 contests. So far, Los Angeles has won over half of their 51 series played, going 37-10-4.

San Diego is coming off a 2-run win over the Dodgers (5-3). For the game, the pitching staff held the Dodgers to 3 runs on 11 hits. At the plate, the Padres scored 5 times on 9 hits. This was a good win for the Padres, as they were underdogs at 165.0 on the moneyline. So far, the team has gone into 47 games as the underdog, still finding the win column at a rate of 47.0%. In terms of the over-under, the Padres and Dodgers combined to surpass the line of 7.0 runs. Against the run total, San Diego is just 78-83-6.

In their last 5 games, the Padres have put together a record of 3-2. During this time, the team’s run differential sits at +8. San Diego is still playing winning baseball, even with their offense averaging just 4.8 runs per game, compared to a season-long mark of 4.37. On the season, San Diego has won more than half of their series, going 27-18-8.

Los Angeles will roll with Tony Gonsolin (16-1) as their starter. Through 24 appearances, Gonsolin has an ERA of just 2.14 while averaging 5.42 innings per appearance. Hits have been hard to come by against the right-hander, as his batting average allowed is just .172. Home runs have not been an issue for Gonsolin, as he is giving up just 0.76 HR/9. On the season, Tony Gonsolin has had no problem racking up strikeouts, posting a strikeout percentage of 24.0%. This includes a per-game average of 4.96 K’s per game. Command has been a problem for Gonsolin, as he is giving up 2.42 walks per outing.

Blake Snell gets the start for the Padres, with an overall record of 8-10. To date, Snell has an ERA of 3.45 while lasting an average of 5.33 innings per appearance. Snell will take the mound with a BA allowed of .218. This year Snell is allowing just 0.77 home runs per 9 innings pitched. In terms of strikeouts, Blake Snell has a strong K% of 32.0%, including a per-game average of 7.12. Command has been a problem for Snell, as he is giving up 3.59 walks per outing.

For the season, the Los Angeles Dodgers and San Diego Padres will be playing their 22nd game of the season. So far, Los Angeles is leading the season series, 15-6. The over-under record in this series sits at 10-9. The average run total in these games is 8.21 runs per game. In these matchups, the average scoring differential sits at 4.19 runs.

Leading into Friday Night’s NL Divisional Round matchup between Los Angeles and San Diego, the Dodgers have a slight edge on the moneyline. Even though the Padres evened the series in game 2, I expect them to struggle vs Tony Gonsolin. In his last outing vs San Diego, the Dodgers’ right-hander pitched five scoreless innings in a win for the team. He’ll need help as he is still nursing a forearm strain, but I recommend taking the Dodgers on the moneyline.

Free MLB Pick: Dodgers Moneyline. Bet your MLB playoffs picks for free by scoring a 100% real cash bonus on your first deposit of $100 to $500 when you use bonus code PREDICTEM at Betnow Sportsbook!